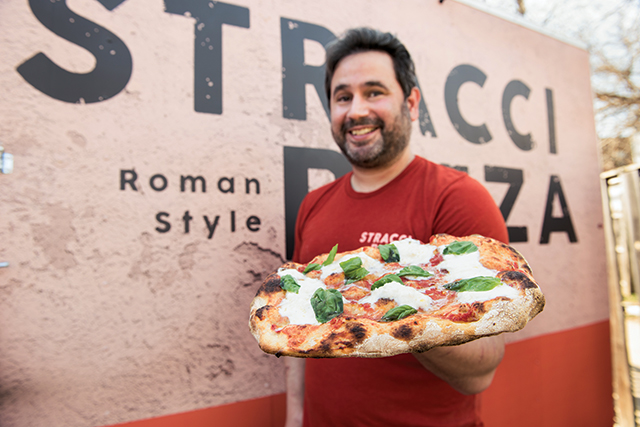 Tom Cardarelli had a plan. He would leave his executive chef’s job at Alexandria’s Vermilion restaurant, take some time off and then open a place of his own—probably a pizzeria.

The plan hit a snag. “I quit in February 2020, the worst possible timing,” he says. “Anyone interested in partnering up with me didn’t want to open a restaurant.” So he opened a food truck, tricking out a 20-foot trailer with a 600-degree, propane-powered Bakers Pride deck oven. Soon he was turning out Roman-style pies from a parking lot on Hume Avenue in Del Ray under the name Stracci Pizza, a venture he runs with his wife, Annalisa.

Stracci is short for stracciatella, which is pulled mozzarella cheese (Cardarelli makes his own) that’s then shredded and soaked in cream. The word also means “rags” in Italian. “It signifies humble beginnings. Hopefully this will become bigger than just a trailer,” the chef said during a phone call in early March.

It already has. Shortly after that call, Stracci Pizza announced that it would be occupying the building next to the lot where the truck is parked (the former Emma’s Espresso and Wine Bar space), selling drinks and snacks inside while continuing to serve pizzas from the trailer.

Roman-style pizza differs from Neapolitan-style in that the dough contains olive oil and the pies are rectangular. Cardarelli uses a sourdough crust that undergoes a slow, cold fermentation for 72 hours, and a simple sauce made with organic

Bianco DiNapoli tomatoes. Each pie is constructed with a two-step baking process directly on the hearth. A first pass with a light coating of sauce and minimal toppings allows the crust to expand, followed by more toppings and a second pass through the oven. The result is a crisp, light, airy pizza that’s thicker than New York-style but thinner than Detroit-style.

The chef makes a limited supply of pizzas daily, so preordering is a must. His appetizers and desserts shouldn’t be passed up, either—especially the chicken-liver toast and the Marcona almond tart.