Travel ideas for those who are itching to get outta dodge.

In Baltimore, The Maryland Zoo’s Penguin Coast is home to one of North America’s largest African penguin colonies and a successful breeding program for the endangered species. This new permanent exhibit, which opened in September, offers numerous vantage points to watch more than 60 penguins swim, climb and waddle in a re-creation of their natural habitat along South Africa’s coast. You can see the birds above the water from pathways and piers that surround the exhibit, or spy them from underwater viewing posts as they zip through an 8-foot swim channel and bob in tidal pools. Learn more about their habits during the African penguin keeper chats (1 p.m. daily and included with regular admission price of $18 for adults, $13 for children 2-11, free for children under 2). For an extra $45 (per adult and child age 2 and up), a program called Penguin Encounters allows you to meet the animals “beak to cheek” during a guided tour. For more information, visit www.marylandzoo.org.

Set within the resort’s 600-acre property, the course has a 16th hole modeled after the famous 15th hole at North Berwick in Scotland, and the 18th hole offers a panoramic view of the Blue Ridge Mountains and the inn. Keswick Hall offers a stay-and-play package that starts at $299 (superior room, single occupancy for one night) and includes one round of golf with a cart. Additional guest charge: $80. For more information, visit www.keswick.com. 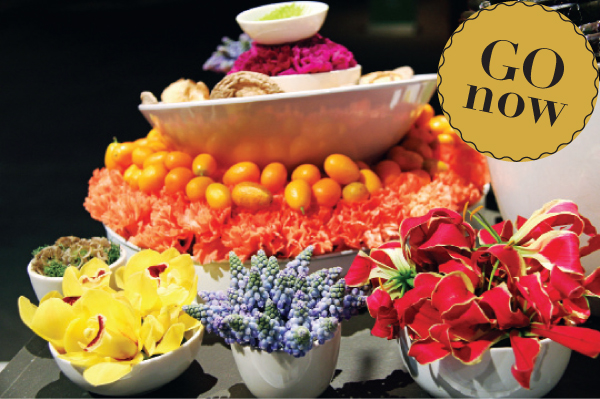 The Philadelphia Flower Show is the world’s largest indoor horticulture event. Held almost every year since 1829, this weeklong show invites world-renowned landscape designers to transform the Pennsylvania Convention Center into a 10-acre floral fantasyland according to a theme. This year’s show, which runs from Feb. 28 to March 8, is called “Celebrate the Movies.” It will include an art deco theater marquee of flowers and lights in blazing colors, and a garden that reimagines 1920s movie palaces with columns of Italian cypress and palm trees, grand chandeliers of blossoms and jewels, and hundreds of elegant calla lilies. And that’s just the grand entrance.

In addition to the displays, the flower show hosts competitions (akin to the Olympics of horticulture), early-morning VIP tours, gardening lectures, and after-dark theme nights (such as a Girls’ Night Out and an LGBT party) with entertainment, food and drinks. Throughout the convention center, you’ll find small restaurants inspired by the movies—think the Old West and a 1950s malt shop. Tickets for the show, special events within the show and hotel package information are all available at www.theflowershow.com.

Island and Mexican getaways are now easier to plan and more affordable thanks to Southwest Airlines’ expanded roster of flights direct from Baltimore/Washington International Airport. When it was added in April 2013, San Juan, Puerto Rico, was Southwest’s first destination beyond the contiguous states. Since then, the airline has debuted direct flights to Aruba, Jamaica, Nassau (Bahamas), Punta Cana (Dominican Republic) and Cancun, Mexico. Service to San Jose, Costa Rica, is scheduled to begin in June.