The Arlington Ridge eatery offers a little something for everyone. 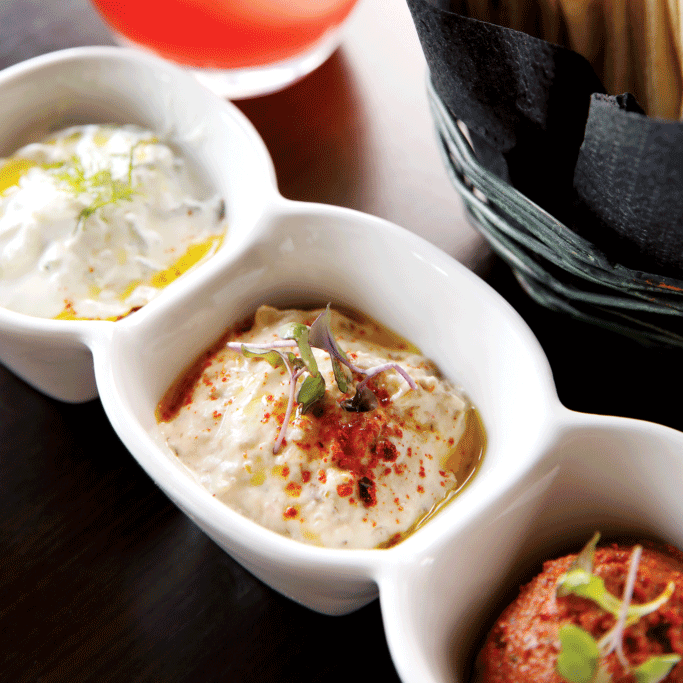 You can hear your appetizer sizzling as the server makes her way to your table with a small cast-iron skillet. Upon presenting its contents—a square of Greek kefalograviera cheese, seared to a golden brown—she steps back, douses the cheese in brandy and dramatically sets it ablaze. Once the flames subside, it’s time to savor the utter satisfaction of warm, gooey, briny saganaki—in this case finished off with a pert splash of lemon juice.

This is one of the delights at Delia’s Mediterranean Grill & Brick Oven Pizza, an upscale casual eatery that opened in Arlington Ridge in April, replacing Tazza Kitchen. 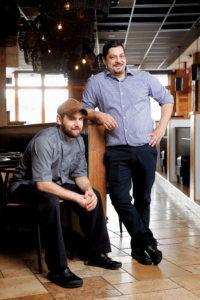 Delia’s is part of a small local chainlet owned by the Theodorou family. “It’s complicated,” explains George Theodorou, who, with his sister Alki, owns this place, along with the Delia’s they opened in Alexandria in 2009. “Have you ever seen My Big Fat Greek Wedding? Our family relationship is like that.” Their parents, Ted and Soula, who came to the U.S. as Greek Cypriot refugees, run two family-style diners called Delia’s Pizzeria & Grill in Springfield and Sterling. Another sister, Vicky, owns the Delia’s catering business, as well as a higher-end catering operation called Heirloom Catering & Event Design in Falls Church.

George says he and Alki chose the Arlington Ridge space for their latest expansion because it had good bones and didn’t require a major build-out, only cosmetic work. For that, they turned to Washington, D.C., architect and designer Michelle Bove and her firm, designCASE. The restaurant’s exterior looks like an industrial farmhouse, clad in reclaimed barnwood with a black steel awning. A private patio with modern, lime-green chairs seats 80.

Inside, the shabby-chic motif includes white brick walls, wicker lampshades, macramé plant hangers and rustic wood beams, with seating for 155, including 21 at the bar. Rounding out the homey vibe are thick wool blankets hanging from metal dividers that look like giant towel racks. “Are they Greek?” I ask the manager. “No,” he answers. “West Elm.”

Chef Chad Weise, whose pedigree includes posts at the Occidental Grill, Floriana Restaurant and City Tap House in the District, oversees a menu emphasizing Greek-inspired dishes, house-made pastas and brick-oven pizzas. Recipes for certain items, such as the Greek dips and the pizza sauce and dough (the dough’s surprise ingredients are Coca-Cola and beer) are Ted Theodorou’s and are therefore sacrosanct.

I start off one late-spring evening with a trio of dips and a glass of dry French rosé. The roasted eggplant dip is creamy and garlicky, punched up with acidic bits of preserved lemon, and the tzatziki (cucumber and yogurt) is bright with dill. Rounding out the triad is harissa, a house-made spicy red-pepper paste. It’s really too thick to qualify as a dip, but it has a terrific kick, so I save it to use as a condiment throughout my meal. (It’s great on lamb chops!)

But first, back to the starters. Don’t miss the chicken wings at Delia’s. They’re glazed with a Calabrian chili barbecue sauce and grilled to a crunchy, caramelized char—just what you want in a wing. Cucumber ranch dressing provides the perfect counterpoint to their chili zing.

Another solid appetizer choice is the fried calamari, which arrives well-seasoned and tender, topped with lemon aioli and served with a ramekin of marinara sauce. I recommend skipping the pasty zucchini fritters and the burrata, the center of which was grainy rather than creamy and a bit off, with a blue-cheese-like tang.

Among the entrées, the grilled lamb chops (three thick ones) kissed with rosemary, oregano and garlic hit the spot. So do two enormous skewers of chicken souvlaki, served with grilled yellow tomatoes and roasted red-pepper sauce, although they could have used a minute or two less on the grill. 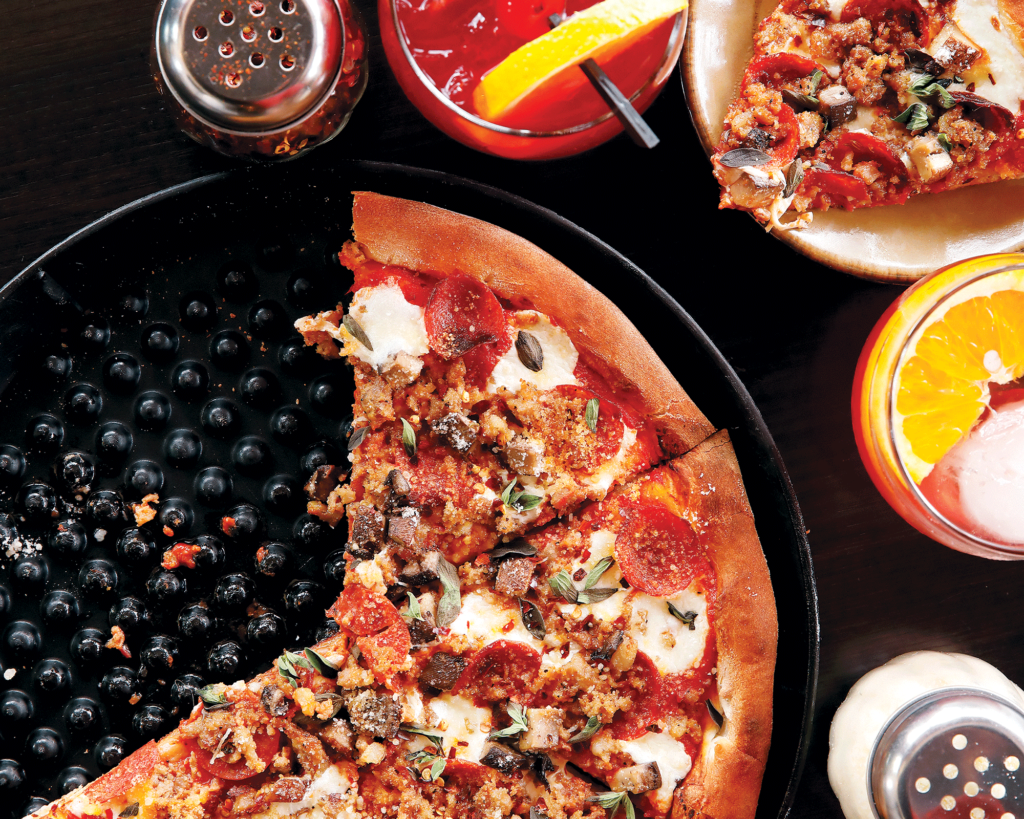 A handsome tiled pizza oven forms the centerpiece of the open kitchen, but unlike its predecessor, Delia’s doesn’t use wood to fire it—only gas. That’s too bad. The pizzas I sampled on two occasions lacked the airy bubbles, char and faint smokiness of superlative pizza. The Classico (tomato sauce, sausage, pepperoni, mushrooms, mozzarella) had a nice flavor thanks to its garnish of Parmesan, oregano and chili flakes, but it was underbaked; the dough under the sauce was essentially raw.

The same was true of the pepperoni, mushroom and red onion pie I tried on a different visit. A few more minutes in the oven could have turned frowns upside down. (Although both pies were fine once reheated and eaten for breakfast the next day.)