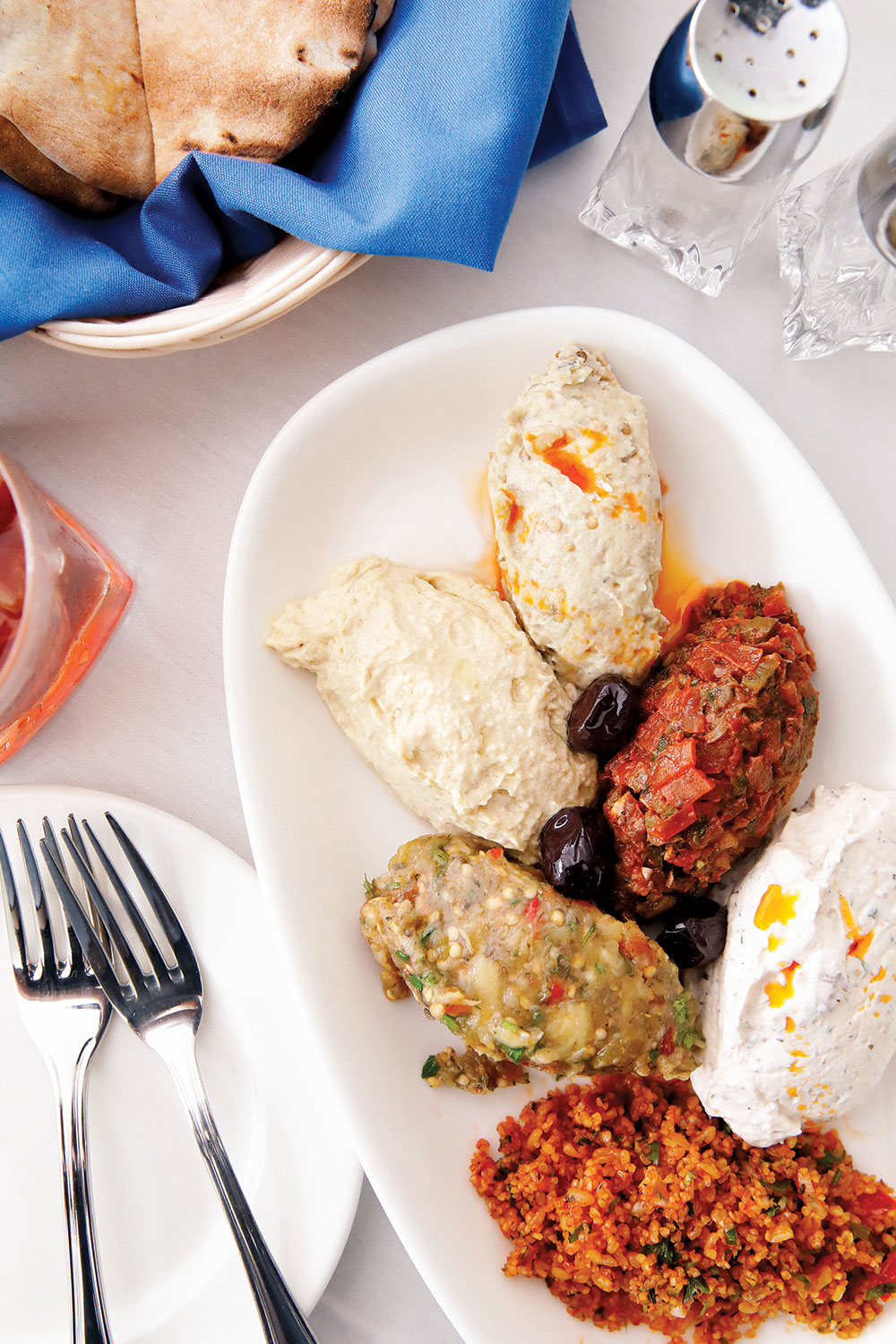 I’m going to make this easy for you: Order the mixed cold meze platter as soon as you sit down at Istanbul Grill. This superlative sampler of chef/owner Turgut Yigit’s dips, spreads and salads proves a fine introduction to the Turkish restaurant that opened in June in Arlington’s Bluemont neighborhood. The medley is served with warm pita bread—which arrives at the table with a ramekin of olive oil and balsamic vinegar dotted with cured whole black olives—and best washed down with Turkish beer. On my first visit, the platter included a zesty salad of tomatoes, peppers, red pepper paste, mint and parsley (ezme); thick, garlicky hummus; a Turkish tabbouleh (kisir); smoked eggplant salad; yogurt and walnut spread (haydari); and baba ghanoush, a purée of smoked eggplant, tahini, garlic and lemon juice.

Some of the hot appetizers are also noteworthy. A rich and tangy soup made with yogurt, milk, rice and mint is a good starter as cold weather sets in. Thick eggplant slices, sautéed and then baked, are crowned with a yogurt-garlic sauce and a drizzle of tomato-infused olive oil. The verdant zucchini pancakes (mucver), flecked with dill, scallions and parsley, are topped with the same yogurt-garlic sauce, albeit too much of it (ask for the sauce on the side so you can control the amount).

However, you can skip the phyllo pastries stuffed with spinach and cheese (borek). They satisfied my crunch craving but were cold inside. And while the falafel patties were nicely spiked with herbs, they were pasty in texture and therefore unappealing. 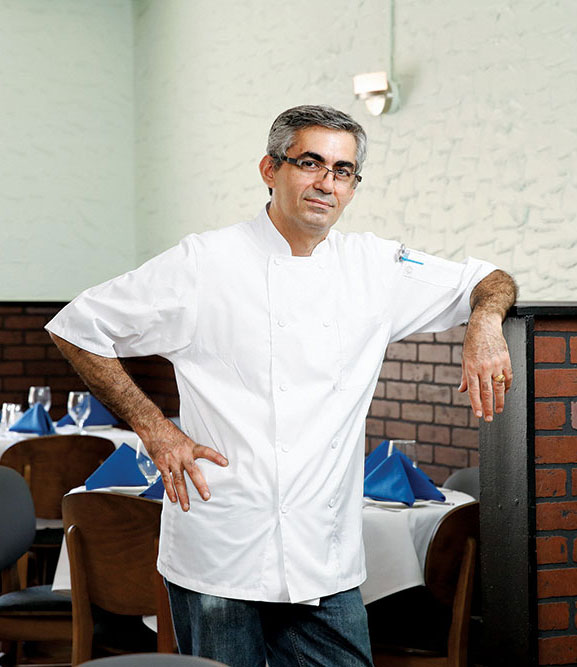 Yigit, 49, grew up working in his parents’ eatery in Hatay Province in southern Turkey, eventually landing a kitchen job in Istanbul. He came to the U.S. in 2000 to work at a restaurant in Brooklyn, then moved to Virginia eight years ago to cook at Kazan, a Turkish restaurant in McLean. Today he lives in Arlington.

Opening his own place was a lifelong dream. When he heard from friends that El Ranchero Bar and Grill on Wilson Boulevard was for sale, he bought it, promptly replacing its heavy, dark décor with midcentury modern chairs, mint-green stucco walls and chrome fluorescent light fixtures. The eatery seats 50 in its main room, 20 in the bar and 24 on the patio.

Though the interior’s faux-brick wainscoting and brown floor tiles remain, there’s no more bric-a-brac on the walls and the ceiling fans are gone. The place certainly feels open, airy and a tad more elegant with the introduction of tablecloths. (And our server, Funda, deserves a special shout-out for her graciousness and eager-to-please service.) But the empty walls beg for artwork. Just a few small touches—even bric-a-brac!—would lend a bit more personality and ambiance. Perhaps in due time.

Kebabs, a cornerstone of Turkish cuisine, are the main attraction in the entrées category, and the mixed grill is a worthy undertaking. It includes a chicken chop (a thigh resembling a large drumette); large, tender cubes of lamb; Adana kebab (seasoned ground lamb); and doner kebab—that well-known, juicy spectacle of rotisserie-cooked veal and lamb layered into a cone shape on a large skewer. 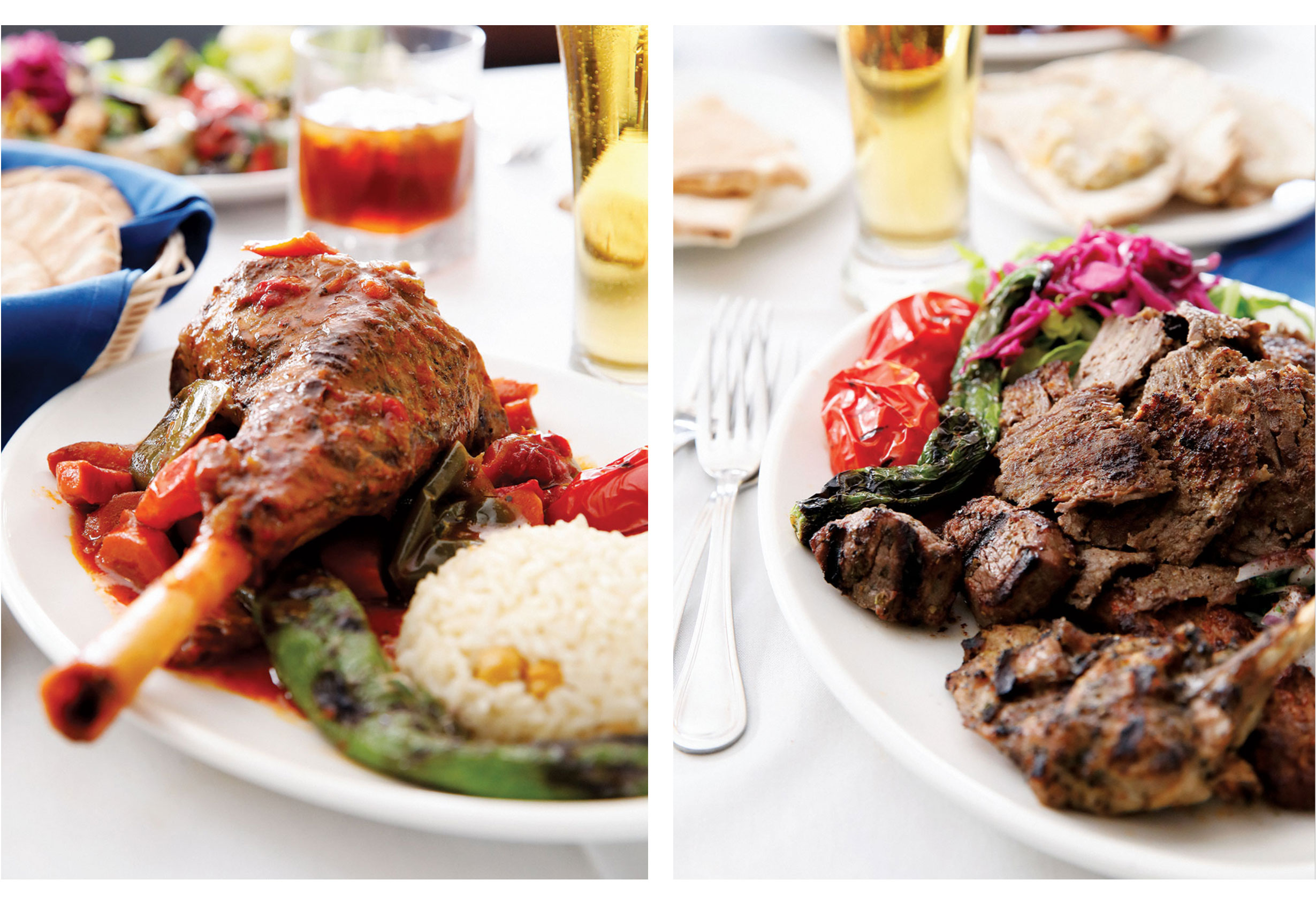 Yigit’s doner is up there with the best I’ve had; the thin meat slices, with their notes of garlic and oregano, are succulent, but with a touch of crispiness. The very ample platter comes with rice-and-chickpea pilaf, pickled red cabbage, a grilled plum tomato and a grilled Italian pepper that is five-alarm hot, so beware. That same hot pepper makes an appearance on the braised lamb shank in tomato sauce. Here, the meat is meltingly tender and satisfying, even if its bland sauce could use a bit more oomph.