This chic, family-owned taverna in the Mosaic District will put you in a Greek state of mind. 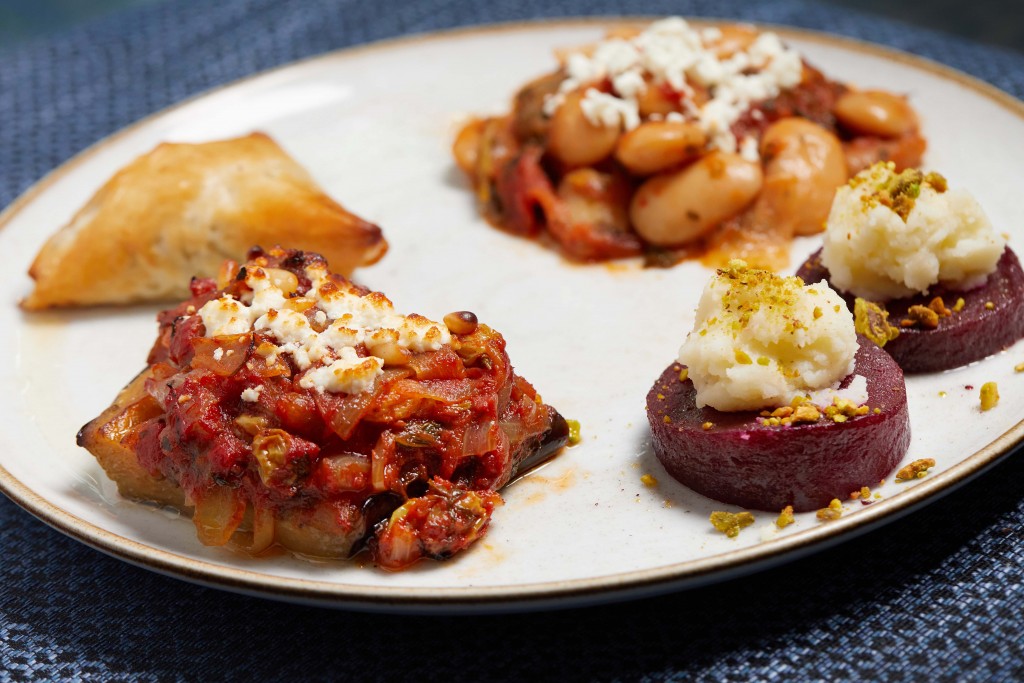 Vegetarian appetizers at Our Mom Eugenia. Photo by Deb Lindsey

Were it not for the pandemic, I would have gone to Greece this past summer. Instead, I settled for the next best thing—lounging under a striped umbrella on the charming Aegean blue patio of Our Mom Eugenia in the Mosaic District, where I happily swiped grilled pita triangles through a smoky roasted eggplant spread while watching co-owner Phil Hobson debone a grilled branzino, tableside, with surgical precision.

Sipping crisp, cold Xinomavro rosé (all the wines and beers on the restaurant’s list are Greek imports) and tasting that ultra-fresh fish—dressed simply in olive oil, lemon, oregano and salt—almost transported me to those blithe days on Paros, Syros and Naxos.

Hobson’s mom, Eugenia, is the restaurant’s namesake chef. A native of Zakynthos, an island in the Ionian Sea off Greece’s west coast, she learned how to cook from her mother and grandmother and at boarding school in Athens. Her professional cooking career spans more than 40 years. In the DMV, her résumé includes stints at Athenian Plaka (now closed) and Mykonos Restaurant in Rockville, Maryland. She became the chef of Nostos Restaurant in Tysons in 2011. 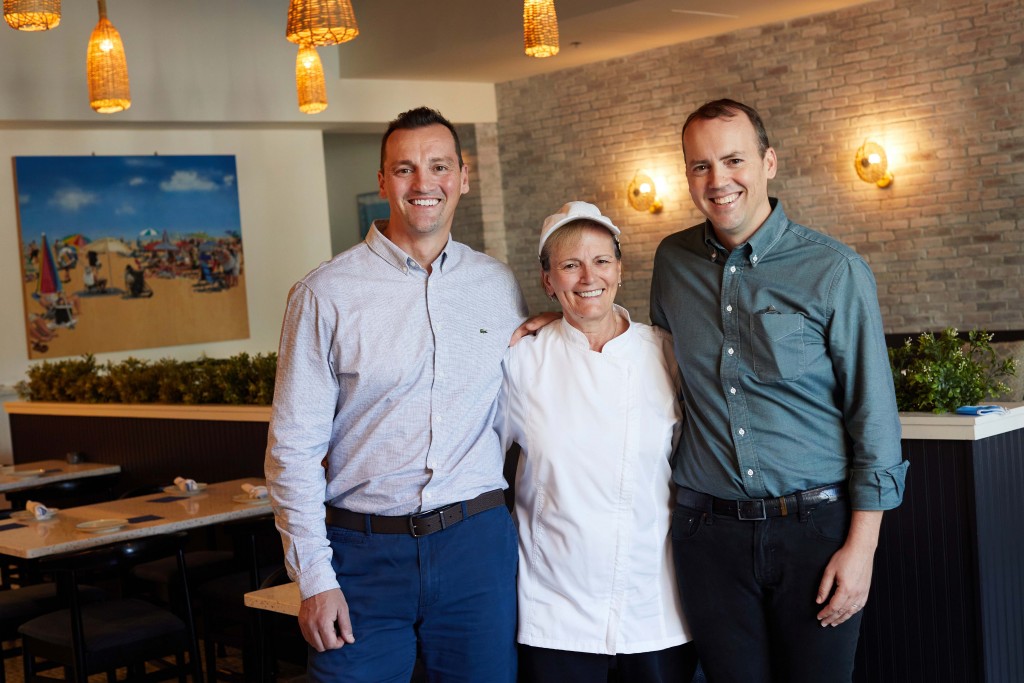 Eugenia and her two sons, Phil and Alex (baby sister Barbara works for Marriott Corp.), opened the first Our Mom Eugenia in Great Falls in December 2016. It was so successful that Edens, the landlord-developer of the Mosaic District, came calling. After five months of pandemic delays, their second taverna, which seats 60 inside and 54 in two outdoor dining areas, opened in Mosaic in August of 2020.

If you aren’t starting a meal with a Fix pilsner or a glass of Assyrtiko white wine from Santorini, sip a bracing martini made with ouzo (the anise-flavored spirit that is a Greek staple), vodka, pineapple juice and orange juice while sopping warm, toasted bread in rosemary-infused Peloponnesian olive oil. 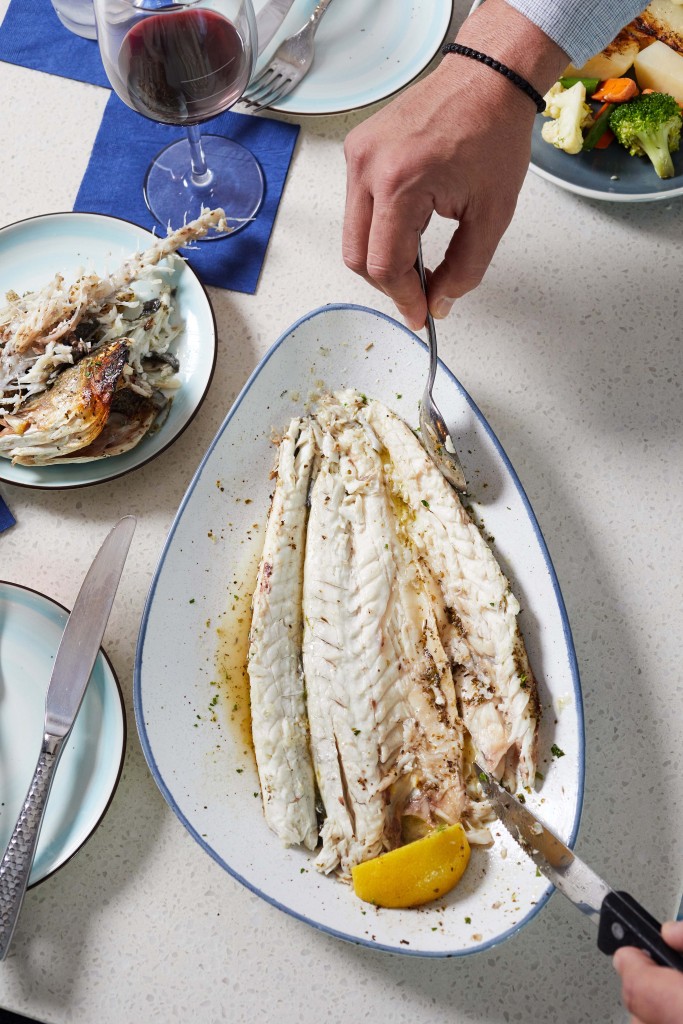 A deliciously winning appetizer strategy is to order the vegetarian platter for the table. The medley includes spanakopita (phyllo, spinach, dill and feta pie); gigante beans stewed in tomato sauce; marinated beets topped with pistachios and skordaliá, a garlicky potato spread; and roasted eggplant with feta, raisins and pine nuts. Be sure to add an order of stuffed grape leaves—with or without ground beef—which are served on a lemony hollandaise-meets-vinaigrette dressing.

The chef does fried appetizers deftly. Nibble on zucchini fritters with tzatziki, or the delicate, batter-coated cod fingers with skordaliá. (My Greek dinner companion thought the skordaliá needed more garlic, but everyone has their own garlic threshold.) Hearty soups—especially the porridge-like avgolémono made with chicken stock, rice and lemon—take the edge off a winter chill. 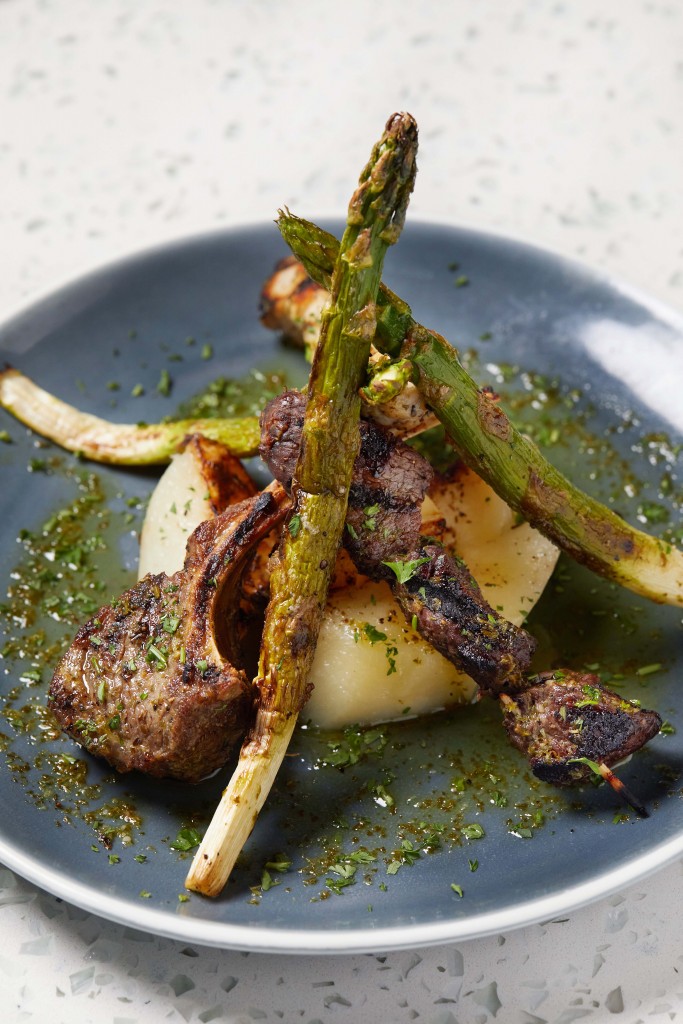 Moving to entrées, a dish of tender lamb falls away from a braised shank with the mere touch of a fork, its tomato sauce melding nicely with a bed of toothsome orzo. It’s a quintessential cold weather rib-sticker. The restaurant’s rendition of moussaka, which finds layers of eggplant, zucchini, ground beef and potatoes baked with nutmeg-laced bechamel sauce, is better than most.

Eugenia Hobson’s skill is particularly evident in the simplest dishes, such as the aforementioned branzino, or in a mixed grill whose elements—a thick lamb chop, skewers of chicken and beef filet, and asparagus spears—are cooked perfectly and kissed with lemon, olive oil and herbs. However, an ensemble of mussels, shrimp and calamari in tomato sauce, served over orzo, proved lackluster.

I love the subtle (rather than theme-y) island-chic vibe of Our Mom Eugenia. The 2,000-square-foot space feels airy and contemporary with its white beadboard, brick accent walls, high ceilings, cement floor (stenciled with a blue-and-white Greek key pattern) and large front windows that let the light pour in. A pastel pink four-seater bar in the back has a mid-century modern sensibility. 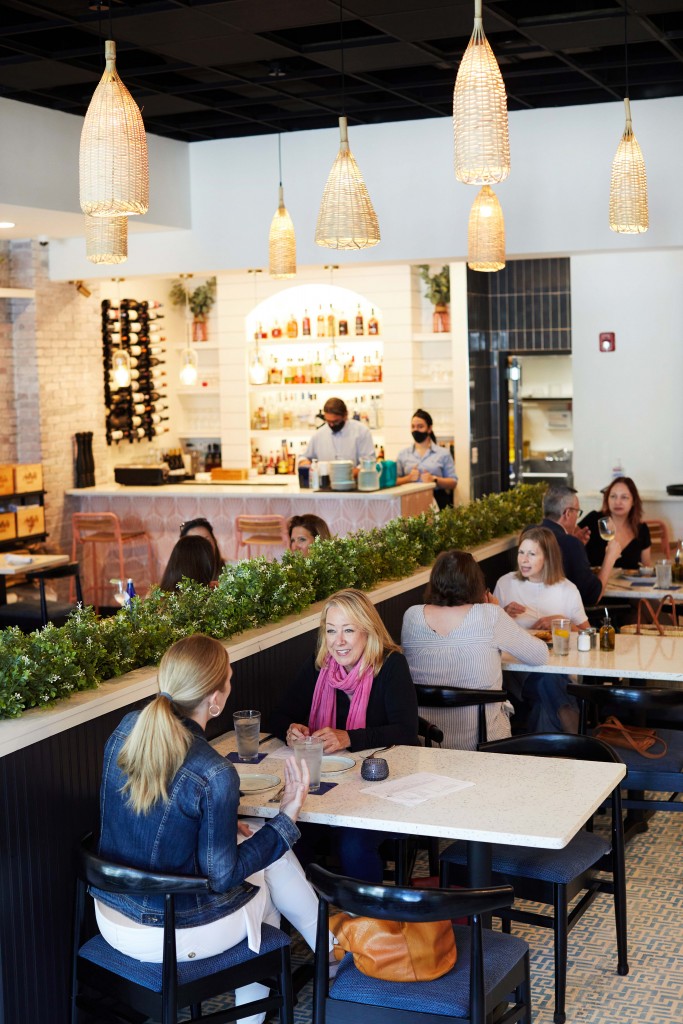 One might easily conclude that the colorful painting on the rear wall depicts a Greek beach scene, but it’s actually Jones Beach Island off Long Island. The artist is John Tsombikos, brother of Alex Hobson’s wife, Marika Tsombikos. She owns Vivid Chill boutique in Great Falls and designed the interior of the restaurant’s Mosaic location.

The Hobsons have ties to both Greece and the U.S. Eugenia’s husband, John Hobson, who is half-Greek, grew up in Washington, D.C., and entered the U.S. Air Force. He met Eugenia in Athens. They married and moved to New York City, where, post-military, he worked on Wall Street and opened multiple coffee shops in downtown Manhattan in the ’70s. All three of their children were born in New York.

The entire family moved to Greece in the ’80s, then back to the States in the ’90s. Alex went to the University of Maryland, then returned to Greece to work in telecom. Phil was a professional basketball player in Greece and Italy for 15 years before settling in Northern Virginia in 2011.

Says Alex: “I had an early midlife crisis and moved back to the states in 2015. Phil was working in the front of house at Nostos and we thought, Why not do something on our own? We have the chef already!”
And that chef is a darn good one, all the way down to the desserts—which isn’t so surprising, given that Eugenia worked as a pastry chef in Astoria, Queens, in the ’70s. 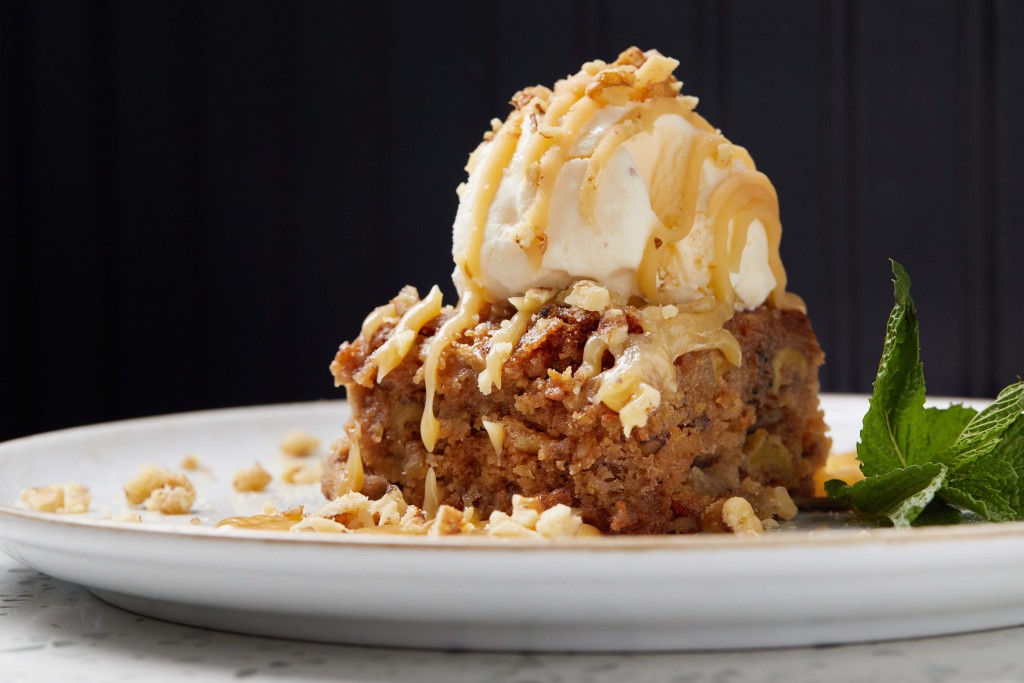 Her sweets include the requisite baklava and its bird’s-nest version made with kataifi (shredded phyllo). But the standout finale at Our Mom Eugenia is her crumbly apple cake a la mode, topped with walnuts, cinnamon and drizzles of honey.

After dessert (or as a dessert), knock back a rakomelo, a Greek hot toddy made with raki (Cretan anise-flavored grappa), honey, cinnamon, cloves and sliced orange. Mom would surely approve.

The drink list at Our Mom Eugenia includes 20 craft cocktails ($10 to $14), including classics (Kir Royale, Aperol Spritz, Cosmopolitan), plus a few with a Greek touch, such as the Aegean Fizz, made with Metaxa 7 brandy, orange juice, cinnamon and club soda. 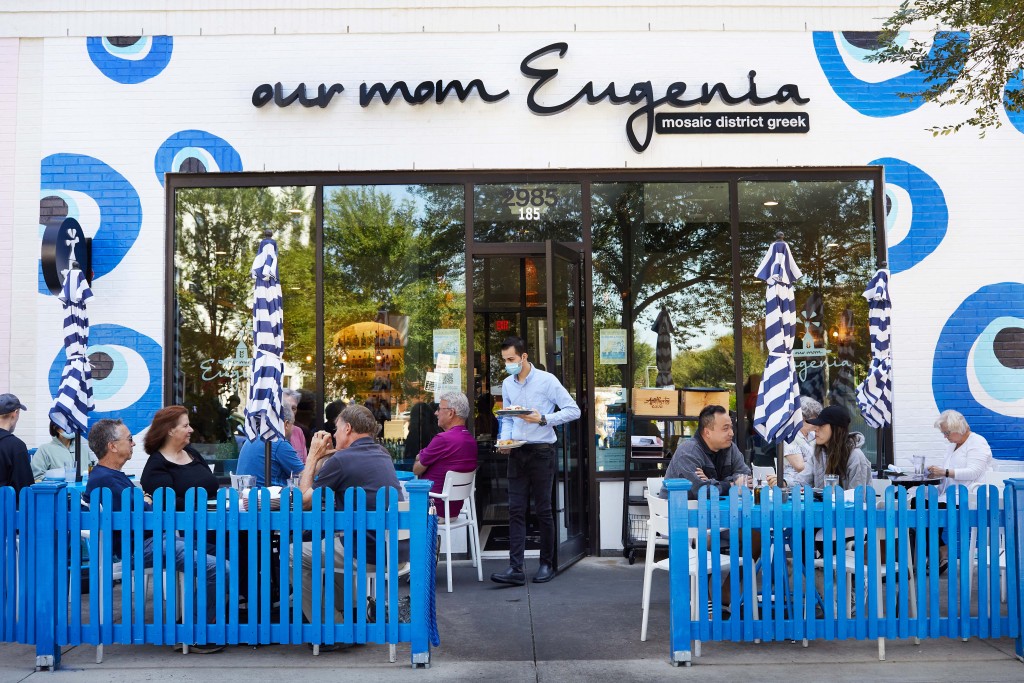 PARKING
Free, ground-level garage parking is behind the restaurant on Merrifield Cinema Drive.