Ovvio Osteria does a few things well, but inconsistency is the main thing on the menu.

Coming from a restaurant background, I always make an effort to accentuate the positive, so I will say this about Ovvio Osteria in Merrifield: The bartender mixes a good cocktail. 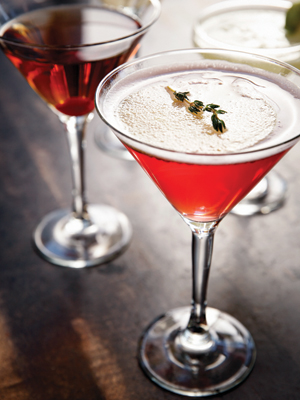 The Last Word, made with shaken Chartreuse, gin, Luxardo Maraschino liqueur and lime juice, served straight up, strikes just the right balance of herbal and citric notes; and the little granules of ice floating on top prove extra refreshing. If whiskey is more to your taste, the Smoked Manhattan is a gratifying winter elixir. Bulleit Bourbon, Cocchi Vermouth di Torino and bitters arrive in a beaker filled with smoke, which infuses the drink until the server pours it tableside. It is a truly fine cocktail—and should be for $15.

Owned by the DSF Group, a Boston-based development company, Ovvio (which means obvious in Italian) opened in the summer of 2013. The initial word was good, thanks to a fortuitous hire: Chris Watson, an accomplished acolyte of noted chef Robert Wiedmaier. But he and Ovvio parted ways barely six months later, with Watson reportedly saying that management wanted him to make changes he thought would compromise quality. His replacement, Giovanni Carlo, also lasted about six months. Chef Richard Hetzler, creator of Mitsitam Café in the

Smithsonian’s National Museum of the American Indian, took over in August and debuted a new menu in September.

Situated in a corner space in Merrifield’s new Halstead Square development, the 130-seat restaurant is heavy on comfort fare (think pizzas and pastas), but the atmosphere isn’t as comforting as it could be. The stark design elements seem copied and pasted from the present-day blueprint: poured concrete floors, bare Edison bulbs and exposed ductwork suspended from a high ceiling; an open kitchen surrounded by white subway tiles; dark-brown wooden tables and tufted brown leatherette banquettes. Beige and gray abound on walls that scream for color and artwork, their only decoration a chalkboard that lists daily specials. Orange houndstooth upholstery on comfy side chairs and bar stools provides the only splash of brightness. 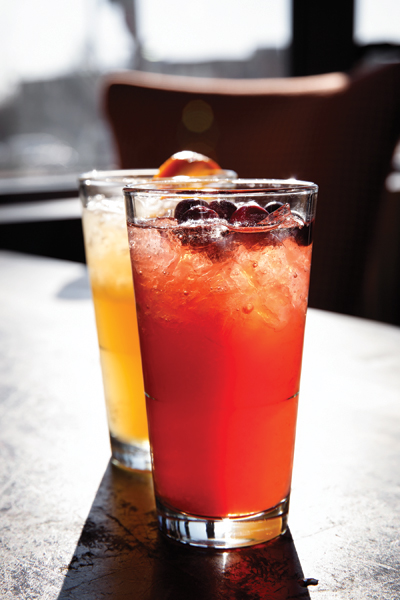 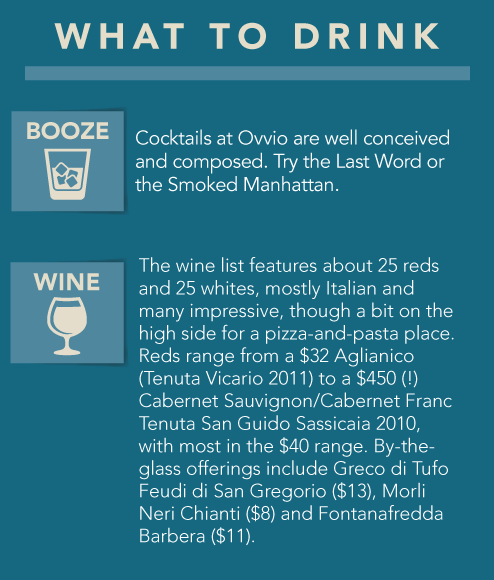 At least the service provides some warmth. On a first visit on a very cold Saturday in November, the host is affable and pleasant; the server even more so.

“Do you split pastas?” I inquire.

“We split everything,” the server replies enthusiastically. This willingness to please bodes well.

Things are off to a good start, but those high hopes are quickly dashed once our appetizers arrive. A fritto misto of calamari and vegetables is devoid of the latter, save for a single sliver of shriveled, blackened green pepper that looks like it has spent most of the night avoiding capture in the fryer. The inch-long rings and tentacles of squid are over-dredged and under-seasoned, their accompaniments of marinara sauce and parsley aioli furnishing the only suggestions of flavor.

Six large baked clams look impressive lined up on a rectangular slate and anchored atop a bed of coarse salt. Were the clams chopped, I might be able to discern the saffron, garlic and white wine listed as ingredients, but chewing the rubbery bivalves and their equally rubbery Parmesan coating into submission saps all of my attention. 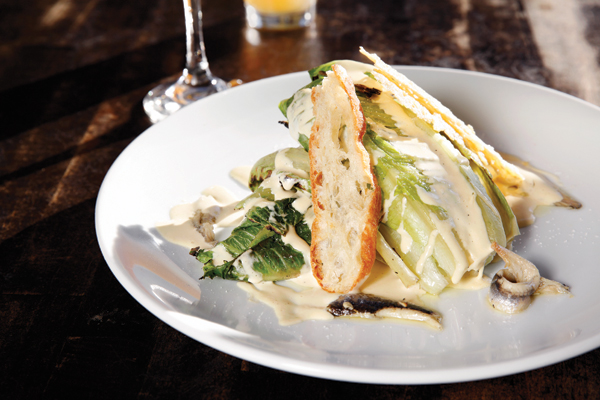 A split order of sweetbread ravioli with spaghetti squash arrives while we are still eating the first course, resulting in a desperate search for real estate on our table for two. The texture of the house-made ravioli is pleasingly al dente, but the sweetbread filling is stodgy and bitter, with all of that organ meat’s richness and subtle funkiness absent. The delicately cooked squash, swathed in a luxuriant brown butter flecked with fresh thyme, is a saving grace.

Main courses fare no better. Three neat rectangles of suckling pig look appealing, but the meat has been braised and shredded to the point where it feels like it has already been chewed.

The skin is gelatinous rather than crisp and—let’s be real—the whole reason for ordering suckling pig is the payoff of crunch and fat.

Grilled salmon is overcooked and begs for salt, as does a clump of oil-sodden kale and a mound of lumpy sweet potato purée that evokes a Thanksgiving mishap. Maybe it is just an off night.

Things are better at lunch the following week. The diminutive veal, beef and pork meatballs are light and toothsome, their basil-tomato sauce rounded, with Pecorino cheese adding just the right tang. A grilled Caesar is a good rendition of that salad, well-dressed with a creamy, full-bodied dressing and white anchovies. 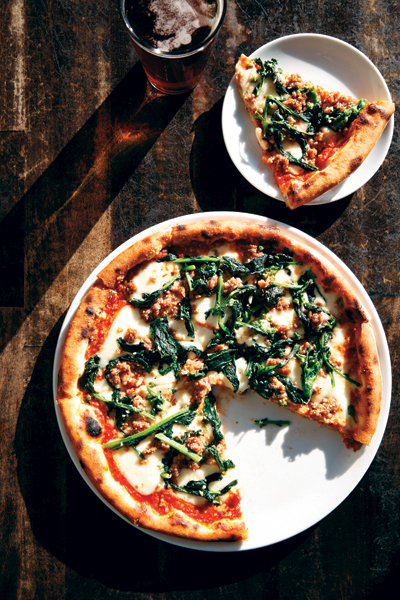 The Neapolitan-style pizzas feature thin crusts correctly blistered on the perimeter, although I can’t help noting that the Margherita would benefit from swapping out the lesser-grade cheese with fresh buffalo mozzarella. A similar upgrading would improve the Taleggio-and-mushroom pizza, which might be less aggressively salty with a better-quality pancetta.

The Lasagna Bolognese is a stack of starchy noodles with abundant tomato and meat sauce and ricotta cheese (whereas the traditional preparation features béchamel sauce and Parmesan). At a subsequent dinner, the same sauce dresses a dish advertised as Pappardelle Bolognese. Except the noodles are not pappardelle; they are tagliatelle. And the sauce isn’t Bolognese, which is a slow-cooked sauce of veal, pork and beef, made with milk, wine and only a touch of tomato. (The result is meant to be thick and adobe colored, not neon orange as Ovvio’s is.)

Other terms are similarly used fast and loose on this menu. I am always suspicious of the word wild, especially when it’s used to describe salmon and mushrooms, as it is here. The “carbonara” onions, piled atop flavorful slices of perfectly cooked hanger steak, bear little resemblance to a preparation calling for egg yolks, bacon and cheese (and maybe a touch of cream); they are flaccid strips glued together with floury white sauce. 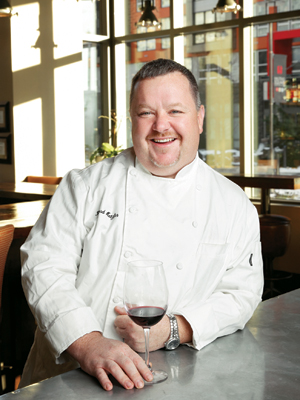 Not all the news is bad at Ovvio. A bowl of mussels, steamed in white wine and garlic, dotted with bits of pancetta, cherry-tomato confit and chunks of potato, then topped with buttery, crunchy toasted breadcrumbs, is delightful.

And when it comes time for dessert, the warm flourless chocolate cake is wonderfully bittersweet and gooey, all the better with drizzles of caramel sauce and nougat crunchies. I can also recommend the affogato of vanilla gelato, espresso and chocolate sauce, which provides a tasty jolt of postprandial energy.

What seems to be going on at Ovvio is inattention. Many dishes are partially perfect in their execution but partially a disaster. Is this mismanagement or an inherent lack of ability? I only saw Hetzler on one of my visits, and he was seated at a table in the dining room, not in the kitchen. A server one night told me “he’s never in the kitchen, except when we have a big party.”

In a phone conversation, Hetzler says he and a business partner are taking over primary ownership of the restaurant from DSF. I’m rooting for him as a proprietor to get it together.