Return of the Carillon Bells 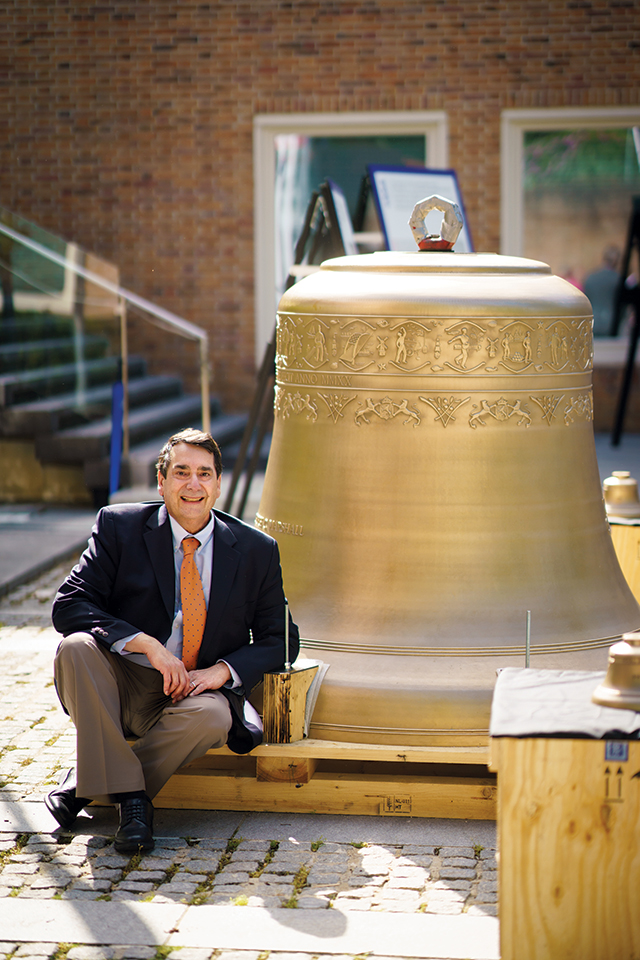 For nearly 60 years, the Netherlands Carillon bells could be heard on summer evenings at Arlington Ridge Park, home to the Marine Corps War Memorial (aka Iwo Jima memorial) near Rosslyn. Often, they pealed recognizable tunes, from “The Star-Spangled Banner” to the theme from Star Wars. And for most of those years, the man sitting atop the 127-foot bell tower was carillonneur Edward Nassor.

That is, until 2019, when the bells stopped ringing to undergo a massive, multimillion-dollar renovation project—timing that proved oddly fortuitous when the pandemic arrived and live concerts were canceled.

A carillon is a musical instrument made up of at least 23 bells arranged to produce a harmonious sound. The bells can be played manually from a keyboard (often with fists) as well as foot pedals, although these days they can also be digitally programmed. Nassor still likes to play it old school.

“It’s an Old World instrument in a New World setting,” says the musician, 64, who grew up in Springfield.

Often found in church towers, carillons rose in popularity in Holland, Belgium and northern France in the 17th century, and were a great source of civic pride. It was said that good bells and good schools were a sign of a well-run city.

In 1954 the Netherlands gifted a carillon with 49 bells to the United States as a symbol of friendship between the two nations. The bells, made mostly of bronze, were decorated with intricate reliefs depicting various facets of Dutch society, and installed on May 5, 1960—the 15th anniversary of the Netherlands’ liberation from the Nazis—in a custom-built structure near the Iwo Jima memorial, which was then new.

Nassor’s first love was the piano. He learned how to play the carillon bells while attending Virginia Commonwealth University in the late 1970s. “When I discovered that bells could be played from a keyboard, I immediately signed up for lessons,” he says.

Returning to Northern Virginia after college, he liked to venture out on summer evenings to sit on the hillside overlooking Washington, D.C., and listen to Carillon recitals amid the fireflies. He was living in Clarendon when he was introduced by a park ranger to Frank Law, then the director-carillonneur, and became Law’s protégé.

When Law died suddenly in 1985, Nassor became Arlington’s carillonneur at the young age of 27. He receives a per diem to play, but also volunteers his time for administrative tasks and advocacy. (Today, he also serves as carillonneur at the Washington National Cathedral and teaches music at Merritt Academy in Fairfax.)

He’s witnessed some poignant moments from his perch high above the Arlington skyline, at times providing a soundtrack for history. “After September 11… people came [to the park] because you could see the Pentagon from there,” he says. “[We] played a patriotic program. People were singing along, sometimes tears were coming down.”

The tower’s location is as symbolic as the bells themselves. “It’s serving the monumental corridor,” he says, noting that the carillon is on an axis with the U.S. Capitol, the Washington Monument and the Lincoln Memorial.

Nassor’s favorite tunes to play are the patriotic ones, like “America the Beautiful,” though he does take requests. “Sometimes I find notes at the bottom of the tower like, ‘Can you play the Darth Vader theme?’ So I’ll work in some Star Wars,” he says. “Occasionally, Beatles tunes. ‘Imagine’ by John Lennon does sound really good on the bells.”

After nearly six decades of use, the carillon was in need of restoration. In late 2019, all 50 bells were sent to the Netherlands for repairs while the tower itself got a face-lift. In the process, the Dutch government gifted three additional bells, elevating the structure to “grand carillon” status. The largest of the three new ones, named for former secretary of state George C. Marshall—the only U.S. general to win a Nobel Peace Prize—weighs nearly 7,600 pounds. It was hoisted into the tower in May.

The rest of the assembly is expected to be reinstalled this fall, and Nassor couldn’t be more excited. “We will be able to play a greater variety of music,” he says. “With the extra bells, it opens up new keys we can play.”

The timing feels like cosmic serendipity. Soon, the bells symbolizing liberation will be ringing once again, as vaccinations foment a return to the life we knew—the social rituals we no longer take for granted.

“The feeling to actually play at that site is awesome,” Nassor says. “When you look across at the sight line of the monuments, it’s exhilarating. And from the keyboard position, you get the most beautiful sunsets in the world.

“A lot of places, when you’re playing music, it’s a job or a gig,” he adds. “But here, when you play music, it’s an honor and a privilege.”

Matt Blitz is a journalist based in Arlington.