SER Rises Above the Flood Waters

After a spate of water incidents, the Ballston restaurant and its owners are stronger than ever. 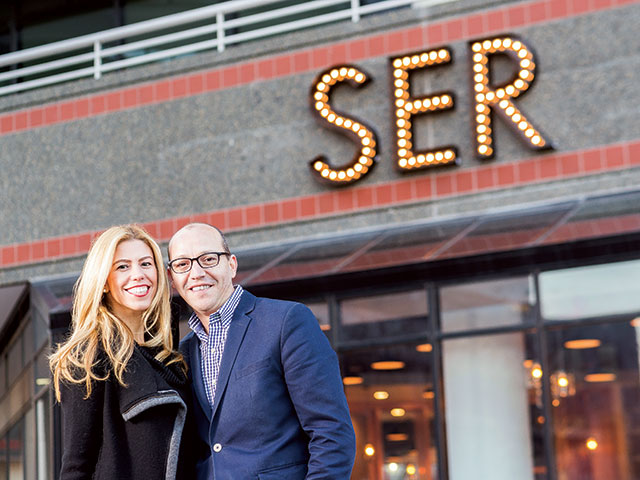 When husband-and-wife restaurateurs Javier Candon and Christiana Campos tell the story of SER, it conjures up a flood of memories—literally. Four floods have plagued their Ballston restaurant since it opened in 2015.

Candon is from Huelva, Spain, famous for its jamón Ibérico. He went to hotel school in Seville and worked for the Taberna del Alabardero restaurant chain in Spain, coming to the States in 1999 to manage its Washington outpost, where a one-year stint stretched into four. He and Campos met (at said restaurant; she and her family were regulars) in 2001, married in Seville in 2003, and now live in Arlington Forest with their children, Lucas, 13, and Luna, 9. They also own a second Spanish restaurant, Joselito Casa de Comidas, named for Javier’s father, in the District.

Christiana, what is your background?

CC: I’m first-generation American from a Brazilian family. My father was in banking, so we moved a lot. I was born in New York City, then lived in L.A., Chicago, and in Miami through high school. I went to college at American University and fell in love with D.C. and with Spain when I spent a semester there. Now I work full-time as a senior communications strategist for the National Education Association and do PR and marketing, [and] design things and music for the restaurants.

How did restaurants become a family business?

CC: After we got married, we had a dream to open a restaurant together, something that would be an extension of our own home.

JC: March will be our five-year anniversary at SER and we will throw a huge party for friends and regulars. The support of the community has been amazing.

But there have been problems, too. SER was flooded many times.

JC: Four times! Three in one year. The building had problems with the main pipe—it can’t evacuate water fast enough. The landlord had a hard time discovering what the problem was.

You started a GoFundMe page after the most recent flood in July?

JC: Yes. The last time insurance covered it, but we didn’t know if we would be covered again and we had to open. We have 40 employees and their families depending on SER. We raised $10,700. The outpouring was tremendous. We reopened on a Monday in July and we were packed; people were waiting for tables. We were speechless. From every bad situation, something good happens.

What did you use the money for?

JC: One hundred percent of it went to the staff. They were paid for their hourly wages and the loss of tips for servers and busboys. Our staff is the heartbeat of the restaurant. They make our vision come to life.

How is Joselito doing?

JC: Doing very well. Growing. Weekends are great. Brunch, too. Lunches and dinner during the week are hard, but we’ve been blown away by the accolades. We were awarded a Michelin Bib Gourmand and were in [Washington Post restaurant critic Tom Sietsema’s] Fall Dining Guide twice. This summer, Bill Gates visited. And a soccer team from Seville!

Are there more restaurants in your future?

JC: I have a lot of business plans ready, but Christiana will kill me if I open another restaurant.

CC: My goal is to live half the year in Spain and half here. We planted the seeds in the kids to study abroad—they are American and Spanish citizens.

JC: But I think she will let me open one more restaurant.

SER Has Reopened Its Doors After A Freak Pipe Explosion

This Podcast Brought to You By Two Arlington Moms