She Paved the Way for ATMs. And STEM for Girls.

Let us give thanks to Grace Hopper, the "grandmother of COBOL." 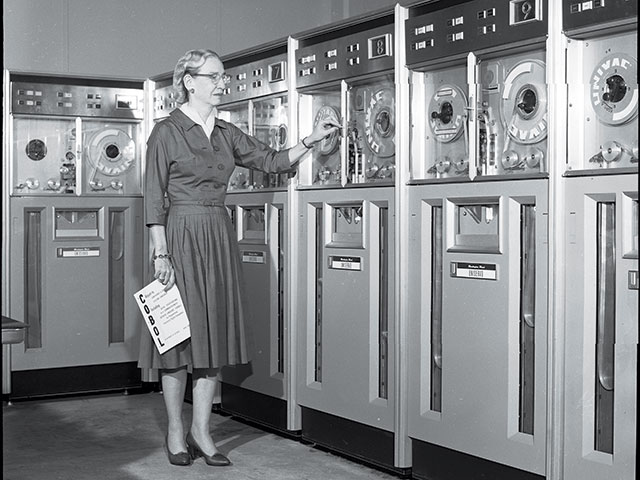 Grace Hopper in 1961. Courtesy of the Computer History Museum

Anchoring the manicured green space in front of RiverHouse Apartments is a decorative boulder bearing its name: Grace Murray Hopper Park. But chances are the many people walking dogs and playing Frisbee along this promenade near the Pentagon have no idea its namesake was one of the most groundbreaking computer scientists of the 20th century.

Born in New York City in 1906, Grace Murray showed an affinity for technology from a young age, reportedly dismantling alarm clocks she found at home to see how they ticked. After earning her doctorate in mathematics from Yale, she joined the Navy during World War II (by then she had married and divorced Vincent Foster Hopper, who died in the war in 1945) and began working on an early computer known as the MARK I, moving on to increasingly more advanced forms of computation.

By the early 1950s, Hopper was developing a programming language that used words instead of symbols—one that would become a precursor to COBOL (short for “common business-oriented language”), which debuted in 1959. She viewed COBOL like any other language—an important means of connecting human beings. “What I was after in beginning English language [programming],” she said in an oral history interview, “was to bring [in] another whole group of people able to use the computer easily…I kept calling for more user-friendly languages.”

COBOL is still widely used today, with some 220 billion lines of COBOL-based programs in banking, business and administration. Every time you swipe your ATM card, for instance, you’re relying on Grace Hopper’s influential language.

In the 1970s, Hopper was assigned to the Naval Data Automation headquarters in Washington, D.C., where she developed an information system for nuclear submarines. When she retired from the Navy as a rear admiral in 1986, she was 80 years old and then the oldest active Navy officer.

In 1991, President George H.W. Bush presented her with the National Medal of Technology, recognizing that she had “opened the door to a significantly larger universe of [computer] users.”

Residing at RiverHouse, she spent her final years consulting for Digital Equipment Corp. until her death in 1992 at the age of 85. She was buried with full military honors in Section 59 of Arlington National Cemetery.

Hopper’s legacy lives on. Last year, the U.S. Senate passed a resolution honoring her, and in October, thousands of women technologists are expected to attend the Grace Hopper Celebration, an annual computing conference, held this year in Orlando, Florida.

About her many achievements, Hopper always remained modest. “I think all I’ve got,” she once said, “is a lot of common sense and a willingness to work hard.”