Matthew Gardiner stages a sensual interpretation of the Sondheim musical. 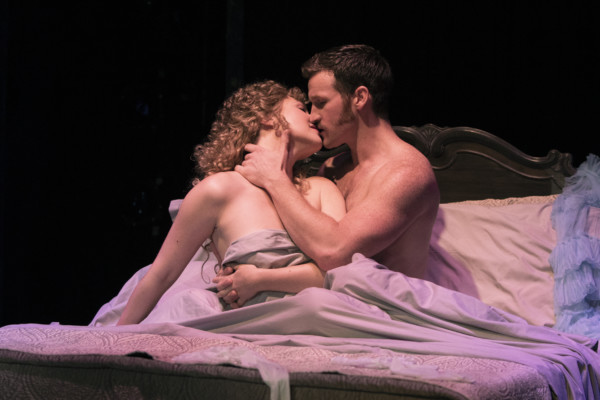 Steffanie Leigh  as Clara and Claybourne Elder as Giorgio in Passion at Signature Theatre. Photo by Christopher Mueller

Signature Theatre’s production of Passion sets the stage appropriately with a gorgeous ceiling of thousands of dried flowers. “It really gives this canopy over the whole set and implies a fever dream,” associate artistic director Matthew Gardiner says of the scenic design by Lee Savage.

Based on the story by James Lapine (which, in turn, was based on the 1981 Ettore Scola film adaptation of an 1869 Italian novel by Iginio Ugo Tarchetti), the story follows a handsome army captain, Giorgio (Claybourne Elder), who is having an affair with a woman named Clara (Steffanie Leigh), but has to leave her when he is transferred to a remote military outpost.

Upon arrival at his new station, Giorgio meets his commanding officer’s ailing cousin, Fosca (Natascia Diaz) and soon becomes the object of her obsession—a situation that imperils his career.

“It’s mysterious. It’s dark, but at the same time it is sweeping and romantic and epic,” says Gardiner, whose previous credits include Signature’s productions of Sunday in the Park with George, Crazy for You and West Side Story. 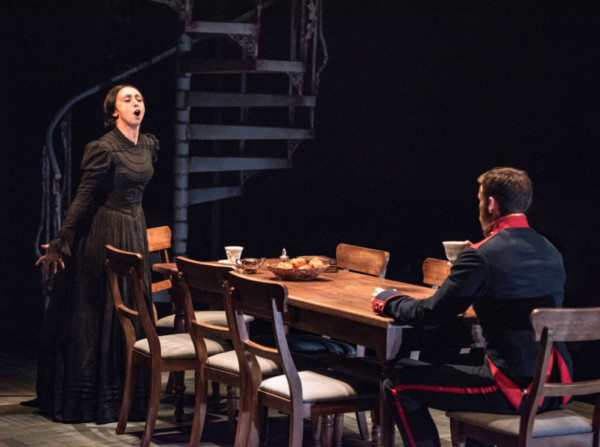 Natascia Diaz  as Fosca and Claybourne Elder as Giorgio. Photo by Margot Schulman

Rather than faithfully replicating period pieces, costume designer Robert Perdziola trades the stiff hoop skirts and uniforms of the era for more sensual, sleek silhouettes “that nod to that time period but aren’t overly historically accurate to the point of being unflattering.”

The show’s alley seating configuration—known as a “runway stage”—feels more reminiscent of a ballet than a play, and allowed lighting designer Colin Brills to set the mood with “lots of low sidelights,” Gardiner says, “very shadowy and angular.”

The shape of the stage also underscores the polarizing dynamics of the narrative, in which two women are wrenching the protagonist in opposite directions. “The main character is pulled between the world of where he is and the world he is longing to return to,” Gardiner explains. “We’re able to see his lover lounging on the bed on one side of the stage, while he’s at the dinner table, reading her love letters to him” on the other side. 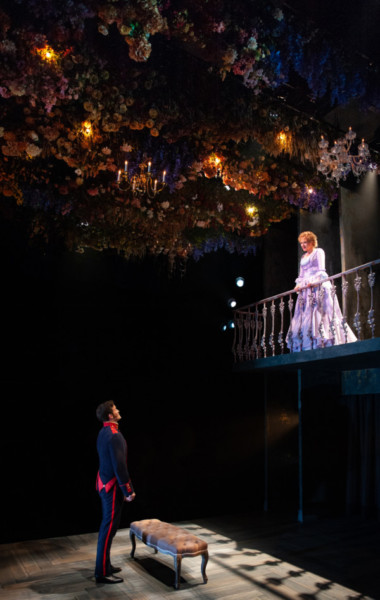 Claybourne Elder as Giorgio and Steffanie Leigh as Clara. Photo by Margot Schulman.

A hauntingly operatic musical score adds yet another dimension to the production’s themes of desire, obsession and madness. “It’s a meditation on love and all that that means,” Gardiner says. “We go to the theater to understand more about what it means to be human.”