'Passage,' an exhibit on the Arlington Arts Center lawn, explores themes of conflict, marginalization and the power dynamics of race. 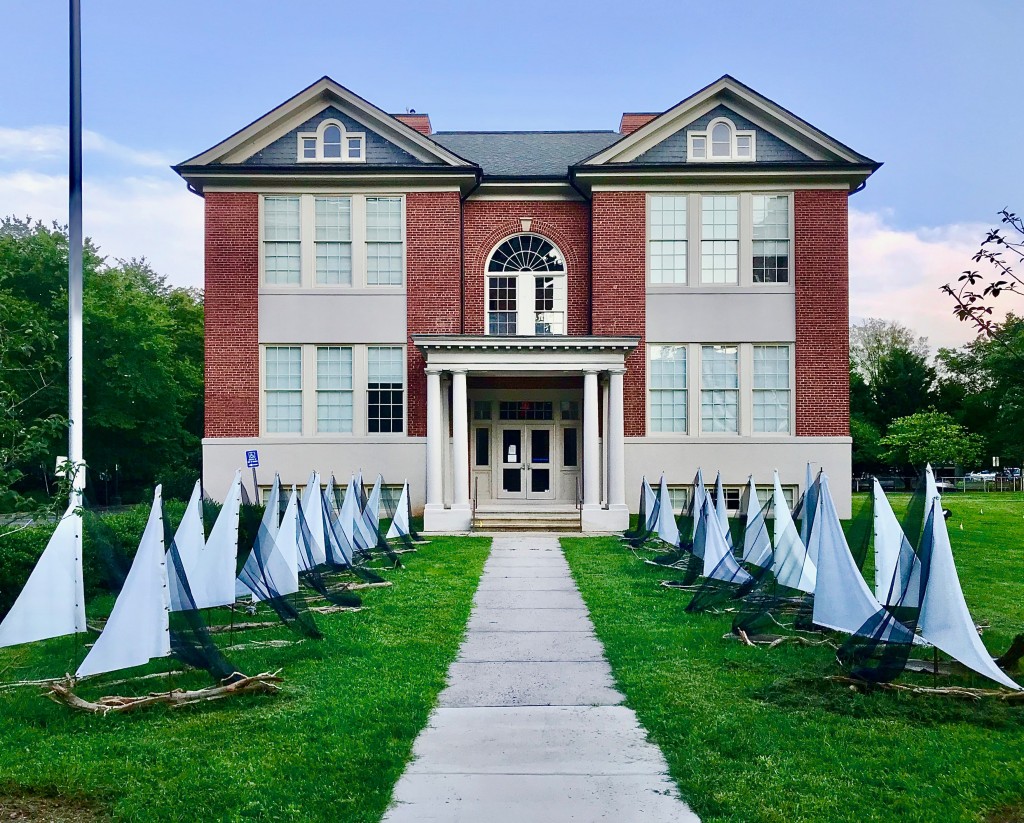 The 26 ships dotting the Arlington Arts Center lawn are evocative of the slave vessels that brought artist Lynda Andrews-Barry’s ancestors to Virginia’s shores centuries ago.

Fashioned out of driftwood foraged from the Chesapeake Bay, the sculptural works—which collectively form an exhibit called Passage—were originally slated to be installed on AAC’s grounds in April, but were delayed by Covid-19.

Instead, they arrived at their destination in late August, one day before Jacob Blake was shot and paralyzed by police in Kenosha, Wisconsin, and three months after George Floyd’s death under a police officer’s knee in Minneapolis reignited a national outcry against racial injustice. The delayed timing almost feels prescient.

That the flotilla is installed in front of AAC’s historic building in Virginia Square is not happenstance. The brick structure is a former school, which was named after Matthew Fontaine Maury, a U.S. Navy officer who would resign his post in 1861 and go on to become Secretary of the Navy of the Confederacy under Jefferson Davis. Arlington County renamed the school in honor of Maury in 1944. The grounds around the building are still known as Maury Park today.

A geographer, oceanographer and meteorologist whose achievements earned him the nicknames “Pathfinder of the Seas” and the “Father of Oceanography,” Maury was considered a pioneer. His naval navigation systems revolutionized maritime travel, significantly reducing the length of ocean voyages and allowing for more efficient trade and transport—of goods and people.

“I’m a weather fan,” says Andrews-Barry, who holds a master’s degree in exhibition design from the Corcoran College of Art + Design. “After completing my research about Mr. Maury, I connected his ocean navigational discoveries to my personal history as a descendant of those from the African diaspora.” 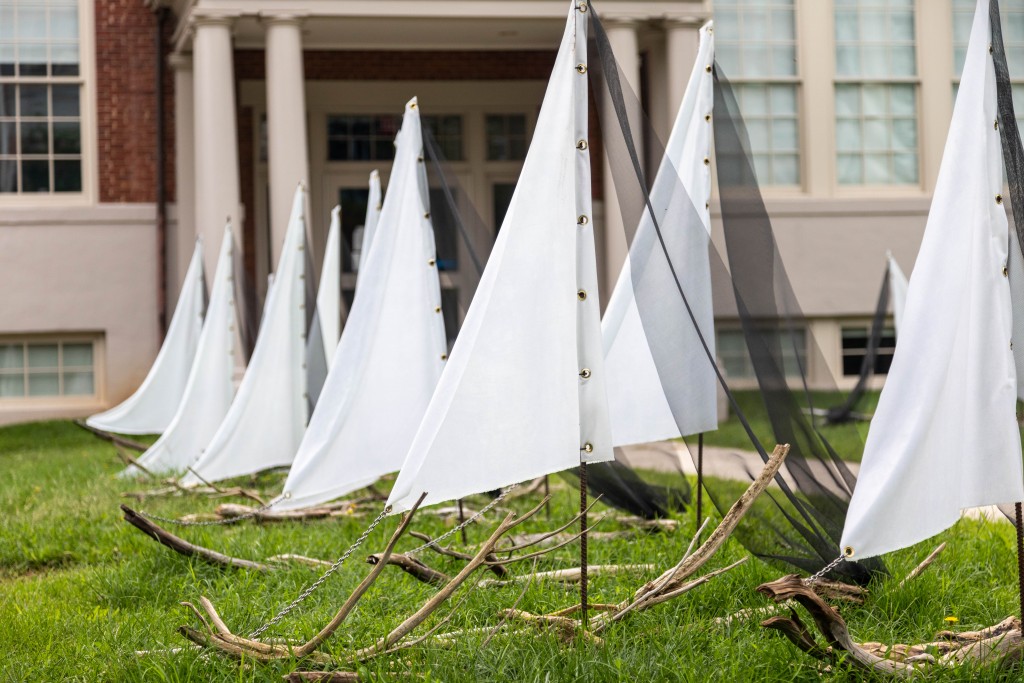 Outfitted with kinetic sails that are “subject to the whims of weather,” her sculptures are reminiscent of the seafaring vessels that transported more than 12 million kidnapped and enslaved Africans across the Atlantic between the 16th and 19th centuries.

Metaphorically, they offer a deep dive into the themes of “power dynamics, conflict, loss and marginalization,” Andrews-Barry says, including the tyranny of white supremacy, the persistence of racial inequity and the “loss of dignity, humanity, spirit, ethics and morals.”

Deterioration—insofar as this outdoor installation will be exposed to the elements for the next  four months—is another motif.

“There is an Akan ideogram called sankofa, which represents the importance of learning from the past. The deterioration happens when ‘those who cannot remember the past are condemned to repeat it,’” says the sculptor, quoting the inscription on the gates to the Dachau concentration camp in Germany, which her family visited when she was 12.

A multidisciplinary artist whose works have been featured in the National Building Museum, the National Women’s Museum and the Smithsonian’s Renwick Gallery, Andrews-Barry has a studio in Virginia’s Northumberland County (the first U.S. county, it was established by the Virginia General Assembly in 1648), at the intersection of the Potomac River and Chesapeake Bay. “I think a lot about the history of this country and how these waters played a part in its development,” she says.

Her next project, an investigation called Pearl Dream to be installed in D.C. as part of the 2021 Foggy Bottom Biennial, will commemorate The Pearl Incident of 1848, when 77 domestic slaves attempted to escape on a schooner named The Pearl. The ship was apprehended in the Potomac, about 100 miles downstream from Washington near Point Lookout, Maryland.

In some ways, the artmaking process also picks up where genealogy records have left only dead ends.

“Like most descendants of slaves, finding information about your ancestors can be difficult,” Andrews-Barry says. “There are few records because they were considered property and, in most cases, were cataloged as such without any reference to their humanity. However, I have been fortunate that my parents left me some information, which I was able to use to identify parts of my family all the way back to my fifth great-grandfather, who was awarded his freedom and owned land in Middletown, Maryland in the mid-1700s.”

The canvas sails of the ships that comprise Passage are made of phosphorescent fabric, designed to capture sunlight by day and glow in the dark at night. “Unfortunately, the surrounding LED streetlights are so bright that this component has been lost,” says the artist.

Nevertheless, she hopes the installation will be illuminating in other ways. With this work, she says, “I hope to spotlight a bit of our shared history as Americans.”

Some might be tempted to cast Maury as a complex figure, given his contributions to science.

Andrews-Barry’s take is this: “I really don’t view racists as complicated. Either you view all humans as part of the large family inhabiting the earth, or you don’t. It’s pretty simple. Although concocting racism via laws, rules, concepts, places, memes and actions must take some thought and time.”

Passage is presented by Arlington Arts Center and the Community Foundation for Northern Virginia (CFNOVA), in cooperation with Arlington Public Art, and is funded by CFNOVA’s Ross-Roberts Fund for the Arts. The installation will be on display at 3550 Wilson Boulevard through December 13. Arlington Arts Center will host a socially-distanced artist talk with Andrews-Barry on the AAC lawn on Saturday, Sept. 26 at 2 p.m.