The epic tale of how two performers from Tbilisi came to open an avant-garde theater in Arlington. 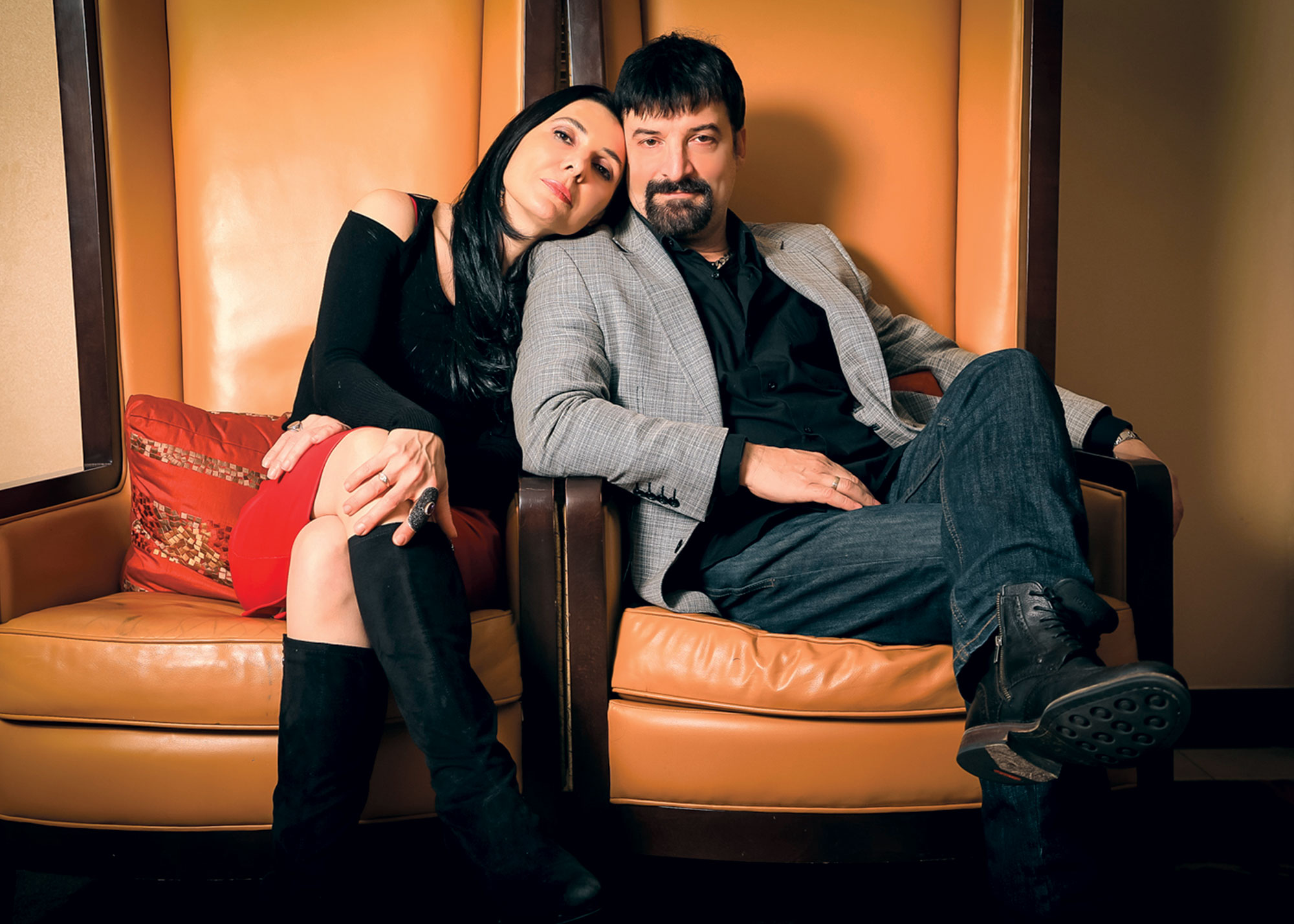 Their backstory features all the trappings of an epic drama: civil war, love, fear, separation and reunion in a foreign land. Now, after a lifetime of struggle and sacrifice, (spoiler alert) Paata and Irina Tsikurishvili have achieved something every audience can’t help rooting for—a happy ending.

Their tale begins back in 1989, when two starry-eyed performers in Soviet-ruled Tbilisi, Georgia, met at an audition and fell in love. Paata was already working as an actor at a pantomime theater when Irina, a trained ballerina, turned up one day to try out for a spot in the company. By the time Irina was 18 they were married, with the idea that they would join a theater troupe and travel the world. Then Irina got pregnant.

At the time, a proliferation of street gangs had made Tbilisi especially dangerous for men. Paata left to tour as an actor and director with a theater troupe in Germany while Irina stayed behind in a war-torn city with their baby boy, Vato. “We promised each other, One day we will go to the U.S. and we will have our own theater company,” Paata says of those early years. “But it was just a dream. We never realized it was going to happen.”

Before anything could happen, Irina needed to get out of Tbilisi. Her parents were already living in the United States, but conditions in their homeland were worsening as the Soviet Union crumbled. “We basically had no light, no electricity, no gas,” Irina recalls. “I had money because my father was sending me money [from America], but when you go to buy kerosene—that’s how we had light in the house—I couldn’t find kerosene. I couldn’t cook because we were using a little kerosene stove. My father did everything so I could get out of Georgia.”

In 1995, Irina and Vato finally made their way to the U.S., where Irina took a job teaching ballet to young gymnasts. Paata soon followed, leaving behind a budding film career in Germany. “I had to make a choice,” he says. “Work or family.” Together, they found a place to live in Maryland.

The following year, they conceived the idea for the performing arts company that would eventually become Synetic Theater, making the painful decision to send Vato (who was then 7) to live with Irina’s parents in Ohio while the young couple got their fledgling venture off the ground. In 2001, they welcomed a daughter, Ana.

Known for its “silent” (wordless) productions, Synetic isn’t like other theater companies. Paata’s sensibilities were shaped by the physical style of acting he learned in Georgia, along with his admiration for silent film stars like Charlie Chaplin and Buster Keaton. As a dancer, Irina also had a natural affinity for storytelling through movement.

They decided to use that unique perspective to differentiate Synetic (the name is a combination of “synthesis” and “kinetic”) from other theater companies, starting with a wordless production of Hamlet that won three Helen Hayes Awards in 2003.

Since then, they have staged some 70 productions, garnering more than 100 awards. The silent plays are usually based on Shakespearean works (Twelfth Night, The Tempest) or other classic tales that audiences are familiar with, such as Victor Hugo’s The Hunchback of Notre Dame or Robert Louis Stevenson’s The Strange Case of Dr. Jekyll and Mr. Hyde. 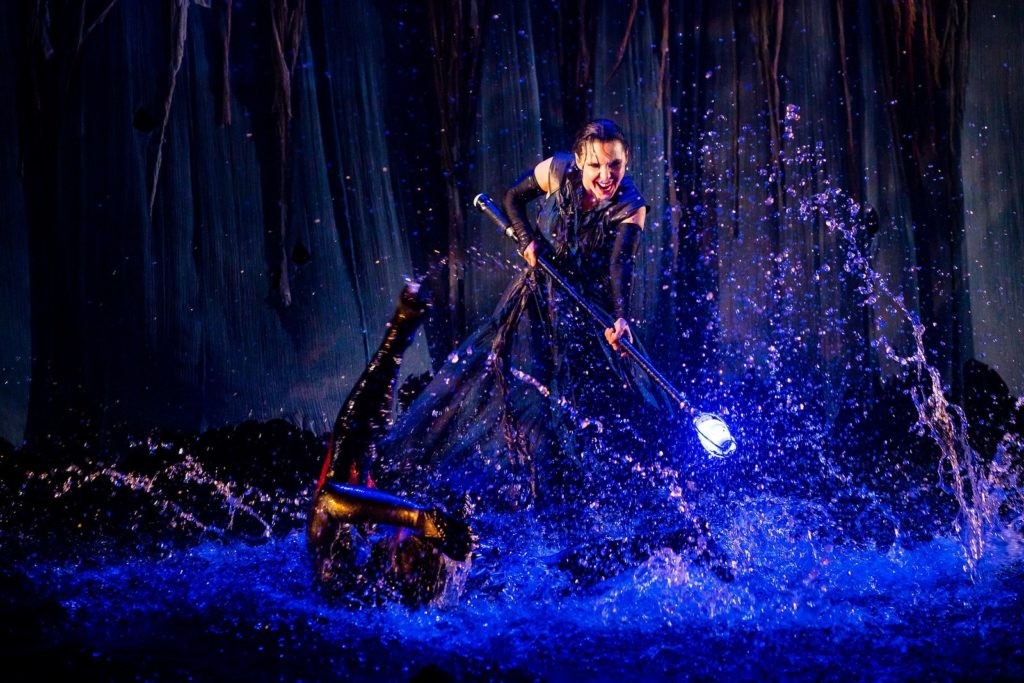 Irina Tsikurishvili as “Prospera” in a 2019 production of The Tempest

Not all of Synetic’s performances are wordless, but all have a visceral and dynamic quality, using lighting, sound, movement and costumes as narrative devices. “No matter where you take the show, it speaks to everybody in the same way,” Paata says. “It’s a universal language.”

During a silent rendition of Shakespeare’s Titus Andronicus, for example, an advancing army is portrayed as a cadre of stone-faced soldiers, their footsteps moving in unison and mimicking horseback riding. A piece of fabric effectively and beautifully represents a baby. Later on, the audience understands that the evil queen is eating her own children in a scene where the children are encased under the table at which she dines.

“Synetic is not just nonverbal theater, but it’s the synthesis of all art forms,” he says. “Even when we do text-based productions, we do it in a nontraditional way. The movement and visual storytelling are always the key. I call this the artistic melting pot.”

Looking back, he says, theater was always his destiny. He remembers, as a kid, seeing a teen production of The Bremen Town Musicians by the Brothers Grimm and knowing this was the life for him. “I was just deeply moved. It touched me and affected me. I quit piano lessons. I quit soccer. I just wanted to do theater. They had no choice but to sign me up.”

Irina’s path was more roundabout—and may have involved a little bribery. “My parents told me, ‘If you pass these ballet school exams, we’ll buy you a dog,’ ” she says, “and that’s how I got in the ballet school, not knowing that my life would be changed completely.”

Today, Synetic Theater is a family business. Paata, 51, serves as founding artistic director, with Irina, 46, in the role of founding choreographer and associate artistic director. (She’s also a force of nature onstage.) Vato, now 27, is back in Virginia and serves as assistant director. Ana, who turns 18 in October, has appeared in a handful of productions (most recently in the role of Tinkerbell in Peter Pan) and is heavily involved with the theater’s teen company. The family lives in Gainesville and works in Crystal City.

Irina jokes that she likes to tease their son about getting a “real job.” But in truth, the couple is immensely proud that both children have followed in their footsteps. “It doesn’t matter how much I tried having my children not become artists,” Irina says. “There’s no way to escape this destiny. They are both really gifted.”

“We are dreamers,” Paata adds. “And we are living our dream.”

Rina Rapuano is a D.C.-based food and travel writer. Find her on Instagram @rinacucina or Twitter @rinarap.