Long-awaited beer garden takes over a Clarendon corner with craft beer and cornhole. 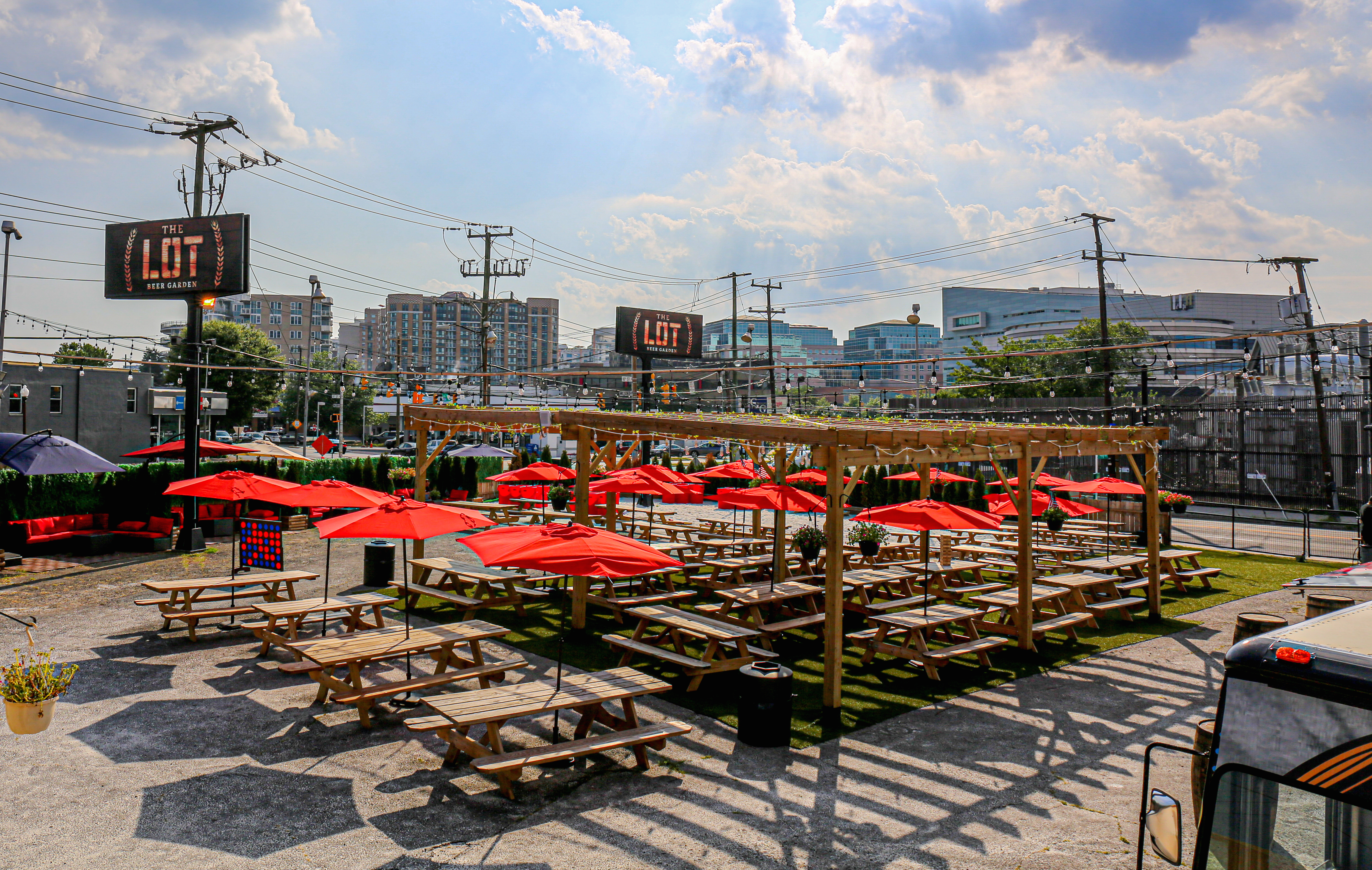 Photo courtesy of The Lot

Bob Marley’s “Buffalo Soldier” and a welcome summer breeze are wafting through the air in this colossal outdoor space on a recent weeknight. I take a sip from my plastic cup of saison and digest the scene: Entrants are carded and their hands rubber-stamped with a fuchsia smile at the sidewalk. Someone in a group of 20-somethings yells “Ohhhh!” as a giant Jenga game prepares to topple. A pair of folks in work garb divide their attention between cornhole and their cellphones.

This is The Lot, a mammoth beer garden that officially opened July 12 and has been in the works for more than two years. As the latest concept from restaurateur Mike Bramson—he also co-owns Pamplona in Clarendon, The Stand in Crystal City and the forthcoming Common Ground food hall in Rosslyn—The Lot clocks in at 22,000 square feet with capacity for more than 900 patrons.

Bramson had been looking for a sizable outdoor space for a while, he tells  Arlington Magazine via email, and seized the opportunity when Prime Motors owner Farid Khair asked to partner up on transforming Khair’s former car dealership space into a beer garden. Working with Michael Juliano of Juliano Design Build, Bramson and his wife, Christal, began hashing out designs.

“I prefer nontraditional retail spaces since it allows [for] more creativity,” Bramson says. 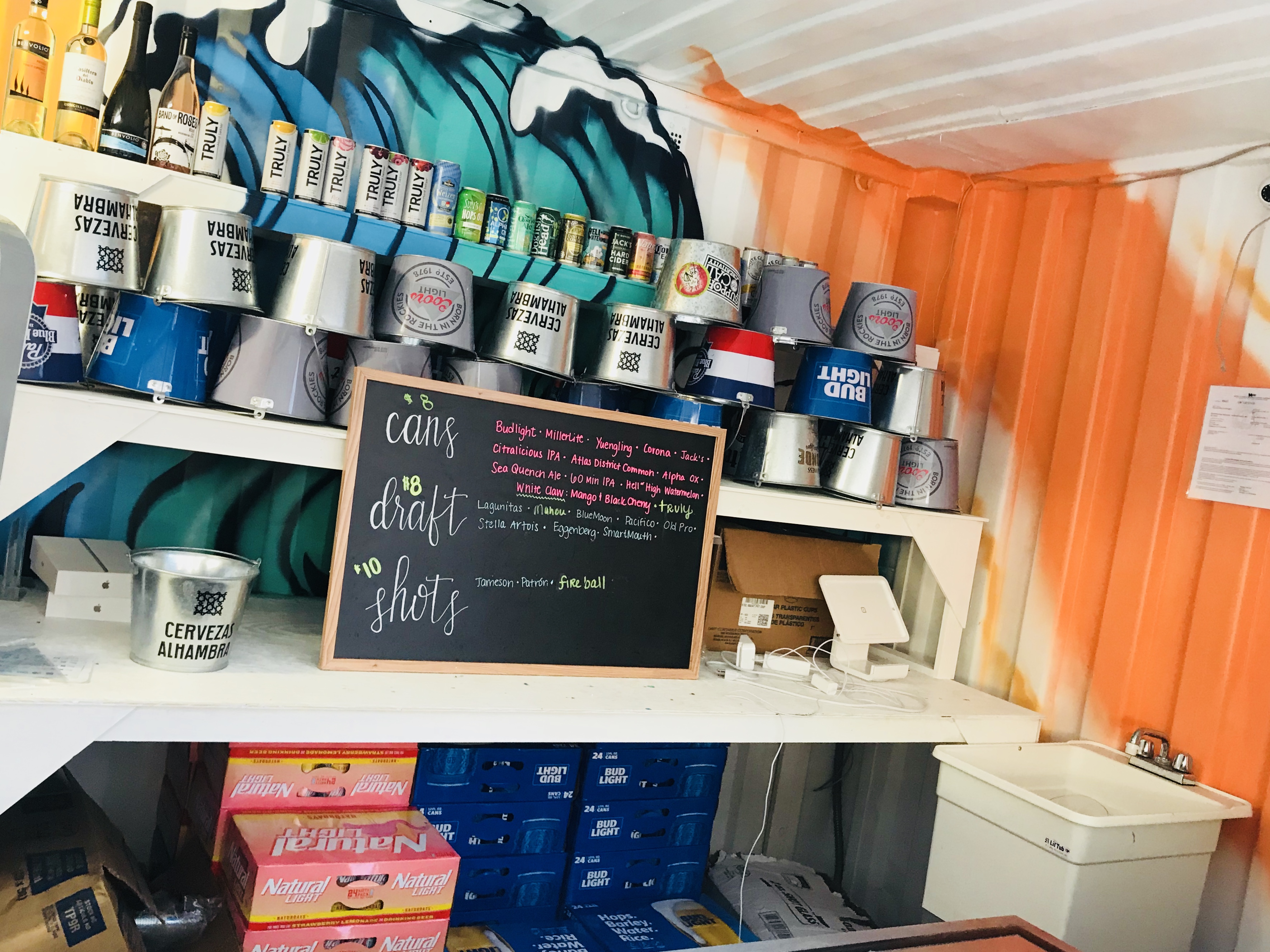 Directly across from the entrance is a container bar (as in shipping container repurposed as a watering hole) plastered with whimsical images by Leesburg muralist Rodrigo Pradel. Choose from eight draft options ($8)—including local brands such as Smartmouth and imports from Spain and Mexico—and more than a dozen cans and bottles. Beer lists will be modified at least once a month, Bramson says, with some new options each week. You can also pick up wine ($8) and cocktails ($8-$12) here or at the nearby cocktail truck, with a few trendy drinks thrown into a mix of standards. (Who doesn’t need a fresh frosé or kombucha & vodka on a summer night?)

Once you’ve got a drink in hand, pull up to a barrel-turned-table nestled in the canopied sandbox (flip-flops are a must), grab a picnic table in the center of the garden, or take a seat at one of the cushioned lounge areas adorned with faux greenery. There’s likely no escaping the heat on a scorching day, but for milder temperatures, an assortment of misters and sun umbrellas provide some respite from the sun.

A few years back, Bramson launched Arlington food truck Rebel Taco, which now has a permanent home at The Lot. (It also has a Philadelphia food-hall location and two brick-and-mortar shops planned for D.C., Bramson says.) On the menu is the Super Chick—featuring grilled chicken, pico de gallo, avocado crema and yucca—as well as carnita, barbacoa and shrimp options (all $4). A second food truck, The Tailgater, boasts a deep-fried, bacon-wrapped hot dog with truffle-ranch aioli, queso and onions. Menus for both will be updated frequently and brunch is coming within the next few weeks. 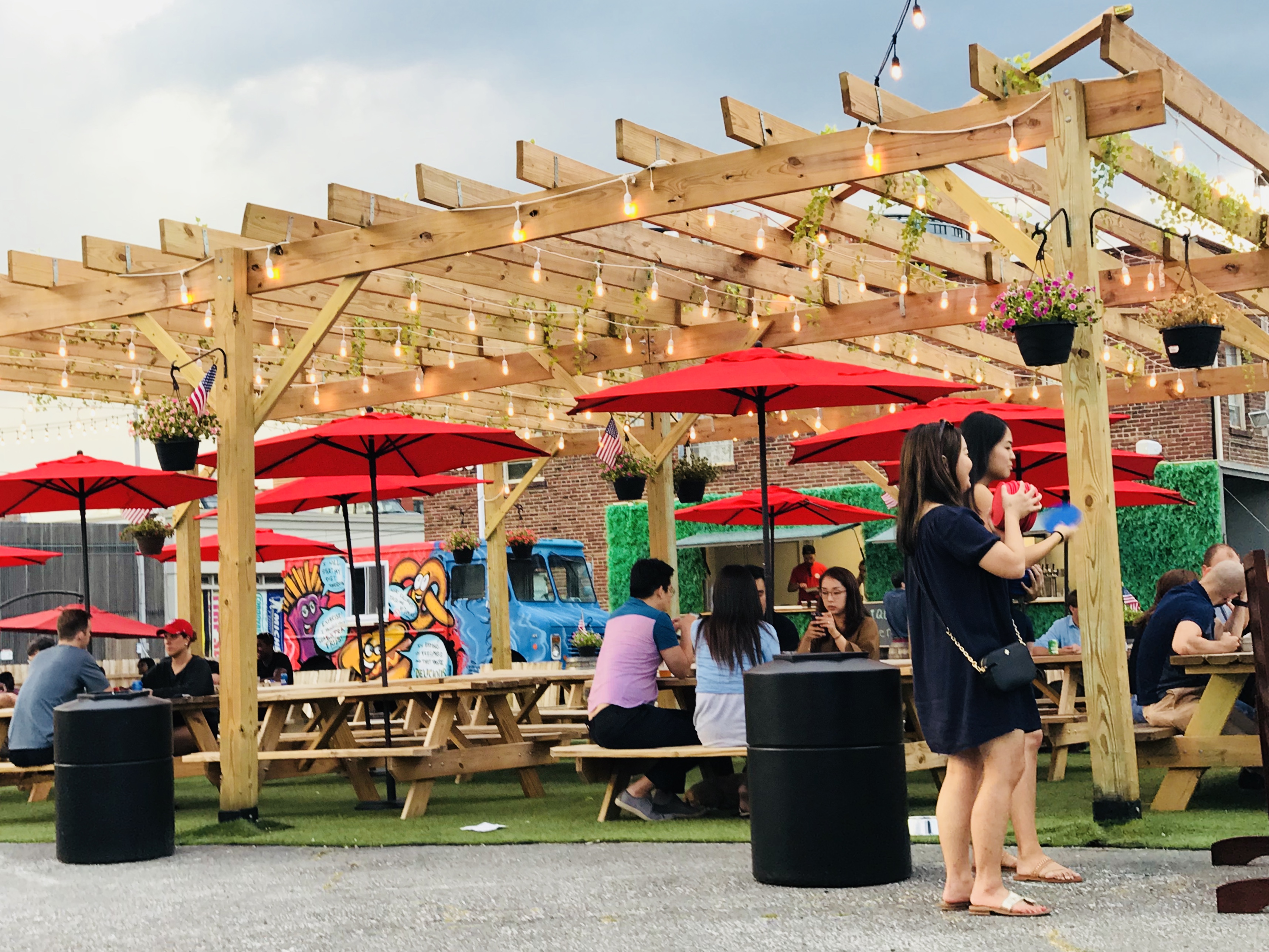 Dogs will be permitted on site during off-peak hours (though they’re barred from the sandbox) and the venue is not currently equipped to handle rainy weather. Live music starts next month. A big screen will be toted in for movie nights and football games, and an Oktoberfest event is in the offing. Bramson says the venue will remain open through the fall and, perhaps, into the early winter (with the help of outdoor heaters). And how about a beer-garden wedding? That’s a possibility, as The Lot can be rented out.

With cornhole, a human-sized game of Connect Four and affordable rail drinks just steps from the Clarendon Metro station, The Lot is surely a destination that welcomes, if not targets, local millennials. But Bramson dismisses that suggestion.

“We envision all age ranges,” he says. “There is something for everyone at The Lot.”