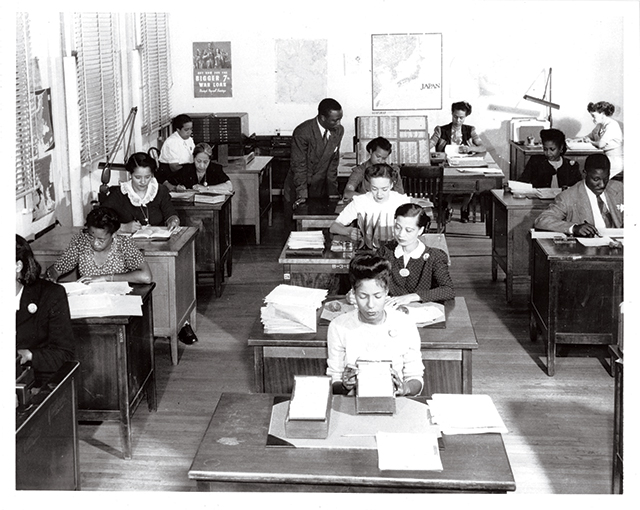 Sheryl Everett Wormley remembers her grandmother Ethel Just as an accomplished scholar and collegiate educator who broke barriers for Black women during the Jim Crow era. With a bachelor’s degree from Ohio State and a master’s from Boston University, Just became dean of women at South Carolina State University around 1950.

Those probably weren’t her only career achievements, although the others are harder to trace. During World War II, a unit of African American women secretly worked as code breakers in Arlington as part of America’s massive intelligence operation, which employed roughly 10,000 women code breakers in total. By deciphering encrypted communications, the women helped the Allied forces target Axis leaders and enemy ships—and even coordinate the D-Day invasion.

Their command center was Arlington Hall Station, a former women’s junior college that became a key wartime cryptography center. (Today it houses the George P. Shultz National Foreign Affairs Training Center at George Mason Drive and Route 50.) The station was unusual for the time in that up to 15% of its workforce was Black—an effort at equity that Eleanor Roosevelt may have dictated herself, according to author Liza Mundy’s book, Code Girls: The Untold Story of the American Women Code Breakers of World War II.

But between the top-secret nature of the work and the racial segregation of the period, even people working at Arlington Hall were unaware that Just’s special unit existed. Whereas stories of their white counterparts have come to light as records have been declassified, the identities of most of Arlington’s Black code breakers remain unknown.

In researching her book, Mundy scoured National Security Agency records, among many other sources, and uncovered only two names of Arlington’s Black women code breakers: Annie Briggs, who headed up the production unit, which worked to identify and decipher codes; and Ethel Just, who led a team of translators.

William Coffee, a Black man, supervised the women and recruited many of them, later winning an award for his wartime leadership.

Genealogical and newspaper archives suggest that the Ethel Just of Arlington Hall was likely Ethel Highwarden Just, a Howard University language professor who married pioneering Black biologist Ernest Everett Just. The couple lived in Washington, D.C., and had three children before they divorced around 1939.

Although definitive proof of Just’s role in the code breaking unit is elusive, the October 1956 edition of The Negro History Bulletin (a periodical launched in 1937 by African American historian Carter G. Woodson) states that Ethel Just worked as a “translator in the War Department.”

“William Coffee may have known people who attended or taught at Howard,” Mundy says. “It wouldn’t surprise me at all if the country’s historically Black colleges and universities contributed many members of the code breaking unit.”

She Believed Black History Could Be Taught Better
She Paved the Way for ATMs. And STEM for Girls.
War and the Roses