The Bridges of Washington County

In Maryland’s Washington County, a historic stone arch bridge can suddenly appear around any bend in the road. Thirty were built between 1819 and the end of the Civil War in this narrow neck of a county, sandwiched between Pennsylvania and West Virginia, along roads that connected eastern cities such as Baltimore with the western frontier beyond the Appalachian Mountains.

Today, Washington County contains more of these beauties than any other place in the mid-Atlantic. Even better, searching for them leads the traveler on a scavenger hunt through the rolling countryside, with Civil War battlefields, biking trails and swiftly flowing streams perfect for kayaking encountered along the way.

Detectives hot on the trail of the limestone-and-granite structures will wind through century-old towns and past barns that lean to one side in their old age, shedding red paint into rocky pastures. Traveling roads that swoop up and down like roller coasters, bridge hunters may find that on this trip, the journey is just as enjoyable as the destination. 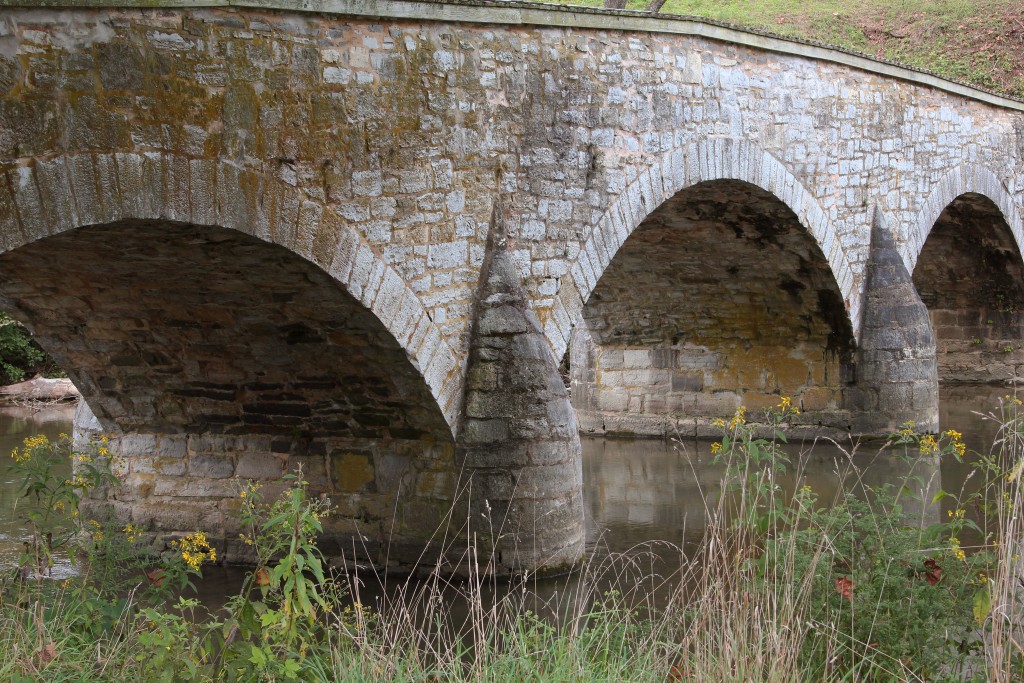 Washington County boasts the most famous stone arch bridge in the United States, which played a key role in the Civil War’s Battle of Antietam. To this day, Sept. 17, 1862, remains the single bloodiest day of battle in American history, with more than 23,000 casualties. According to a Union private, “In a second the air was full of the hiss of bullets…the whole landscape for an instant turned slightly red.”

That morning, Union Gen. Ambrose Burnside received orders from Maj. Gen. George B. McClellan “to carry the bridge, then to gain possession of the heights beyond.” The bridge in question, then known as Rohrbach’s Bridge, had been built in 1836 across Antietam Creek. But its 12-foot width quickly turned into a deadly bottleneck for the soldiers attempting to cross it, and some 500 Georgians were able to hold off the Union army for three hours—hours that some historians say may have altered the outcome of the battle. Whether or not the event changed history, it did succeed in permanently changing the bridge’s name.

Today, the Burnside Bridge stands on Antietam National Battlefield and is open only to pedestrians. The far end of the bridge is shaded by a towering sycamore tree that somehow survived the battle unharmed. The tree appears as a sapling in photos of the battlefield taken by famed photographer Alexander Gardner, and it continues to grow, 150 years later. 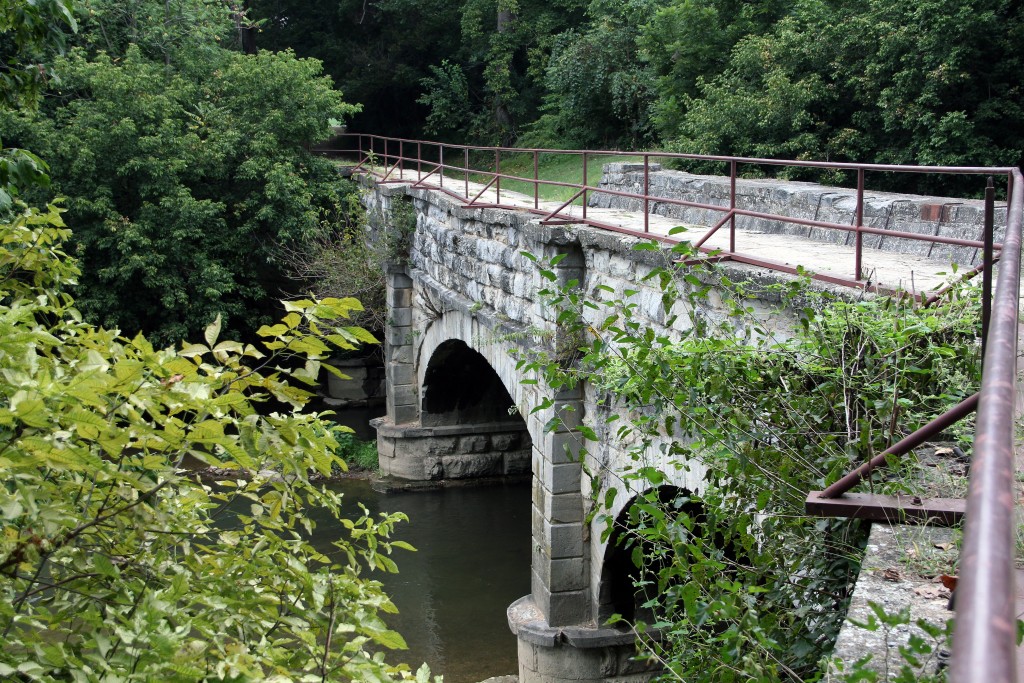 An aqueduct is simply a bridge built to carry water, and the Antietam Aqueduct—the fourth of 11 aqueducts built by the Chesapeake and Ohio Canal Company—was constructed in 1834 to carry the C&O Canal over Antietam Creek. Its high stone walls once sloshed with water, floating canal boats filled with crops, lumber and coal, but the top of the aqueduct is now a dry path marking milepost 69.4 of the 184.5-mile trail in the C&O Canal National Historic Park.

With a parking lot and campground just a few feet down the road, the Antietam Aqueduct makes a convenient place to start a hike or bike ride along the canal path. Oddly enough, it can be hard to spot the aqueduct itself while crossing over it. For a better view of its three stone arches, scramble down the steep path on the aqueduct’s right side to the small beach below. 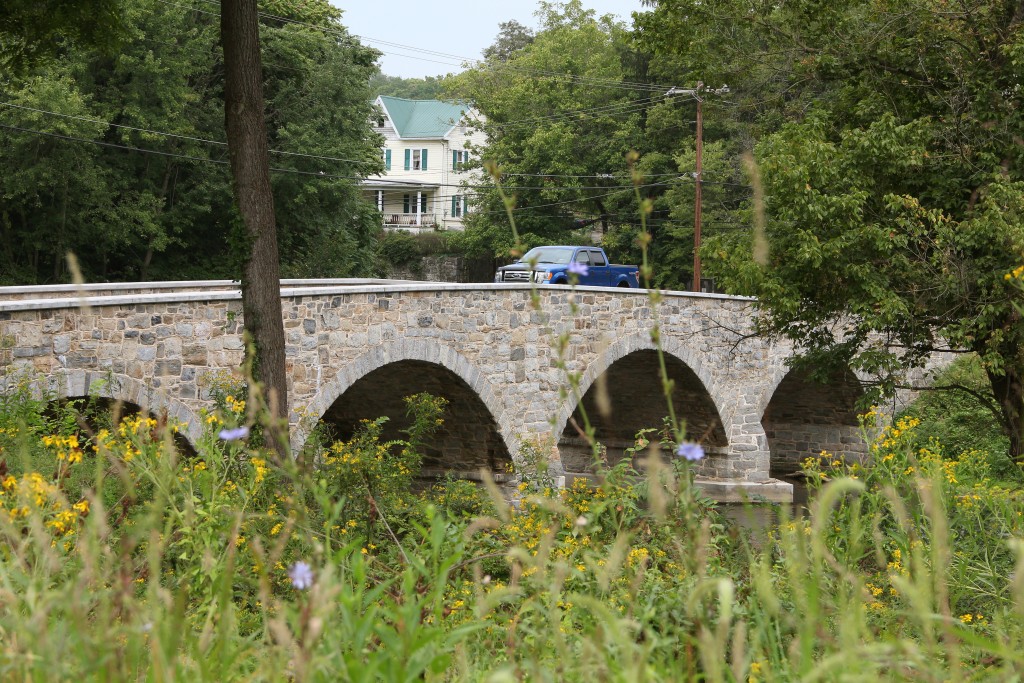 Unlike most of Washington County’s other bridges, the Antietam Iron Works Bridge traces its name back to the American Revolution. Built in 1832, this one-lane bridge sits a few feet from the ruins of the Frederick Forge, later renamed the Antietam Iron Works, which produced cannons and ammunition for the Revolutionary War. (George Washington himself wrote a letter to the Board of War Headquarters, requesting more cannons from the forge for the war effort.)

The only four-arch bridge spanning Antietam Creek, it sits just a quarter mile from the Antietam Aqueduct on a bend of the winding Harpers Ferry Road. Although the bridge is still open to traffic, visitors can pull over to the grassy verge for a good view of the arches, two historical markers and the rushing creek below. 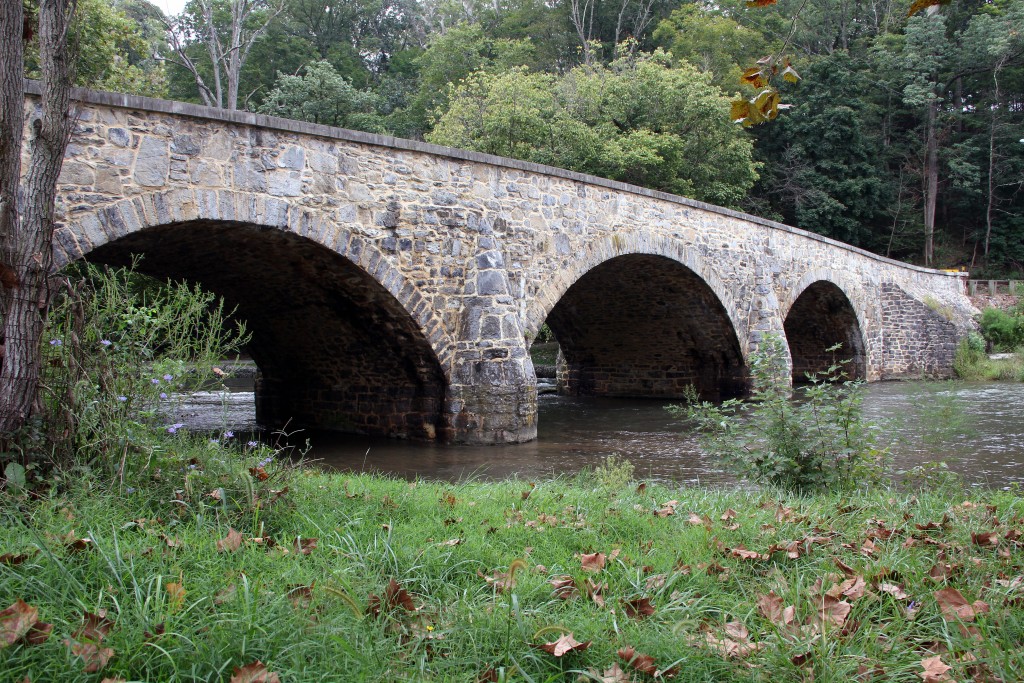 A wooden bridge once occupied the site of Booth’s Mill Bridge on Route 68. But heavy traffic soon wore out the state’s wooden spans, prompting Maryland to begin replacing them with stone structures made of limestone and granite from local quarries. In the 1920s, a surveyor for Washington County named Elmer E. Piper wrote, “Keep these bridges in proper repair and they will last as long as any. They have stood many hard knocks for a long time.”

Piper was right. The Booth’s Mill Bridge, built by Charles Wilson in 1833 for the sum of $2,700, has stood the tests of both time and many wheels. More than 175 years later, the bridge is still carrying cars across Antietam Creek. Today, it’s located in Devil’s Backbone County Park, a handy place to park and take a close-up look at the bridge’s construction. The bridge is named for the Rev. Bartholomew Booth, who built a mill nearby and founded a school that taught the sons of the gentry fencing and dancing, among other pursuits. His pupils included the sons of Benedict Arnold as well as Bushrod Washington, George Washington’s nephew. 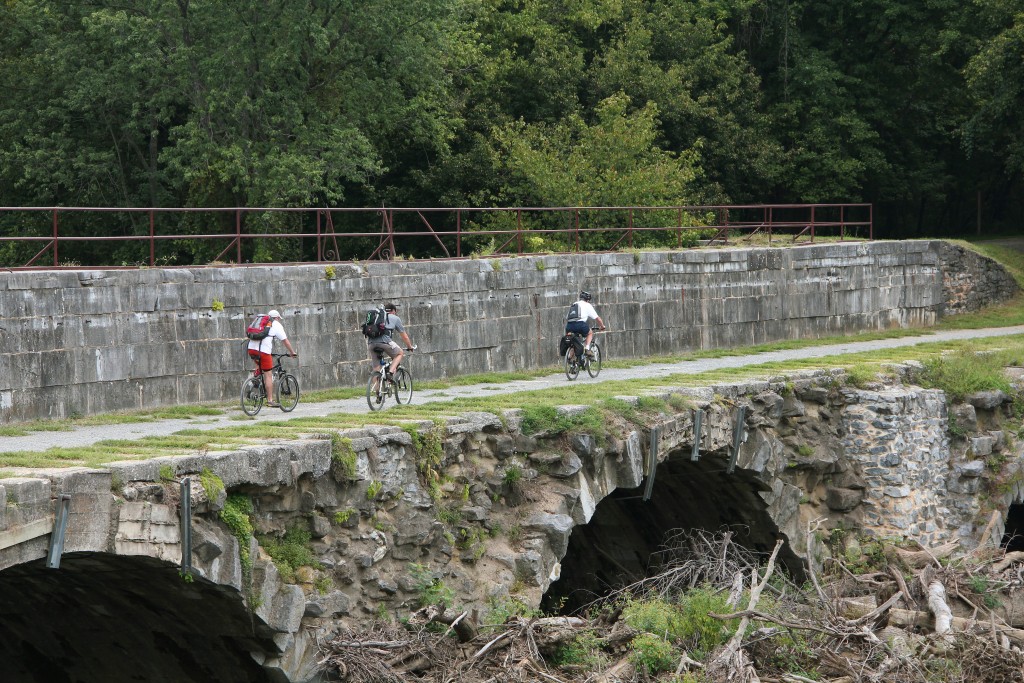 Witnesses to the spectacular accident at the Conococheague Aqueduct never agreed on its cause. Some blamed the Confederates, who shelled the structure in 1863 with the aim of stopping the Union Army’s coal supply from traveling down the canal to Georgetown. Some said that on April 20, 1920, Capt. Frank Myers was in a hurry when he steered his boat into the aqueduct; others said he’d been drinking. But everyone agrees that when his boat bumped the upstream parapet that day, the wall gave way, carrying the boat with it into the creek below.

The fact that Myers leapt to safety is especially impressive when pondered from the path atop the aqueduct, which rises some 30 feet above the water’s surface. Visitors might also ponder how to pronounce the word “Conococheague” (KAH´-no-KAH´-cheeg), an Algonquin name that means “a long way.”

Now part of the C&O Canal’s Williamsport Visitors Center, the aqueduct still retains the stone wall on its downstream side. Park rangers offer guided hikes and rides on canal boats, and the visitors center features several history exhibits. With downtown Williamsport only a few blocks away, a visit to the aqueduct can easily be combined with a break for lunch in the historic town—one that George Washington once contemplated as a location for the nation’s capital. 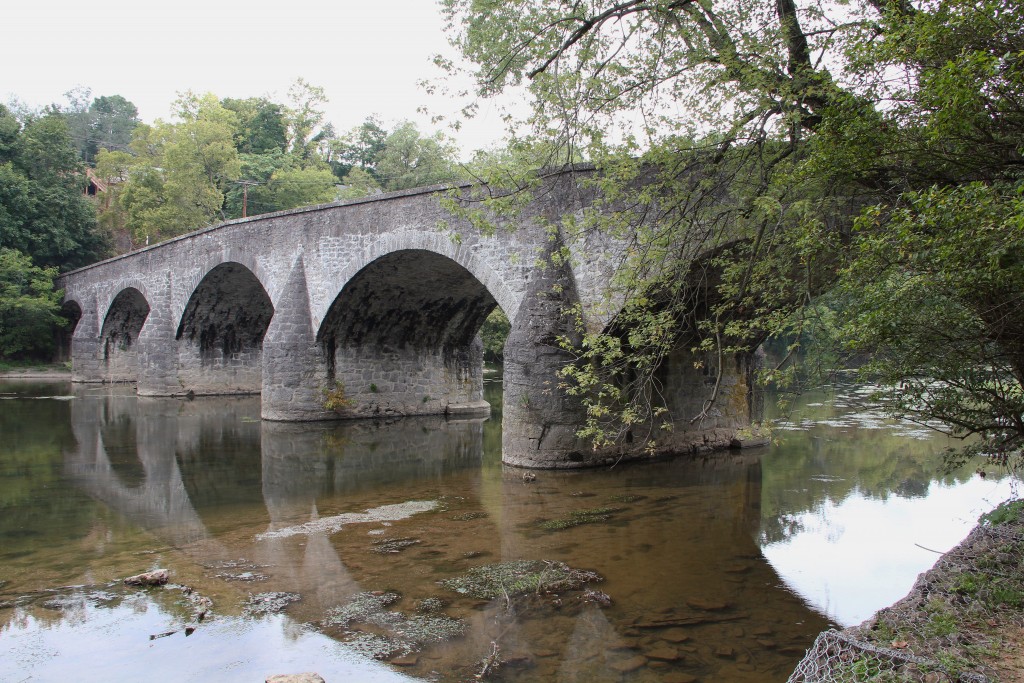 Built in 1819, Washington County’s oldest stone bridge is also its longest, stretching 210 feet over Conococheague Creek with five arches. Wilson’s Bridge was once part of Route 40, the National Pike, and helped connect cities in the east with frontier settlements in the west. The highway was re-routed in 1935, but traffic kept rumbling over Wilson Bridge until June 1972, when floodwaters from Hurricane Agnes completely covered the structure, sweeping away many of its stones. County residents and historical societies saved the bridge from demolition, and it was restored in 1984.

Today, the bridge is open only to pedestrians and is easy to reach from the Wilson’s Bridge picnic area. The creek’s banks are an excellent spot to cast for smallmouth bass, rock bass and bluegill.

Antietam National Battlefield, where this tour starts, is approximately 70 miles from Washington, D.C. The towns of Hagerstown, Md., Boonsboro, Md., and Shepherdstown, W.Va., all offer lodging and make convenient bases for exploring the bridges. A “Bridges of Washington County” brochure, which includes a map, is available from the Hagerstown-Washington County Convention and Visitors Bureau, online at bridges.marylandmemories.org.

To tour the bridges in the order listed, begin by taking the Beltway to I-270 North and merge onto I-70 West; then take Exit 29 to Route 65 South toward Sharpsburg. Travel about 10 miles south to the Antietam National Battlefield Visitor Center and pick up a park map, which will guide you to the Burnside Bridge. Follow the battlefield tour past stop #10, then turn left onto Harpers Ferry Road and drive approximately three miles. Turn right on Canal Road, drive approximately one block to a brown metal gate on the left. Park and then walk through the gate; the Antietam Aqueduct is approximately one block down the path. Take Canal Road back to Harpers Ferry Road and turn right; you will drive over the one-lane Antietam Iron Works Bridge in 0.2 miles. Drive back toward the battlefield on Harpers Ferry Road. Turn right on East Main St./MD-34, then take the first left onto North Church Street, which becomes MD-65. Drive 6.6 miles and turn right onto Lappans Road/MD-68. Drive 1.7 miles; Devil’s Backbone County Park and the Booth’s Mill Bridge will be on your left. From the park, turn right on Lappans Road/MD-68, follow it for 7.7 miles and turn left on U.S. Route 11/West Potomac Street. Follow Potomac Street to the Williamsport C&O Canal Visitors Center a few blocks away, site of the Conococheague Aqueduct. Retrace your path back down Potomac Street and turn left on MD-63. Drive 3.7 miles and turn left on U.S. Route 40. In approximately 2.5 miles, turn right at the sign for the Hagers-town Speedway, and the Wilson’s Bridge picnic area is just ahead.

Stoney Creek Farm (19223 Manor Church Road, Boonsboro, Md., 301-432-6272, www.stoneycreekfarm.com) offers a house built in the late 1700s, extensive grounds for wandering and some resident horses that enjoy having their noses stroked. Four rooms. Rates: $210-$265; includes a full breakfast and wine, cheese and sweets in the afternoon.

Desert Rose Café (42 North Conococheague St., Williamsport, Md., 301-223-6400) is a friendly spot two blocks from the C&O Canal, well-known with hikers for its homey breakfast sandwiches and many vegetarian or vegan soups and sandwiches.
The Press Room (129 West German St., Shepherdstown, W.Va., 304-876-8777) is a local favorite, with booths and exposed-brick walls. Serves Sunday brunch and dinner; specializes in Italian dishes and seafood, with a popular bar.

Antietam National Battlefield: Burnside Bridge is just one stop on the 8.5-mile auto tour of one of the pivotal battles of the Civil War. Stop by the visitors center to view museum exhibits, watch a film, pick up maps, and find out about hikes and talks led by park rangers.

C&O Canal National Historic Park: Accessible from the Antietam Aqueduct and the Conococheague Aqueduct, the park’s centerpiece is a 184.5-mile gravel trail that stretches from Washington, D.C., to Cumberland, Md., and is popular with both hikers and bikers.

Devil’s Backbone County Park: The site of Booth’s Mill Bridge, this park offers a nature trail, footbridge, fishing, a playground, grills and picnic tables. Canoes and kayaks can be rented across the street at Antietam Creek Canoe (240-447-0444, www.an
tietamcreek.com).

Laurie McClellan is a writer and photographer who lives in Arlington and enjoys roaming the countryside in search of nature.