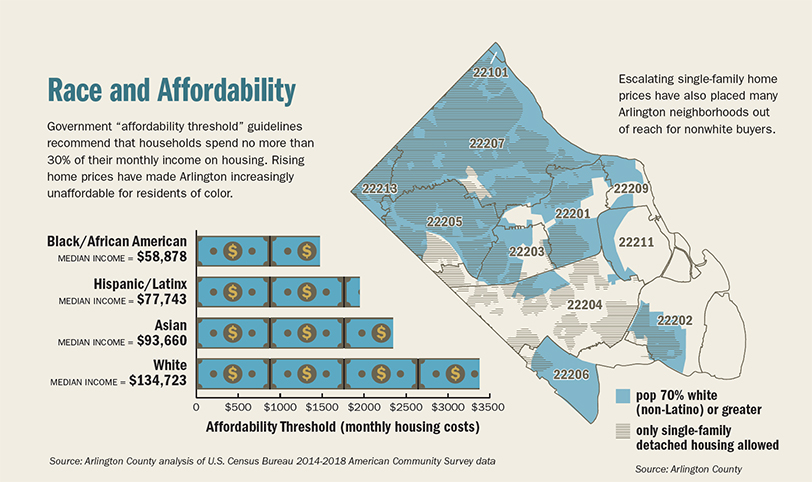 After looking at assessed values for new-home construction and doing the math, Huntley projected that new duplexes would end up being priced affordably (i.e., with a sale price of $525,000 or less for buyers making the area median income of $117,000) in only six Arlington neighborhoods: Arlington View, Claremont, Columbia Forest, Fairlington, Green Valley and Shirlington.

“The market does not seem to generate units at the price points that advocates are looking for,” says Huntley, who published his research online and serves as a consultant to Arlingtonians for our Sustainable Future, a local group that is concerned about the effects of rapid urbanization. “The numbers I came up with are minimum values. In reality, they might sell for higher.”

County planners are familiar with the obstacles, but say this is the time to talk about all the options. “If you don’t have a conversation about possibly allowing other housing types, you’ll never get to the conversation about who can afford them,” says Richard Tucker, Housing Arlington coordinator with Arlington County.

The question of affordability “has hit a nerve for people,” says Winters of the Alliance for Housing Solutions. She stresses that there is a distinction between what she calls “big ‘A’ affordable” housing, which is restricted to people making a certain percentage of the area median income, and “small ‘a’ affordable” housing, which is simply priced at a level that middle-income homebuyers believe they can afford.

“Some people think that if something’s not capital ‘A’ affordable, we shouldn’t do it at all,” she says. “But that’s not how we are viewing the missing middle. We view it as a way to set the housing market back on the right track.”
To some, the answer to Arlington’s housing problem seems obvious: Build more housing, perhaps loosen some rules and let the market push prices down.

“In super-constrained areas, everything gets more expensive over time,” says Hamilton of George Mason University’s Urbanity Project. “One thing that Arlington stands out as having done really well is planning around transit and allowing lots of multifamily development” along the Metro corridors. “Transit-oriented development has helped the D.C. region stay more affordable than areas like the [San Francisco] Bay Area, New York and Boston, where new housing supply has not been allowed to respond to the demand.”

But it may not be enough, given growth projections that have Arlington’s population surpassing 301,000 by 2045. “The corridors have delivered everything we want, but the region as a whole has underperformed,” says county board member Karantonis. “We are chronically supply-starved in terms of housing.”

Others disagree. “Arlington has been going full bore, adding housing supply for the last 20 years,” says Peter Rousselot, a retired lawyer and member of the leadership team at Arlingtonians for our Sustainable Future (ASF), which has expressed opposition to the county’s missing middle study.

In lieu of density changes it fears would only accelerate population growth, ASF is imploring county officials to reconsider zoning that currently allows extremely large single-family homes on small lots (a significant contributor to price hikes, as well as mature tree loss).

The group also supports the idea of housing vouchers or housing co-ops for county employees, and proposes the establishment of community land trusts to preserve green space. It favors a greater focus on remodeling existing buildings for adaptive reuse as an alternative to teardowns.

“Arlington has done more than its regional fair share to provide housing, and given the cost of schools and other infrastructure, we don’t have the resources to keep doing that,” says Rousselot, who moved to Arlington in 1997 and has long been outspoken on county, school and political issues.

Another ASF concern is that continued urbanization—at the expense of parks and green spaces—will create even more impermeable paved surfaces, leading to more water runoff and increasing the risk of flooding. Rousselot points to flash floods in 2018 and 2019 that resulted in nearly $6 million in damages to county property and millions more to area homes and businesses.

He would like to see the county adopt more long-term planning tools that allow for quantitative and transparent analysis of new development proposals.

“There certainly has been and continues to be a housing affordability issue in Arlington,” Rousselot says, “but adding the so-called missing middle is not going to solve it.”

Some worry that Arlington may already have missed its window of opportunity to fend off a middle-class diaspora. “By the time we finish studying the issue and doing what we’re doing to do, what property is going to be affordable to buy with Amazon coming in?” asks Green Valley Civic Association president Clark.

“The county’s effort is laudable, but one might point out that it’s too little, too late,” agrees Matt Bakker, an associate professor of sociology at Marymount University, where he is studying historically Black neighborhoods. “Arlington has seen a fundamental transformation in the past two decades.”

“The suggestion is that there is too much government regulation [of housing] and builders and developers can solve the problem we’ve created [with smaller market-rate homes],” he says. “It’s naive to see these actors as saviors for the communities who have been historically excluded from the housing market and now experience a real racial wealth gap as a result of discriminatory practices.”

Where to Catch the Brightest Holiday Light Displays in the Area