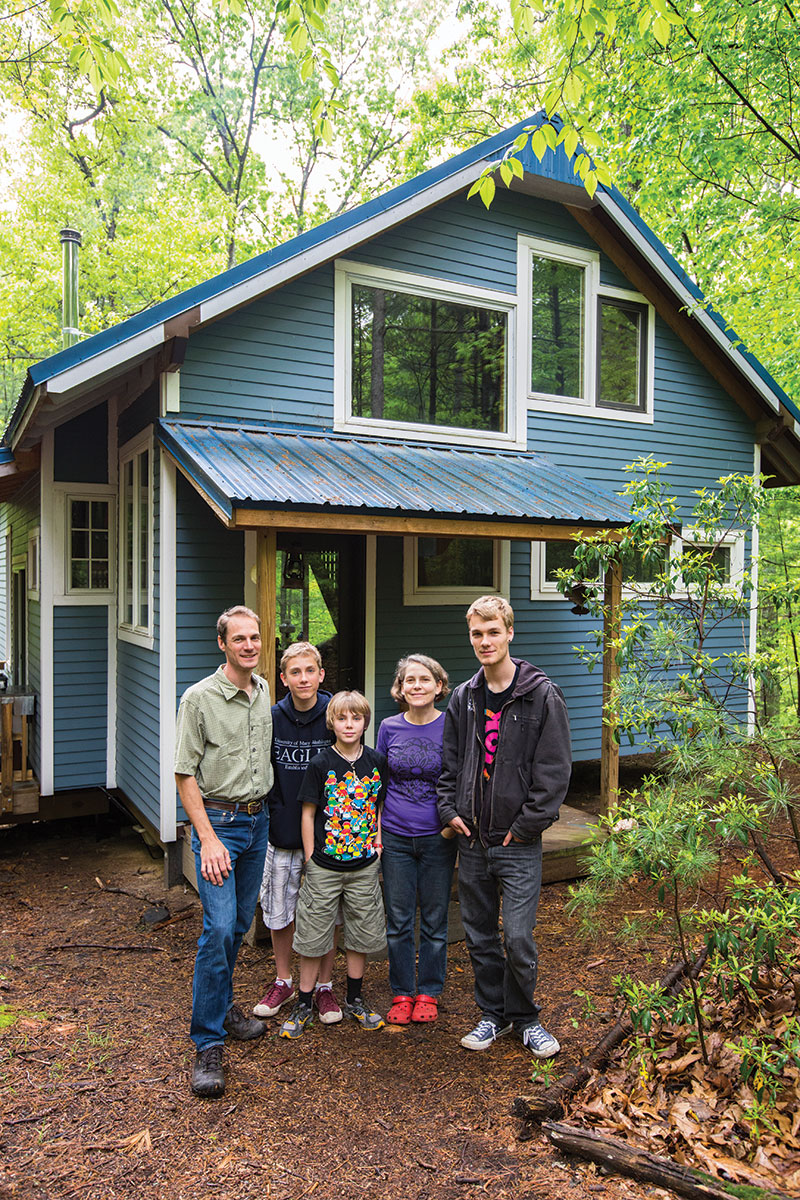 Hans Bauman and Marit Simenson with their kids, Tor, Lenka and Penn

In 1879, a French postman started gathering stones as he walked his route. He’d tuck them into his jacket, and soon he had a pile. Eventually he needed a basket, then a wheelbarrow. After 33 years, Ferdinand Cheval had a palace—Le Palais Idéal—built with rocks that everyone else had ignored and only he had valued.

Hans Bauman can relate. Although instead of using stones, the Arlington native is partial to discarded siding, windows and metal railings.

In 2004, Bauman decided to buy a piece of land on a whim. He had returned to his hometown after years in San Francisco’s tech industry and was working as the director of technology for a D.C.-based environmental nonprofit. He liked the idea of a remote retreat in the woods where he and his family could spend summer weekends. He settled on a few acres, more than an hour’s drive from Arlington, off a nearly impassible road in the Blue Ridge Mountains.

It was the right place for a cabin, he thought, one that he could build himself in his spare time. After all, he’d once interned with an architecture firm and had worked construction in high school and college, so he was handy. He had even put an addition on the home he shares with his wife, Marit Simenson, and their children, Penn (16), Tor (14), and Lenka (10) in Arlington’s Waycroft-Woodlawn neighborhood. But he needed building materials. 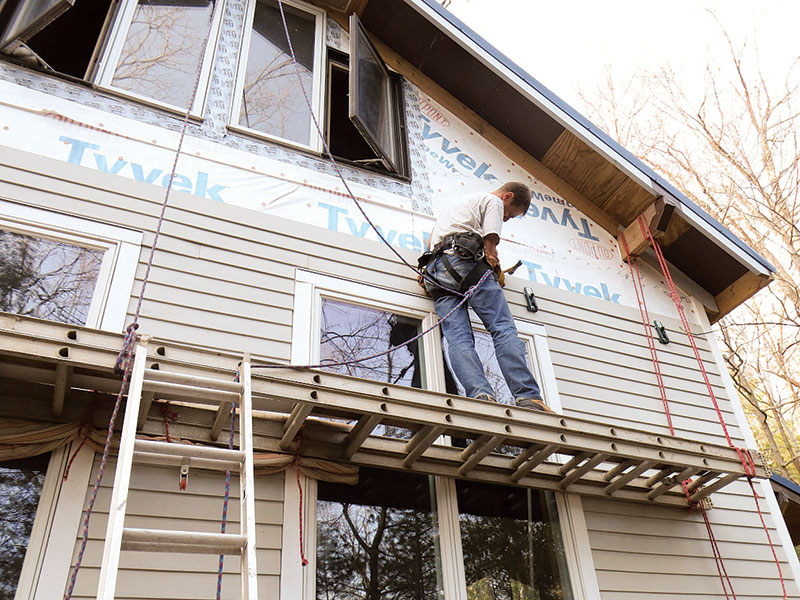 Bauman found some of what he needed in a 1930s Craftsman just a few houses up the street from his own. The property was under new ownership and the original house was scheduled to be demolished.

“I knew who was going to buy it,” he says. “So I asked if I could go in and take up the hardwood floors.” Soon, he was ripping out doors, doorknobs and railings, too. A few houses down, another teardown provided windows.

“I thought, I’ve got flooring, I’ve got windows,” says Bauman, now 46. “When I started paying attention, there were building materials everywhere.” With the help of friend and builder Dave Springberg, owner of Arlington-based Spring Street Development, Bauman was soon salvaging materials from more than a dozen Arlington and McLean homes that were destined for demolition. 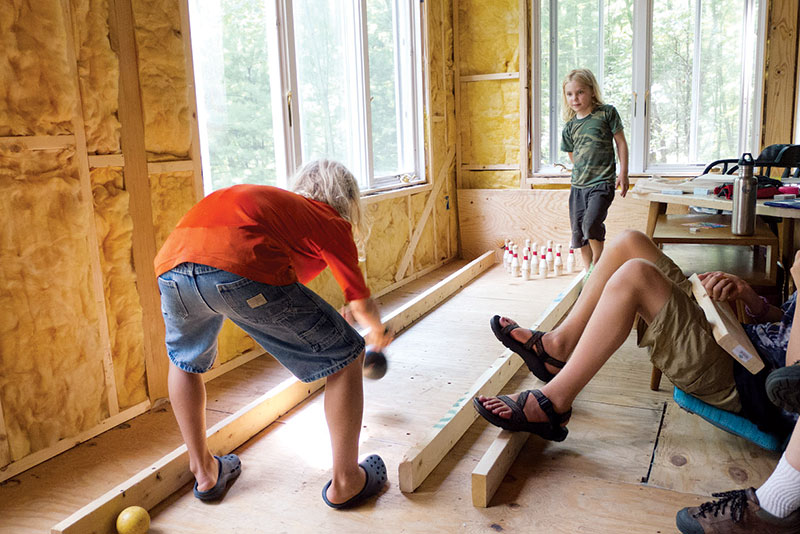 Tor and Lenka playing with a makeshift bowling lane. Photo by Hans Bauman

He pulled pine paneling out of retro basements, and pried off piles of siding that otherwise would have ended up in the landfill. Craigslist and Freecycle proved gold mines for more discarded doors and windows. A man in Alexandria who was stripping plywood off old delivery trucks (and replacing the wood with metal) let Bauman have his fill of compressed wood that would have become trash.

There were rolls of unused insulation from an abandoned attic, used decking and even a marble countertop that was nearly new and better, Bauman says, than the one in his primary home.

In Arlington’s old Westover Library, he nabbed his favorite find of all—a midcentury modern, cast-iron railing that was his for the taking before the library was demolished in 2010. “I paid for very, very little,” he says.

At home, his growing stash of building supplies was spreading like kudzu. 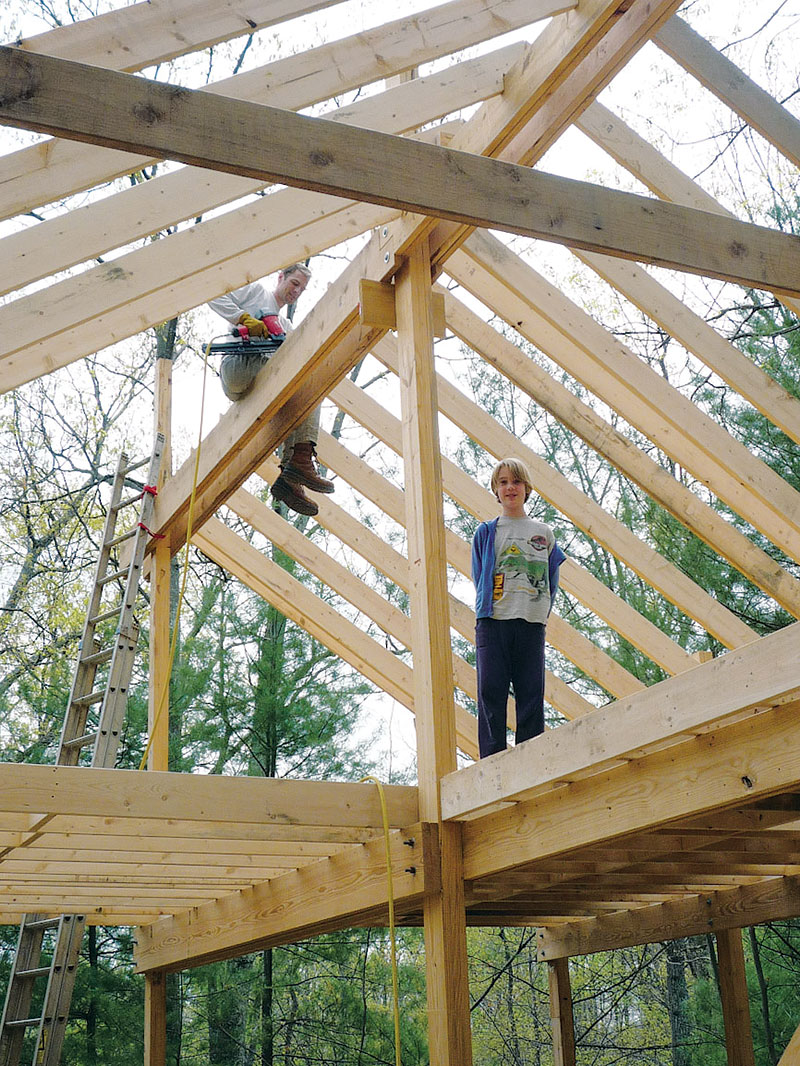 In a notebook, he scribbled down ideas and sketched in a frenzy. Inspired by the owner-built house movement that began in the Pacific Northwest in the late ’60s, Bauman looked to author Ken Kern for examples of how to frame a house with poles on a grid, doing the math to calculate how much weight each post could bear. But with an entirely blank canvas, he was having trouble nailing down just what kind of cabin he wanted.

“I thought it would be fun to try building a round house. Then it was going to be one house for the kids and one for us…then I thought maybe a tiny house, with just enough room to sleep.”

Eventually, his materials made the decision for him. He began hashing out a design based on the sizes of the windows he’d stockpiled, the length of discarded railings he’d saved.