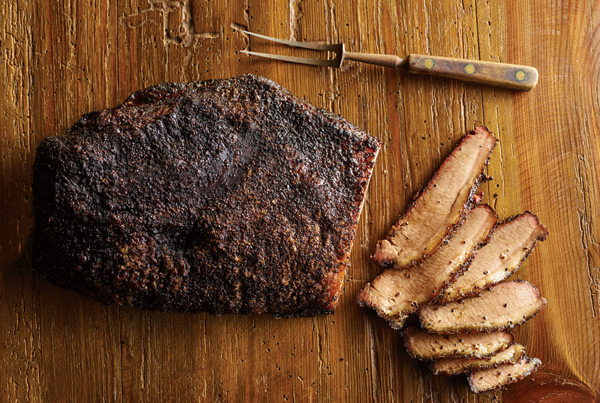 If there’s one word that gets our attention, it’s brisket. And the latest siren call is the sweet smell of low-and-slow smoke emanating from Texas Jack’s, the Arlington barbecue joint that opened in the former Tallula space in December.

We headed there the week it opened to cull a few secrets from chef and pitmaster Matt Lang, whose bona fides include stints with Fette Sau in Brooklyn and Hill Country in Washington, D.C.

“I discovered you need to develop a personal relationship with the briskets overnight [as they are cooking] and make sure the smoke is always right,” Lang says. “And to spritz often with a half-apple-cider-vinegar, half-water solution. That keeps a moist exterior instead of a dry, blackened, bitter and crusty one.”

Another lesson he learned: Use quality meat. He opts for Master’s Choice whole briskets from Allen Brothers in Chicago.

Each brisket starts with a light, 24-hour salt-and-pepper rub. Then it goes into a Southern Pride wood-burning rotisserie smoker, with one log of oak added every two hours for about 11 hours, and a good spritzing every 90 minutes.

To test for doneness, Lang squeezes the fatty top flap of meat on a brisket, then holds it in the palm of his hand. “It should sag slightly on either side,” he says.

As his knife slices through the meat, it oozes with juice. There’s no noticeable pink smoke ring, but so what. It is perfectly seasoned, tender with a bit of chew, rich and vaguely, rather than overwhelmingly, smoky. We approve.