What’s the Deal With Those New Deal Murals in the Clarendon Post Office? 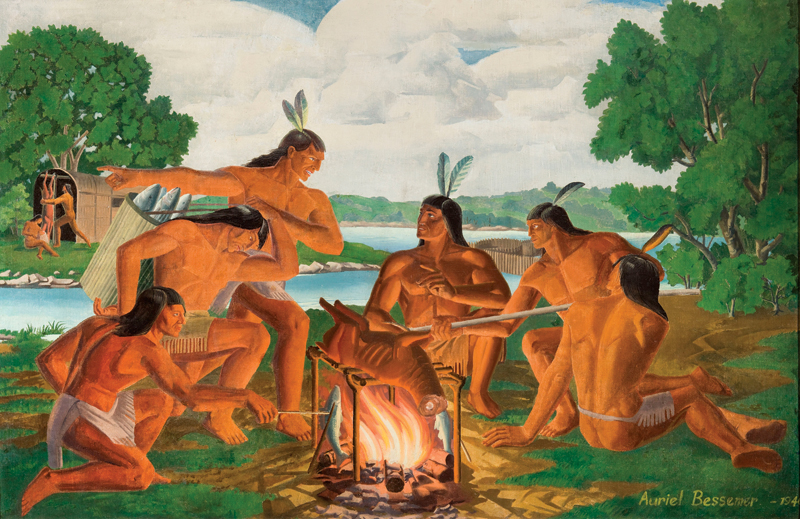 Auriel Bessemer was an intense, spiritual man who grew up in a Florida religious commune and believed in reincarnation.

After studying art in New York City, he came to Washington in 1933 in the midst of the Great Depression. With characteristic “pep”—as one local art critic put it—he opened a progressive art gallery in Dupont Circle and later published a poem (concurrent with a design for an anti-fascist mural that was never released) that warned, “Prepare mankind, yet blind, for mutual slaughter.”

Bessemer’s portraits won praise from critics, but his art fortunes never rose. To make ends meet, he began entering New Deal art competitions to paint murals in public buildings. The seven oil paintings—commissioned by Arlingtonian Edward B. Rowan, a top federal art official and watercolorist—that adorn the interior of the post office on Washington Boulevard are considered to be Arlington’s first works of public art. As compensation for them, Bessemer was paid $800 in 1940. (That’s about $13,500 by today’s standards.)

Though a stylized romanticism pervades his work, some of Bessemer’s subjects would prove controversial. Grouped in with the post office’s bucolic scenes of picnickers at Great Falls, farm workers harvesting apples and U.S. Army polo players at Fort Myer is a portrayal of Robert E. Lee’s commission to lead Virginia’s armies. At least one federal official had misgivings about memorializing the Confederate general, but that concern was not shared by Arlington County Board chairwoman Elizabeth Magruder, who reportedly had relatives on both sides of the Civil War, according to a 1938 newspaper account. (The murals also include a romanticized painting of enslaved people picking tobacco.)

More recently, historians have noted inaccuracies in two of Bessemer’s murals depicting American Indian tribes. John Smith actually met with the Massawomecks in Maryland (not in Virginia), and it’s debatable whether the men of the Nacotchtank (aka Anacostan) tribe on Roosevelt Island would have been doing the cooking, as Bessemer’s interpretation implies.

After serving as a graphic artist for the U.S. Army during World War II, Bessemer went on to paint some 50 murals in corporate boardrooms, restaurants, union halls and even railroad cars. But interviews suggest that he found his happiest assignment late in life: doing illustrations for a New Age religious group in Colorado.

Toby McIntosh lives near the Clarendon post office and has written a book, Apple Picking, Tobacco Harvesting and General Lee, about the Depression-era post office murals and their creator.