Is it Friday yet? If so, the chances are good there’s a party on Joel and Beth’s front steps. 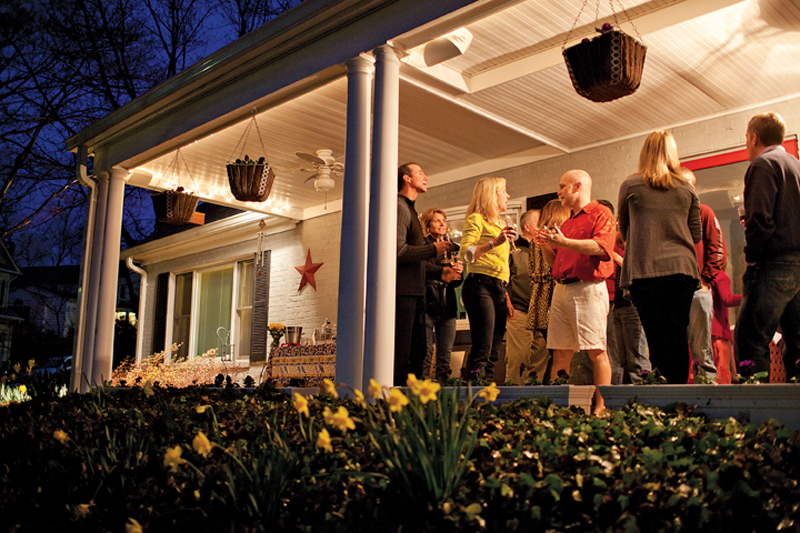 In 2004, my wife, Beth, and I remodeled our 1940s home in Country Club Manor—a neighborhood nested in the triangle created by Old Dominion Drive, Williamsburg Boulevard and the Arlington/McLean border that includes an eclectic mix of renovated ramblers and colonials. One of our most significant remodeling decisions was influenced by my wife’s Southern heritage. Born in Lynchburg and reared in Richmond, Beth insisted on adding a front porch as part of the design. While I agreed with her vision from an aesthetic perspective, I’m a Yankee from Illinois, so I had little sense of what a porch would bring beyond a charming appearance and shelter from the rain.

At 50 feet long and 10 feet wide, our porch can comfortably accommodate dozens of people. (If you were raised in the South, you understand that a porch can never be too big.) And, unlike a secluded backyard patio, where privacy is the intent, a porch says, “Come on up.”

People do. In fact, it wasn’t long after our renovations wrapped up that spontaneous gatherings began to form on the porch on Friday evenings. These casual affairs had no invitations or RSVPs. Basically, if you saw us outside, you were welcome to come over.

As our happy hours grew and became more regular, we gave them an official name: Porch Party Fridays. They expanded to include hors d’oeuvres, cocktails and wine. (The potluck aspect is now part of the fun.) One neighbor makes grilled wings that are so tasty that they barely make it up the steps before being devoured. Now folks seldom eat dinner before coming over, knowing their bellies will be filled. We’ve discovered that quite a few of our friends are accomplished cooks and bakers.

We’ve also discovered things about our neighbors that we never knew. One is a multi-Emmy-award-winning cameraman for a local television station. Another, a former college athlete, was inches from being drafted by the NFL. Still another is the daughter of a surgeon who pioneered hip replacements.

Eight years later, we host porch parties year-round, rain or shine. (To extend our use of the space during shoulder seasons, we’ve added a portable fire pit. When it’s too cold to be outside, we invite people in to sit by the fireplace.) There are no rules for attending. Guests can arrive early, come late, stay for a quick hello, or linger for hours.

Kids of all ages are welcome. They flutter on and off the porch like fireflies—occasionally touching down to grab a cookie or brownie—while their parents chat about school activities and arrange carpools. There is no better place to find the best plumber, electrician, or day care, not to mention teenagers who babysit, mow lawns and shovel driveways.

The porch has also become a forum for fun facts and trivia—such as what a saluki is. (A type of greyhound, it’s one of the oldest known breeds of domesticated dogs. More importantly, it happens to be the mascot of my alma mater, Southern Illinois University.)

These days we can have anywhere from a dozen to 50 guests on any given Friday. Word has spread to friends and colleagues outside the neighborhood. Now the porch plays host to visitors from many places outside of Arlington County, including people who used to live here but moved away. Whenever new families move into the area, the porch party becomes a housewarming.

We’ve learned that people take the tradition seriously. On one particular Friday when Beth and I were out of town, we received a frantic telephone call from friends asking why we weren’t on the porch (they were worried). Now we send a weekly email to past, present and potential guests—a list that includes nearly 60 families.

I never could have imagined back in 2004 that such a simple architectural decision would engender such a strong sense of community. But my Southern wife knew.

A talented girl in our neighborhood, Amanda (who is now 15 and a student at H.B. Woodlawn), even penned an ode to the porch. She wrote it when she was 10:

The temple of the neighborhood
Hallowed Hall of the Salukis
On Friday evenings we gather
Among the mosquito-repellent
Candles,
Ice-cold margaritas,
And salty snacks.
We live for the Heaven on Earth
The Porch.

How better to describe our little slice of heaven right here in Arlington?

Joel Lovelace and Beth Arthur have lived in their neighborhood since 1993. Joel works at the U.S. Department of Labor and Beth serves as the Arlington County Sheriff (she was reelected last November for another four-year term). Their sons, Kenneth, 17, and Stephen, 14, attend Yorktown High School.