These Tricked-Out Halloween Houses Are a Must-See

It may be a BYOT (bring-your-own-treats) year, but these creepy residences are still worth a visit.

In some ways, Halloween should be the perfect holiday for the pandemic. Everyone’s outside, elaborate masks are a must, and all those spooky tattoos and chocolate bars are individually wrapped. But with the novel coronavirus still cause for concern and Arlington County recommending residents avoid the traditional door-to-door trick-or-treating, some Arlingtonians are rethinking their traditions. Or at least putting a fresh twist on them.

In Douglas Park, Dan and Kristin Donaghy have been putting out spiderwebs and skeletons for years. “We have five kids—16, 14, 12, 10 and 7,” says Kristin, standing on a porch whose entry lights have been transformed to lighted jack o’ lanterns. “Hence all the decorations and the craziness.” 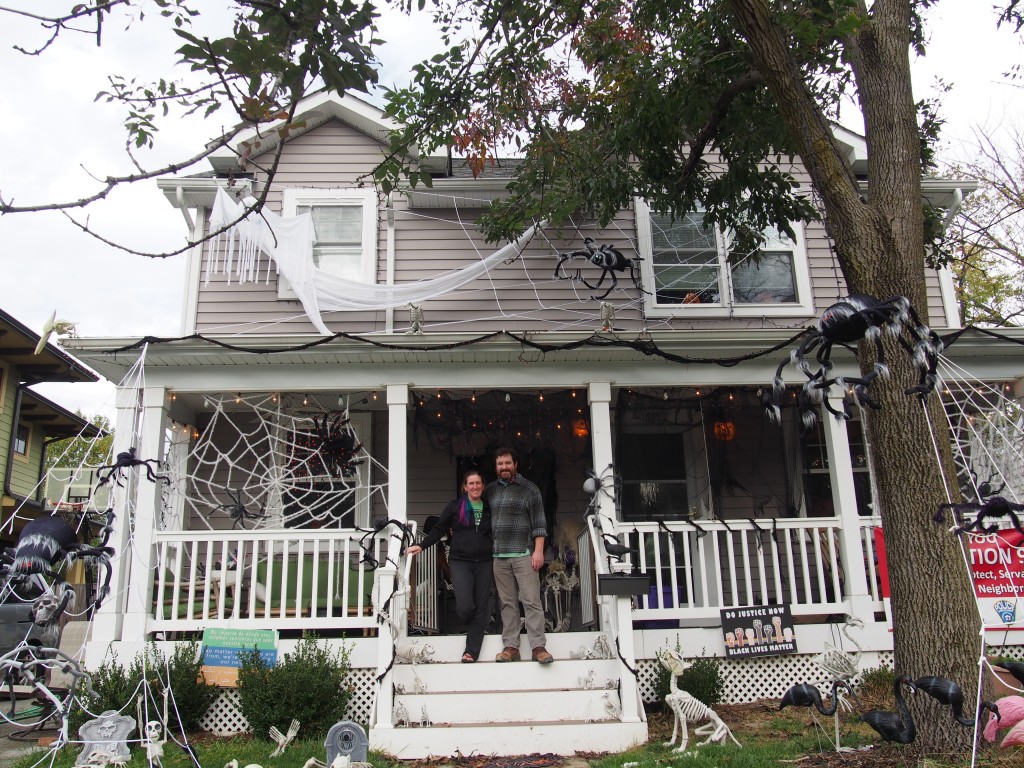 Those decorations include whimsical groupings of fish, unicorn, and frog skeletons, a giant spider web stretching across the house, and a seemingly life-size skeleton of a pony.

“That was on sale,” Dan volunteers.

The family favorite is the flamingo skeleton. “We try not to make it scary,” Kristin says. “We just want your traditional bony Halloween.” 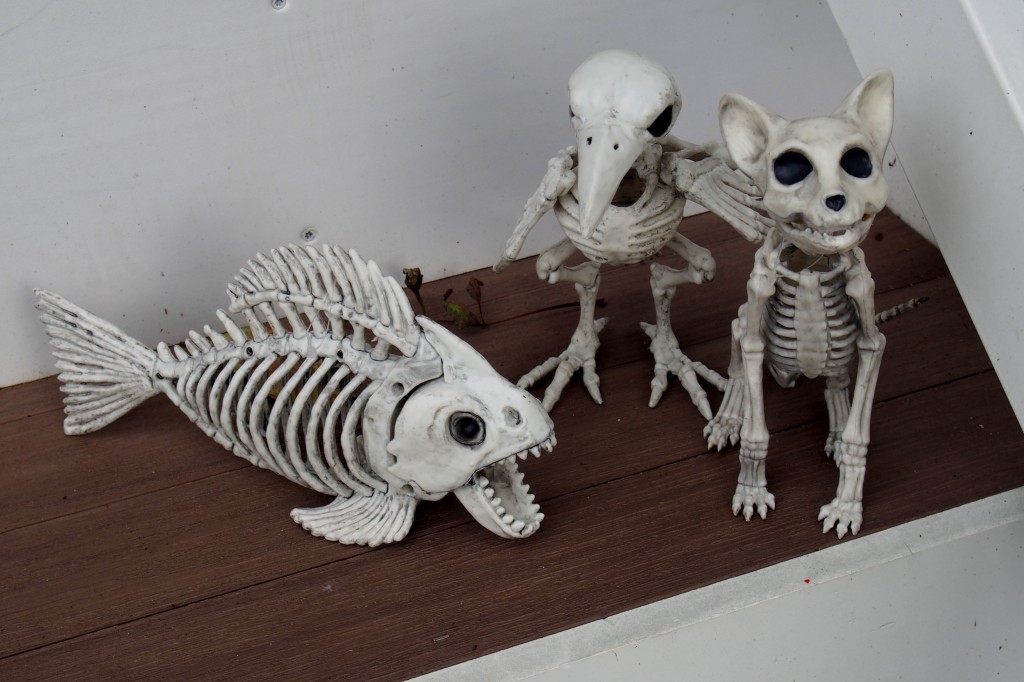 Creepy skeletons on display at the Donaghy residence. Photo by Alison Rice.

They aren’t the only ones on their South Arlington block who go all out for Halloween.

Down the street, the Carlsons are engaged in a little friendly competition with a skeleton surgeon, towering inflatable ghost and skeletons on skateboards and mountain bikes.

“I used to do a ticker” to count the trick-or-treaters, says Yvette Carlson, who has lived on the street for 20-plus years. “One year we got over 300 kids.” 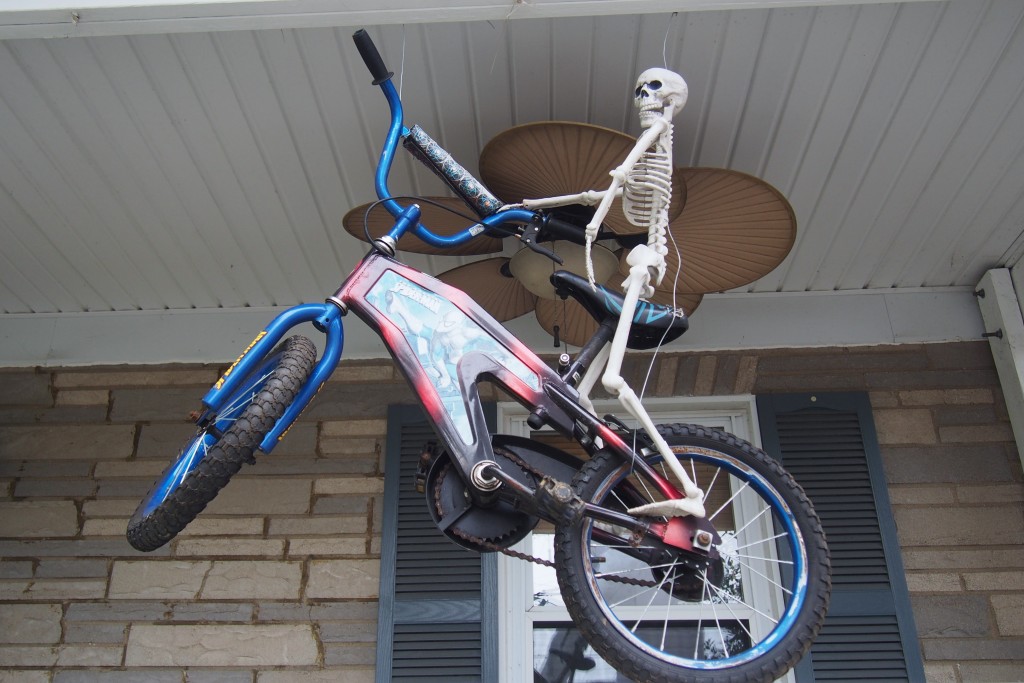 Halloween decor at the Carlson residence. Photo by Alison Rice.

Of course, Halloween 2020 is shaping up a little differently. While the Donaghys put up their arachnids a little early and have been turning on the lights on Friday and Saturday nights, they plan to go dark on Halloween, due to concerns about Covid.

It was a hard decision for the family. “I buy 40 bags of candy every year,” says Dan, who worried about the impact on local families with stretched food budgets. “It’s not just the pandemic—it’s the economy. Maybe some families can’t afford to put candy in their shopping cart and are considering going trick-or-treating just to get the candy.”

He decided to help, posting an Amazon wish list and leaving a bin for sweet donations on his porch, just beyond the spiderwebs. The haul? 12,000 pieces of candy.

“I had to turn off the Amazon wish list,” says Dan, who mobilized volunteers to sort and divide the candy for the two food pantries at Randolph and Claremont Elementary schools.

In Long Branch Creek, Laura Icardi is another Arlington parent who is having second thoughts about trick-or-treating this year. “Most of the families I know are a little bit uncomfortable with it, so if only half the neighborhood is going or only half the neighborhood is giving out candy, it’s just not going to be the same,” she says. “It just felt like it would be disappointing.”

So she decided to try something new: a driving tour of houses decorated for Halloween.

“My hope is that my kids will be able to adapt this year to enjoy the holiday,” says Icardi, who has been capturing her favorite local Halloween sites in a public Google map. “I thought that people would have some good ideas, and they did!” (Got a spooktacular scene to share? Add it to the “Halloween Houses” layer of the map,  Icardi advises.)

One of the houses on the route is the Springston home in Cherrydale, where Scott, Kathy and their son Dakota have been presenting an elaborate exhibition for years. “It started with carving pumpkins and making robots, and then it just snowballed,” says Scott. 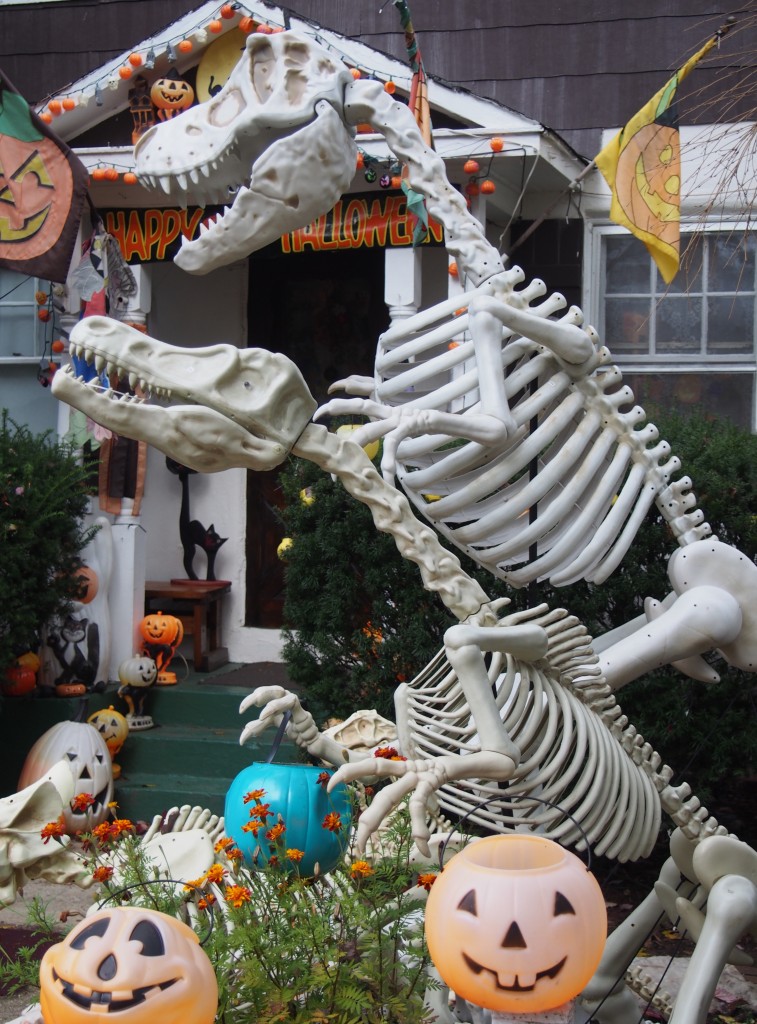 T. Rex skeletons at the Springston residence in Cherrydale. Photo by Alison Rice.

Dakota handles the graveyard (which includes an actual 1870s tombstone) and the shelves of ghoulish groceries at what he calls Granny Witch’s Shop. “I like adding little details,” he says. 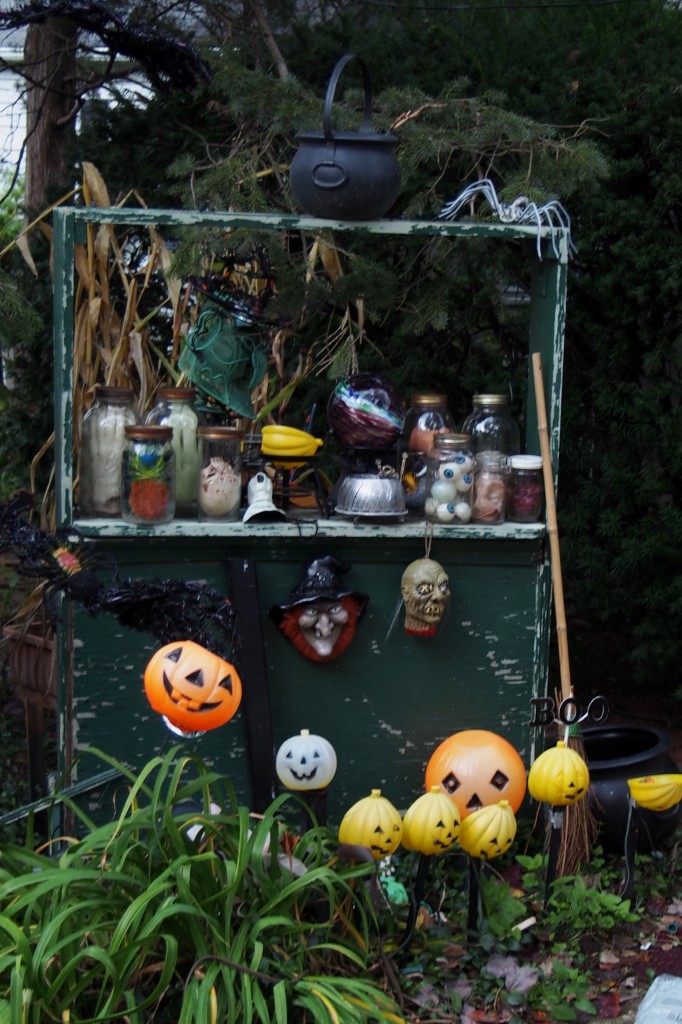 But the main attraction might be the skeletons, which have been pressed into service in years past as “The Ungrateful Dead,” survivors of an alien spaceship crash, or political commentary.

“The dinosaurs stay the same, but the political side changes,” Scott says. The Falls Church native has been doing political-themed Halloween displays during election years since the days of Jimmy Carter; 2020 is no different, with a cutout of a GOP circus elephant, a figure of the president in clown shoes and a collection of skeletons wearing signs with pointed comments.

“Who needs scientists; we’ve got the pillow guy!!” reads one. 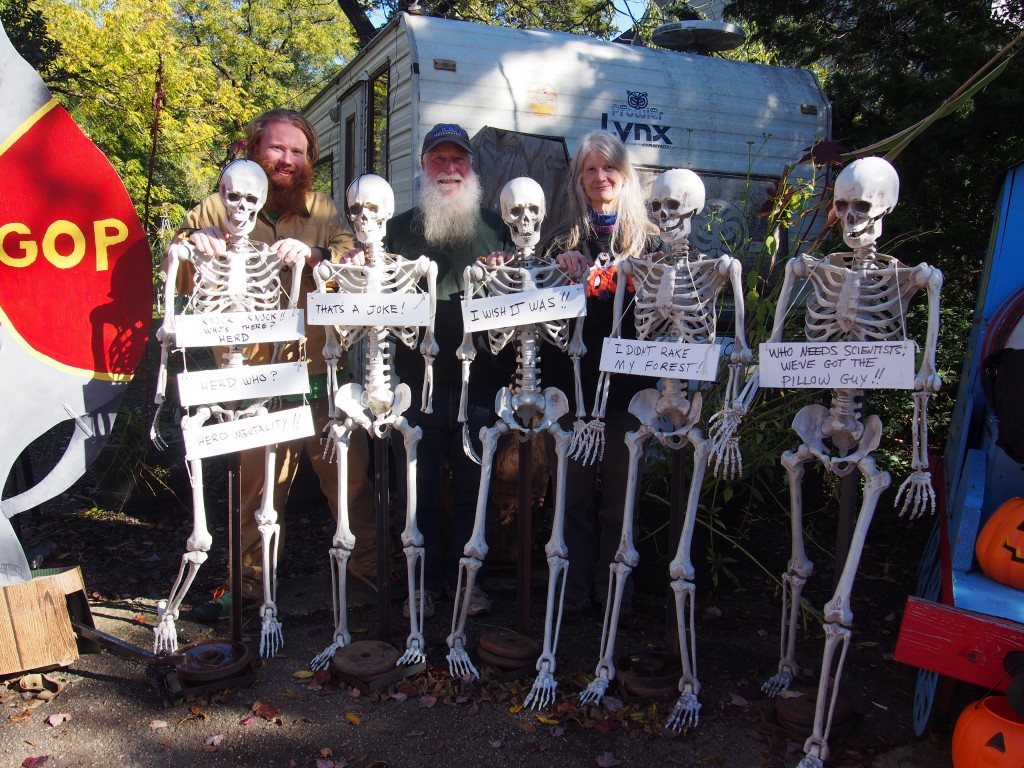 Like so many others, the Springstons are wondering how to celebrate the holiday itself in 2020. In past years, Kathy has dressed as a witch to oversee the generous candy offerings while Scott and Dakota have roamed the neighborhood dressed up as Jedi knights, escaped prisoners and other disguises. This Halloween, though, “we don’t want to leave the yard,” says Scott.

So they’re putting their family creativity to work on a candy chute or perhaps a catapult. “There have been several different debates,” says Dakota.

What isn’t up for debate among these Halloween enthusiasts? The satisfaction they feel when their “regulars” stop by year after year, eager to see what’s new among the pumpkins.

“I hear their little shrieks of joy,” says Carol Hamblin, who welcomes 100 trick-or-treaters each year in Fairlington. “It’s all about the joy of the little ones and the joy they bring to all of us.”