This Home Makeover Is a Home Run

A redesign for a baseball-loving family includes subtle references to America's favorite pastime. 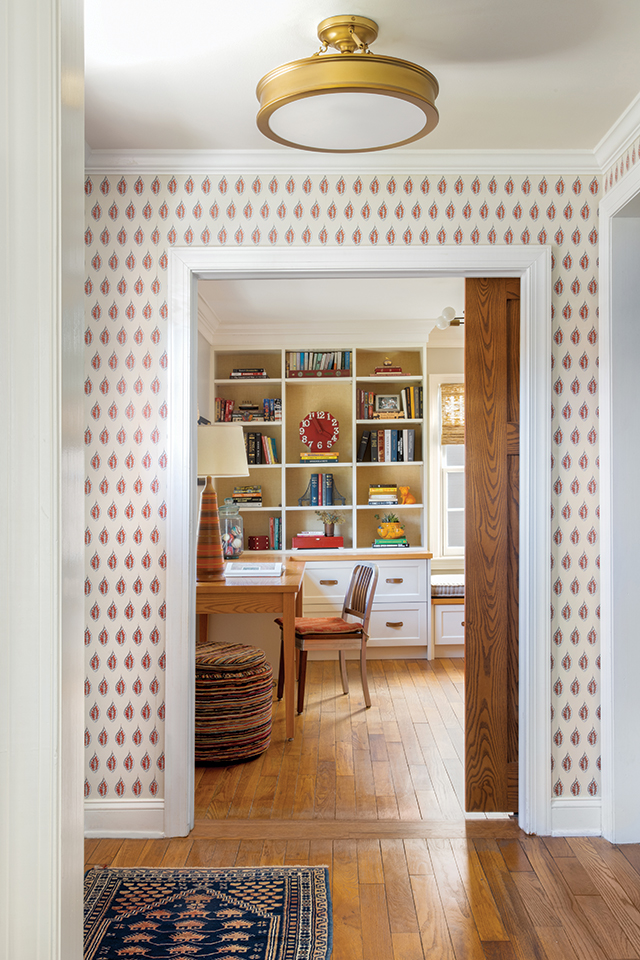 A view into the office from the foyer. Photo by Jenn Verrier

Every design project has a starting point, and in this case it was a photo of Roberto Clemente.

The framed shot of the legendary Pittsburgh Pirates right fielder was one of the few things that was working in the home office Tara Haney sometimes shared with her husband, Gary, a Pittsburgh native who played baseball in college. Aside from that, the first-floor bedroom they were using as a makeshift work space back in 2014 was less than inspiring.

“I had a desk in there, a printer on the floor and a metal file cabinet, but it wasn’t functioning well,” says Tara, who was then working remotely as a consultant for Accenture. (Today she’s with the Department of Justice; Gary is at the Department of Commerce.)

Add to that the chaos of two young kids. At the time, their sons, Ben and Grayson (now 14 and 13), were in elementary school and wanted mom’s attention. Sometimes they needed help with homework. “I love for things to be organized,” Tara says. “The boys would come home from school and we’d just have stuff everywhere.” 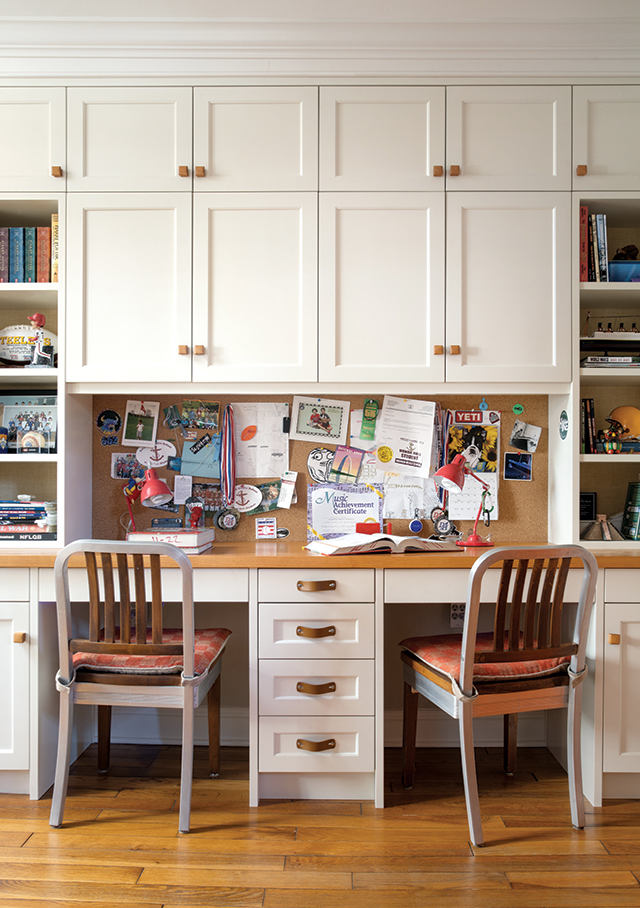 At one point the Haneys had added French doors to the office, thinking they could close them for noise control, but the view into the front hallway proved distracting. The setup just wasn’t good for concentration.

So they invited over a friend, designer Kelly Holland—whose son played Arlington Babe Ruth Little League with their sons—for a walk-through of their 1940 Cape Cod-style house in Bluemont. Holland asked questions about their needs, likes and dislikes, and sketched out a design plan for the office. It included built-in desks, display shelves, a window seat and plenty of storage.

Choosing the finishes is where things got fun. The built-ins, which featured side-by-side workstations for the boys, have a desktop made of ash—the same wood used to make baseball bats—and leather drawer pulls that evoke the look and feel of a well-worn ball glove. 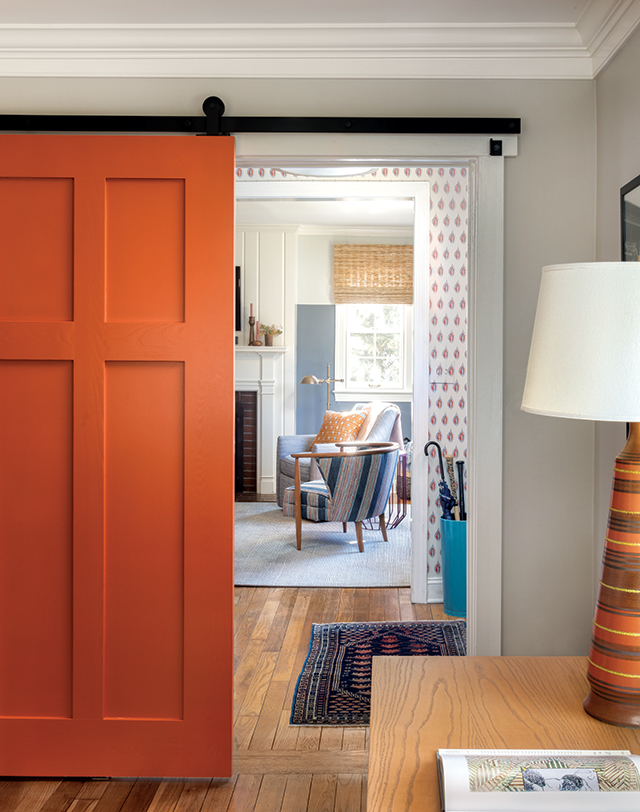 A sliding barn door separating the office from the front hallway is painted orange on the office side, but stained on the foyer side for a more formal look. The foyer features “Tunisian Leaves” wallpaper by Arlington textile designer Kate Hougen of Mira Jean Designs. Striped lamp from Etsy. Photo by Jenn Verrier

Across the room, a two-gallon glass jar on a freestanding desk holds a collection of souvenir balls from Major League ballparks, as well as from home runs hit by the Haney boys. (Although Grayson stopped playing at age 10, Ben played travel baseball through the end of eighth grade and is now an Arlington Babe Ruth umpire.)

The Clemente photo now hangs next to a nifty sliding barn door that can be closed off for privacy. But otherwise the sports references are subtle, like an inside joke. “I always love designs where there’s more than meets the eye,” says Holland, who opened her Arlington business, KPH Studio, in 2012.

Once the office was finished, the Haneys asked Holland to tackle the living room across the hall. Most of their furniture was ready for retirement, so the designer gave the entire room a refresh, pairing neutral seating with pops of color and pattern.

Multipurpose space-savers were key in the not-so-big room. Two upholstered swivel chairs can be rotated inward for conversation, or outward for watching TV. 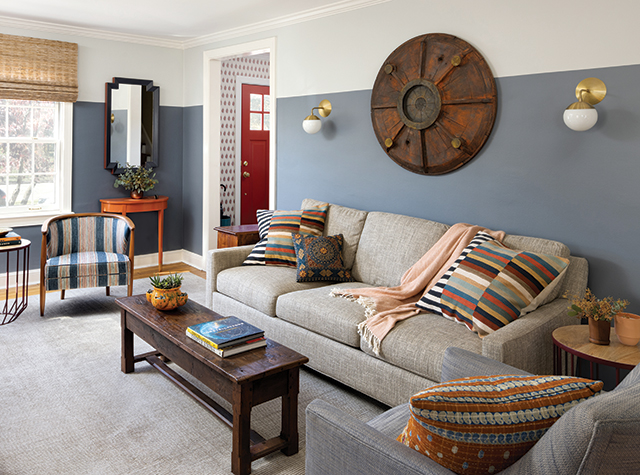 Creative touches in the living room include vintage factory molds repurposed as wall art, a rustic coffee table/bench from Chairish and sconces from Cedar & Moss. The round-backed chair was an Etsy find that designer Kelly Holland had reupholstered locally (Flowers Upholstery). Photo by Jenn Verrier

A colorful ottoman with storage space inside can be used as a tabletop, or as extra seating.

Holland’s eye for pieces that are both unique and practical is further evidenced in a small chest turned sideways against the arm of the sofa, which faces the front door. “Each family member has their own drawer [in that chest],” Tara says, “where we can keep all the junk we need before we walk out the door—keys, sunglasses, masks. It’s perfect because it also functions as an end table. You can put drinks on it. Kelly found it at some antiques shop on Cape Cod. Everywhere she goes, she is thinking about what might work in a certain space.”

Next up to bat: the couple’s master bath, where the awkward layout (a casualty of a previous owner’s renovation) included a massive and seldom-used tub next to a generous shower stall. Nixing the tub freed up space for a vintage buffet that Holland repurposed as a bathroom vanity. 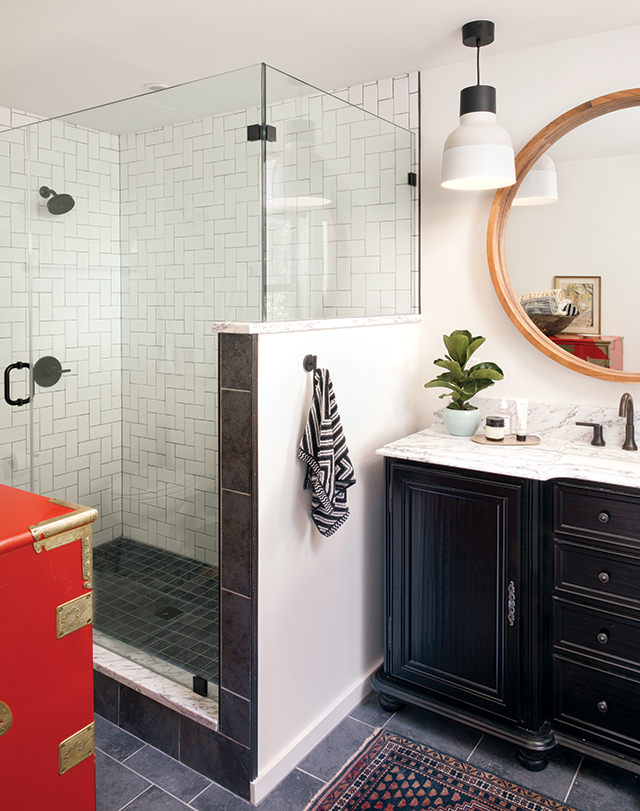 In the master bath, a round mirror and pendant lights from CB2 complement a vintage buffet (now a vanity) that Holland discovered at Pear Tree Cottage in Vienna and repainted. The marble vanity top is a remnant piece from Pyramid Granite in Springfield. Photo by Jenn Verrier

“We had to reduce the depth of the second drawer to accommodate the plumbing underneath,” says the designer, “but otherwise it offers nice his-and-hers storage on either side.”

Now the Haneys are considering a makeover of their master bedroom, which Tara describes as a jumble of “builder-gray carpet, mismatched furniture and Ikea dressers” that, frankly, disappoints in contrast to their sleek, new bathroom. Gary has always wanted to add a small balcony—a spot for morning coffee—off of the bedroom, which overlooks the backyard. Working from home during the pandemic, he has had time to dream about it in between conference calls, which of course he’s juggling from the comforts of that home office, under the gaze of his baseball hero, Roberto Clemente.

In July, Tara and the boys surprised Gary with a second photo for the office. This one captures the Hall of Famer facing the crowd after nailing his 3,000th career hit. It would be Clemente’s last game before his untimely death in a 1972 plane crash.

“The Haneys really have been the ideal clients,” Holland says, “honest about what they know they want, and also what they don’t know they want. They trust us and are open-minded. Give us that trust and we run with it.”

Jenny Sullivan, editor of Arlington Magazine, is a Nats fan with office envy.