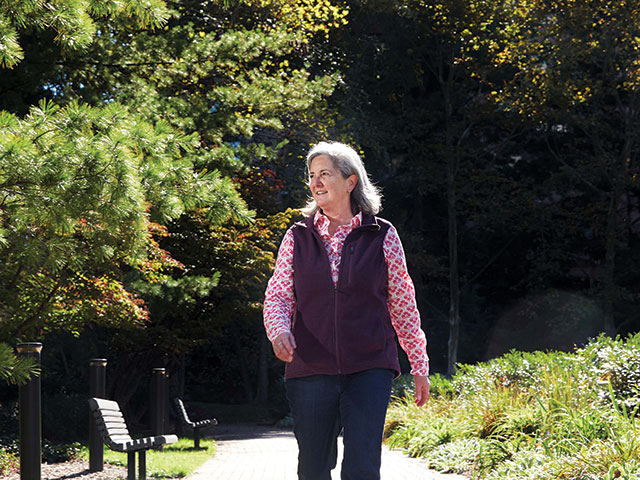 Lori Scott loves to ski, schussing down blue-square slopes, slicing through fresh powder and feeling winter’s chill on her cheeks. But during a Steamboat Springs, Colorado, vacation 13 years ago, she felt another sensation.

“I was in bed around 11 with a book when I felt extreme difficulty breathing, like an elephant was sitting on my chest,” says the now 54-year-old. “It took about a minute before I said to my husband, ‘I think I’m having a heart attack.’ ”

While maybe a third of women have atypical heart attack symptoms—back, jaw, even earlobe pain; nausea; maybe some dizziness—Scott’s were classic: shortness of breath; numbness traveling down her left arm; an elephant (heart attack’s spirit animal) taking a siesta on her chest.

“It was unmistakable,” says the Arlington resident, who lives off Military Road and works as the chief information officer for NatureServe, a biodiversity conservation group.

Still, the couple debated going to the emergency room, which always robs four hours from your life, no less your vacation. Scott didn’t think she was a top contender for a coronary. She was 40, in good shape, with no close family history of heart disease—at the time. (Her mother would die suddenly a year later, at 65, of what Scott believes was a heart attack.)

“You always second-guess if what you’re experiencing is worth going to the ER for,” she says.

When more cautious heads prevailed and Scott finally showed up at the mountain hospital, she was the lone heart event in a sea of breaks, sprains and dislocations. Her electrocardiogram (EKG) was normal, and her level of troponin, a cardiac enzyme that climbs after a heart attack, was just fine. Her symptoms subsided, and the docs chalked up the event to indigestion—she had eaten her first elk steak for dinner. They discharged her at 4 a.m. with, “You’re fine; ski hard tomorrow.”

The next morning dawned on Scott’s last day of vacation. She slept in, and with “ski hard” ricocheting around her brain, she slapped on the new skis she’d been eager to try and joined her husband on a lift around noon.

You can guess what happened next. Halfway to the top, she turned and said, “Guess what, Joe. I’m having a heart attack. Again.”

That realization led to a ski-patrol toboggan ride down the mountain and an ambulance assist back to the same hospital that had discharged her 10 hours earlier. This time, her EKG was abnormal, her troponin level had spiked and she was admitted. The next day, Scott was airlifted by helicopter to a major medical center in Fort Collins, where a cardiac surgeon placed two stents into her blocked arteries.

For years, nobody could figure out why her arteries had been blocked. Then, a decade later, on a hunch, Scott’s cardiologist sent her records to the Mayo Clinic, where Scott was diagnosed with SCAD.

Spontaneous coronary artery dissection (SCAD) is a rare and emergency condition that occurs when a tear develops in the heart blood vessels of, most commonly, a woman in her 40s or 50s who is otherwise healthy. The tear can slow or block blood flow to the heart and cause a heart attack, heart arrhythmia or sudden death. Research suggests SCAD is responsible for 40 percent of heart attacks in women under age 50. The recurrence rate for SCAD is estimated to be 20 percent.

Scott, who is now enrolled in Mayo’s SCAD registry and research study, sips a glass of ice water and waggles her right foot subconsciously as she talks about how lucky she feels to be alive with no major heart damage. Her skiing days now behind her, she walks for exercise and tasks her husband with shoveling snow.

“I don’t want to be melodramatic, but I do try to use this as a lesson to appreciate what I have,” she says. “I try not to put things off, like visiting friends and enjoying the life we have. I care more about treating myself right.”