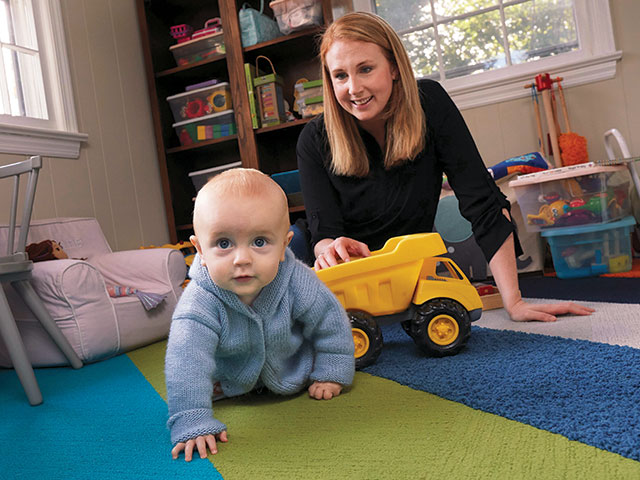 Spelling tests give many fourth-graders the jitters, but not Elizabeth McKenzie. She remembers being a go-with-the-flow kid who prepared for weekly quizzes and didn’t stress much about getting A’s.

Still, her teacher, school nurse and parents attributed it to test anxiety when, one day in the mid-1980s, the 9-year-old’s chest suddenly tightened, her heart raced and her head felt light as a cloud.

“I’ve probably had ventricular tachycardia my whole life that was misdiagnosed as anxiety,” says McKenzie, an Arlington speech and language pathologist.

McKenzie wears a weekday ponytail and a resigned smile when she talks about all the decades her doctors got it wrong. In junior high, when she was often short of breath, doctors called it exercise-induced asthma, even though she wasn’t exercising before, during or after the gasping spells.

When, as a 30-year-old new mother, her heart played Red Light/Green Light, constantly racing and stopping, her GP said parenthood was stressful, urging her to relax and breathe deep.

And when she became pregnant again in 2018, and her Apple Watch showed her heart seesawing between 75 and 175 beats per minute—a dozen times a day—the obstetrician in rotation talked about her “beautiful” blood pressure, she recalls, then gave her a physiology lesson about pregnancy and blood flow and blah, blah, blah.

“I knew I wasn’t crazy,” says McKenzie, eyes still glistening with frustration, remembering how her concerns and complaints were diminished or dismissed. As in space, no one could hear her heart scream.

Kathy Wolf, who heads an OB-GYN practice in Annandale, has compassionate brown eyes, straw-colored bobbed hair and a quirky sense of humor. Her YouTube channel is titled, “Dr. Kathy at Your Cervix.”

“We’ve been through a lot together, trying to get me pregnant,” says McKenzie, who’s seen Wolf for fertility issues since 2012. Regrettably, scheduling conflicts during her second pregnancy kept doctor and patient apart until McKenzie was 28 weeks along.

McKenzie recalls choking back tears as she spilled out her symptoms and fears. How her heart galloped a dozen times a day, how she obsessively counted her heartbeats on her smartwatch, how she didn’t want to seem dramatic, but she feared she was crazy.

Then, for the first time in 20 years, a doctor said, “Let’s get you to a cardiologist.”

In a perfect world, that would end the story. The hero cardiologist would instantly diagnose and treat McKenzie’s heart problem, and she’d live her life knowing she wasn’t nuts, just a young woman with a super-fast heartbeat.

But McKenzie’s EKG was normal, and the cardiologist, who wasn’t accustomed to treating pregnant women 40 years younger than anyone else in his waiting room, was stumped.

McKenzie sensed he, too, believed anxiety was the culprit.

Then, like the spectral whisper in Field of Dreams—If you build it, he will come—she recalled Wolf’s advice: “Push for a heart event monitor.”

A cardiac event monitor is a cellphone-sized device with electrodes that attach to your chest and measure and record heart activity. A patient typically wears it for a day. Sometimes a monitoring staff remotely keeps an eye on readings in case the device detects something weird or dangerous.

Two weeks passed before McKenzie was fitted for the monitor by a technician who waved her goodbye with, “If you don’t hear from us, bring it back in 24 hours.”

She made it three hours.

“My phone rings, and it’s the remote tech saying, ‘Are you okay? Are you safe? You need to go to the emergency room!’ ”

McKenzie demurred, saying she wanted her doctor to see the wild heartbeats that were panicking the monitoring staff.

“They called back in 30 minutes, then five more times in five hours,” she says. “Finally, a supervisor was on the phone saying, ‘I must insist you go to the emergency room.’ ”

McKenzie, then 32 weeks pregnant, relented with an eye roll and drove with her husband, Evan, to Virginia Hospital Center’s Emergency Department, where the fun was about to begin.

“They hooked me to a monitor and, all of a sudden, the alarm goes off. Everyone’s freaking out. The doctor runs back and looks at the monitor and says, ‘It’s ventricular tachycardia.’ They get a crash cart and get me ready for the paddles, because they’re worried about cardiac arrest. And the doctor says to me, ‘This can cause strokes. You’re so lucky you never passed out while driving your child.’ ”

Later, Wolf held her hand and said, “You were trying to tell us this all along. And you couldn’t get anyone to listen.”

Today, McKenzie manages her arrhythmia with a beta-blocker that slows her heart to about 50 beats per minute, ironically, an overcorrection for the problem she spent a lifetime trying to convince doctors she had.

“I’m still recovering mentally and emotionally,” says the Arlington mom, who delivered a healthy baby boy, Patrick, about a year ago.

“I grew up in a house where we trusted when a doctor said, ‘You’re fine.’ Going against a doctor? I wouldn’t have done that…before. Now, I’m a much more active consumer. I’ve been on so many different medications, and if I have any side effects, I’m quick to call or text. Before, I wouldn’t want to be annoying. Now, I’m comfortable speaking up.”