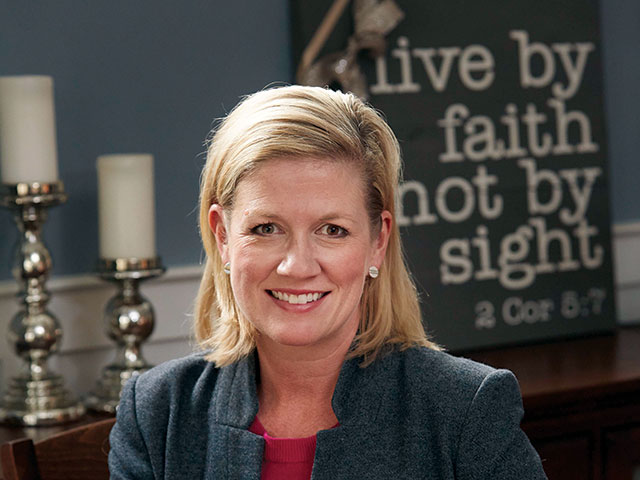 The only identity she has trouble wrapping her head around is “heart attack survivor.”

“For a long time, I’d call it a ‘cardiac event,’ ” says Landers who, for the first time, is speaking publicly about the heart attack she suffered five years ago. “It’s still difficult to say the words—heart attack. It’s still unbelievable.”

Her new reality began early on Good Friday morning when she was 40.

“I woke up and felt some pressure in the center of my chest,” she says. “I wasn’t in so much pain. I wasn’t short of breath. But I knew something wasn’t right.”

Landers, who lives in Falls Church City, woke her husband, Paul, and told him to call 911. She asked him to instruct the EMTs to turn off their sirens because their 3½- and 2-year-old sons were still sleeping.

By the time the ambulance arrived 10 minutes later, “heaviness” had spread to her wrists, like someone was pulling on her arms.

The EMTs took Landers’ blood pressure, which was elevated to 158/100. They gave her a baby aspirin and drove her to Virginia Hospital Center, where her EKG was normal.

Some three hours later, however, Landers’ cardiac enzyme level rose high enough to win her a bed in the hospital’s cardiac wing. Around 10:30 that night, a sharp pain spread through her right shoulder.

Although nobody used the words then, the shoulder pain was the moment Landers had the heart attack, which had been revving up since morning. The nurses’ station monitor sounded an alarm, mobilizing a cardiac team.

“Within five minutes of the pain, a whole team of people were coming in, asking how I was feeling, giving me medication,” Landers says. A cardiac catheterization to scope out the problem was scheduled for Monday, the day after Easter.

Cardiac catheterization is used to locate a narrowing or blockage in blood vessels that is limiting blood flow to the heart. At 9 a.m. on Monday, doctors inserted a long, thin tube into a blood vessel in Landers’ groin, threading it through a succession of connected blood vessels to her heart. That’s when they found the “rupture.”

Landers uses a little geography and a lot of hand motions to describe where her doctor found the rupture. If you think of the main coronary vessels as the Chesapeake Bay, and lesser vessels as, say, the Patuxent River, then her rupture was hidden in a slim creek that jutted from the river that flowed from the bay.

“The pain I felt in my shoulder was when that little vessel popped,” she says. “The vessel was so tiny, that there was nothing they could do. Everything else looked good. When the cardiologist gave me the report, she said, ‘If I could order up a heart attack, it would be the one you had.’ ”

In other words, as heart attacks go, it wasn’t a bad one. Still, Landers remembers getting tripped up by those words.

“I said, ‘Wait. Order up a what?’ That was the first time I heard the words heart attack. I can’t even tell you how shocking it was.”

In hindsight, Landers—whose official diagnosis was “coronary arteriosclerosis”—says she shouldn’t have been so stunned; both of her grandmothers had survived heart attacks when they were in their 40s, so she had a family history of heart problems.

When I ask Landers how the heart attack changed her routine, she mentions the daily pills she will take for the rest of her life—a baby aspirin to thin her blood, medicine to regulate her blood pressure, and a statin to keep her cholesterol levels lower than what diet and exercise can do alone. For about a year, she carried emergency nitroglycerin pills in her purse, just in case.

The heart attack also rewrote the prayers she utters as a Sunday churchgoer and a believer. Since the event, she says, her prayers have essentially evolved from, “God, give me health” to “God, give me strength.”

“I was brought up to pray for the best outcome, pray that God will provide,” Landers says. “But today, I’m praying more for him to prepare me for whatever is to come.”