Expect egg-centric dishes and more at Huevos, slated to open this spring. 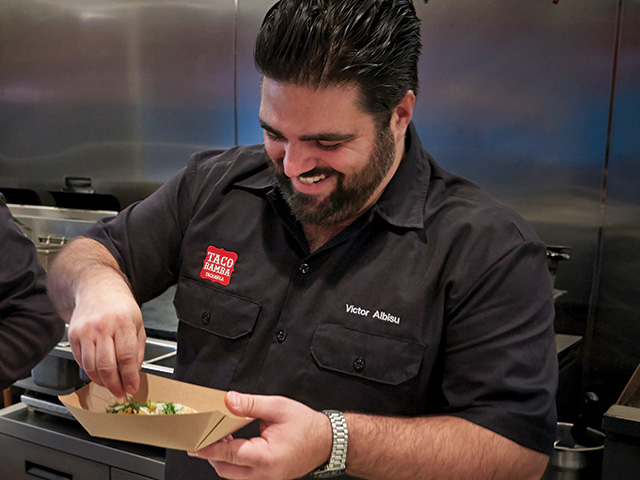 Come spring, Chef Victor Albisu will be opening Huevos, a fast-casual, egg-centric Latin restaurant, in the former Yona space in Ballston. The chef, who grew up in Falls Church and now resides in Vienna, has cooked in many of D.C.’s best-known restaurants—among them, 701, DC Coast and Ardeo (all now closed), Marcel’s and BLT Steak. In 2013, Albisu opened the upscale Argentinean grill Del Campo in Penn Quarter, and the first of what is now a chainlet of fast-casual taquerias, Taco Bamba. In 2018, he converted Del Campo into two restaurants—a Taco Bamba and a swanky Mexican restaurant named Poca Madre.

How did you get into cooking?

I started cooking when I was in the single digits. I’d go to Florida for the summer and work in my aunt’s cafeteria in Hialeah, making empanadas and croquetas and frying eggs on the plancha. As the years went on, my mom opened her own [food] market [in Falls Church] and I trained with Argentinean butchers. But I was first generation, and manning the butcher shop was not going to be the direction for me. The family said I was going to go to college and do something different.

But you ended up going to cooking school anyway.

I was studying international relations. I worked for different companies assisting Latin American initiatives, but it was bureaucratic. I had a hard time being in an office, being told what to do. I missed cooking. I found the Cordon Bleu on the internet, sold everything I owned and moved to Paris.

You raised eyebrows when you opened Taco Bamba.

It has been one of the greatest lessons of my life. Taco Bamba was a hidden little nothing in the armpit of a strip mall with no street visibility. We had the opportunity to let a business flourish without needing to hit a grand slam right out of the park. It took me three years before I was successful enough to say, Let’s go look for another one.

What did that experience teach you?

I learned I could open a business, let it struggle through its first year and then grow it. I’m not the guy who’s going to pay top-dollar rent for the top-dollar space. Yes, location, location, location—I get it. But perfectly located spaces can fail. For me, it’s about the quality of the product and giving it the right opportunity to grow.

No. It’s a good location, but [the entrance is] on a side street. You don’t see it from everywhere. I like for people to have to find it. Well, not too hard to find it.

How did Huevos come to be?

At my aunt’s place, everything was a caballo—“on horseback”—meaning it had a couple of fried eggs on it. Steak, rice, beans, you name it. I wanted to explore that [tradition] a bit more. There’s nothing to me that an egg doesn’t make better. There’s something comforting about it.

What will we see on the menu?

There will definitely be things we really love—bacon, egg and cheese empanadas; sweet and savory popovers with butter, in a bag to go. Different version of tortas— Cuban sandwiches—a caballo. I’d also like it to be a bit surprising. It’s called “Eggs,” but it’s not going to be all eggs. We’ll have a significant barbecue section where we’re doing our own beef ribs and brisket. I’m a huge fan of egg salad sandwiches, so maybe an egg salad club. Not everything will be Latin. [The idea is] something that tastes really good and travels really well, with a small cocktail component—maybe bloody marys and mimosas—and great coffee. I describe it as just a little egg shop. I want the chance to over-deliver on that.