These homeowners wanted to get out of the house for a little breathing room. But they didn't have to go far. 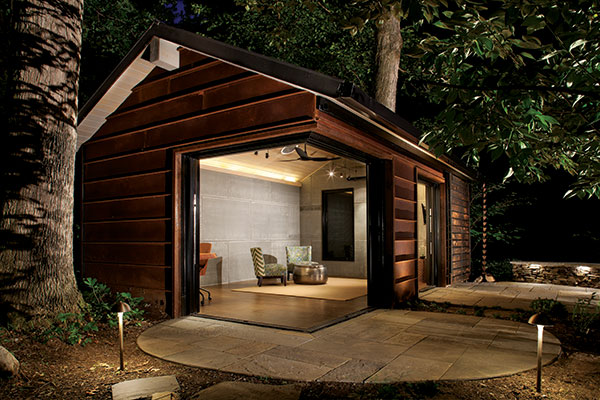 For 18 years, Carey and Beverly Johnston have lived in the same brick house in Arlington Forest, on a green quarter acre that backs up to Lubber Run. When the derecho of 2012 knocked down a large oak tree near the back of their lot—taking several others down with it—Beverly, a master gardener, saw an opportunity.

At her hand, the tidy backyard had already evolved into an oasis, complete with water features, visiting wildlife and full-size banana plants. After the storm, the newly cleared swath of land presented the perfect spot to build a stand-alone “garden room.”

Though the couple had been contemplating an accessory unit for some time, “It was a combination of the derecho and low interest rates that spurred the start of the garden room,” Carey explains.

Picturing a simple, rectangular building with views of the foliage, they commissioned drawings from McAllister Architects, based in Alexandria, and began shopping for a builder. Eventually they found themselves meeting with Mark Turner, owner of GreenSpur, a design-build firm based in Falls Church. 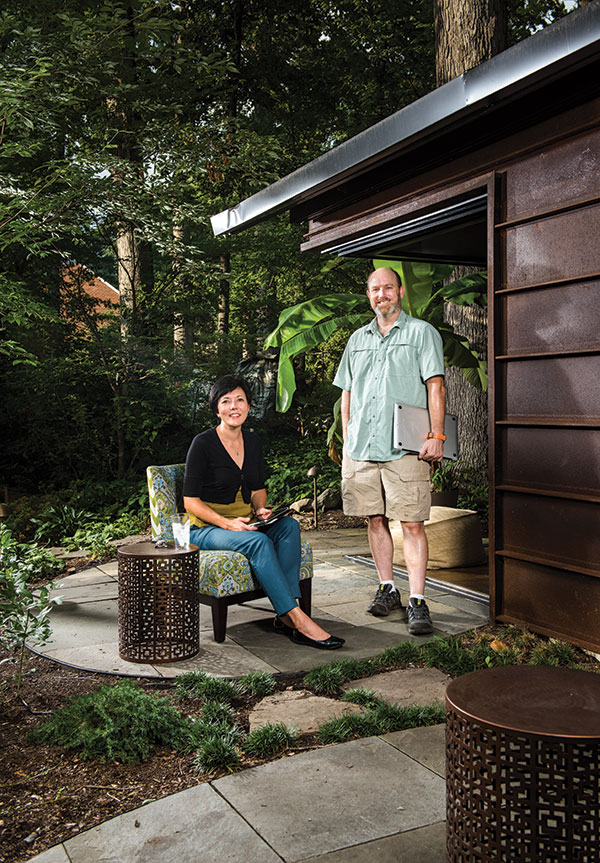 Beverly and Carey Johnston on the patio of their wooded hideaway. Photo by Darren Higgins (portrait)

Turner had experience constructing small outbuildings—little jewel-box structures that are more than a shed but less than a house—and felt like he had a handle on the concept they were after. “I think people want to be able to get away from the craziness of life,” he says. “I think it’s part of the genesis of the tiny house movement.”

To keep things simple, his plans for the 280-square-foot studio called for a pier foundation system and structural insulated panels (which eliminate the need for wood-frame construction).

The project became a bit more complicated when the Johnstons applied for a building permit. County planners were concerned about egress from the unit and the possibility that transporting materials back and forth to the construction site might damage the immediate ecosystem. (Their main worry was sediment runoff during rainstorms that could drain into Lubber Run.)

The work-around involved replacing cement trucks and cranes with wheelbarrows, which were restricted to a path of plywood running from the neighbor’s driveway to the back of the Johnstons’ property. Luckily, their neighbor was onboard with the plans. 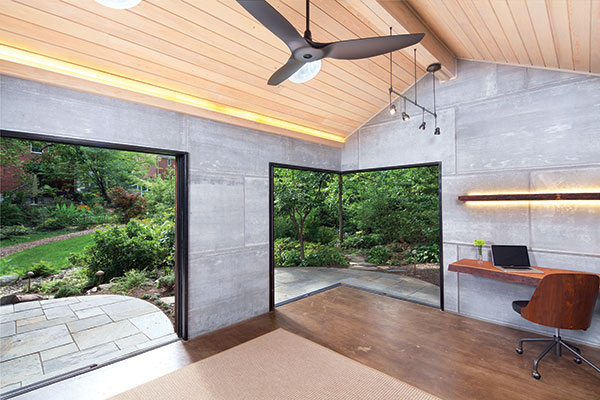 To give the retreat a weathered look, Turner added steel cladding to the exterior and sprayed it with what he calls “secret sauce,” a solvent that simultaneously protects it from the elements and gives it a rusted patina. Sliding screens made of cypress wood—tempered with fire to enhance the aesthetic—can be adjusted to control airflow and sunlight. Cypress is naturally resistant to insects, he explains, and select lumber suppliers now offer “charred siding,” a technique used by the Japanese for centuries to help protect the wood from bugs, sun and the elements.

Retractable sliding glass doors permit year-round views, and can be opened when the weather is cooperating.

Situated just a short stroll from the main house, the tiny retreat is heated and cooled with a wall-mounted, ductless HVAC system. It has no kitchen or bathroom, but it is equipped with TV, Internet and a solid oak work desk. Carey and Beverly like to use the space for teleworking (he works for the EPA and she is with the U.S. Agency for International Development). Their kids—Spencer, 15, and Bennett, 12—use it as a hangout.

“A lot of people ask us why we didn’t just add on to the house,” Carey says. “But we wanted a new living space that was out in the garden.” Who wouldn’t?