These vineyards are turning out some of the best wines in the state, and their settings are lovely. 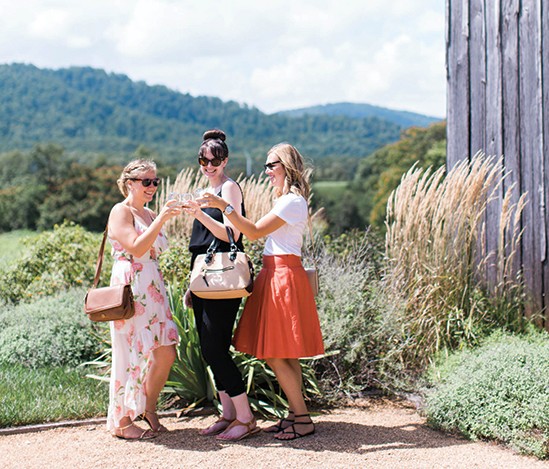 In 2012, Jean and Steve Case built Early Mountain as a love letter to Virginia. Situated in the foothills of the Blue Ridge in the tiny town of Madison (population 230), the venue itself is impressive, with indoor and outdoor spaces built to host everything from casual gatherings to large weddings and events.

But it’s Early Mountain’s “Best of Virginia” program that sets it apart: In addition to serving and selling wines from its namesake label (the rosé is a perennial favorite), the winery also pours a rotating selection of some of the state’s top sips. The roster frequently includes wines from other vineyards, including a top-notch bubbly from Virginia producer Thibaut-Janisson, a nebbiolo from Barboursville—the winery that helped put Virginia wine on the map—and cider from local favorite Foggy Ridge.

Another bonus is Early Mountain’s full-service kitchen, which offers typical vineyard fare, plus a menu of small plates, salads, sandwiches and desserts. This makes it easy to park yourself here for the long haul, whether it’s fireside with a good book or on a picnic blanket with your kids and dog.

Named for the property’s earliest known landowner (Revolutionary War veteran Lt. Joseph Early), Early Mountain is the most bustling of the five wineries listed here, but it’s also the most expansive. Social drinkers can buy tickets for the spring and fall oyster festivals, winemaker’s dinners and live music events, but all are welcome to visit year-round any day of the week except Tuesday. Tours are available by request, and tastings are offered at the bar for $10 per person. Thomas Jefferson may have introduced viniculture to the state of Virginia, but Linden’s Jim Law perfected it. The humble winemaker has been turning out consistently excellent wines for nearly 30 years—and generously educating visitors, as well as fellow winemakers who have gone on to produce their own noteworthy labels (more on that below).

While Law prefers to fly under the radar, Linden can’t help but attract the attention of oenophiles and critics. This has made it difficult to keep the crowds at bay, although the small, comfortable winery has its ways. Buses, parties of more than four and outside food are forbidden. Leashed dogs are allowed on the grounds, but they are not permitted in the winery or on the deck areas. Follow those rules and you can take full advantage of the in situ experience that Linden offers.

It’s worth arriving by 11:30 a.m. on weekends for the free, 30-minute tour. A $7 tasting in the main room showcases about a half-dozen of Linden’s most popular pours, but you won’t regret shelling out the $25 for an hour-long cellar tasting, which provides an in-depth education and a closer look at the terroirs of the three local plots of land where Linden’s grapes are grown.

Linden’s wine menu continually evolves to reflect soil and weather conditions. Among its nearly 20 current releases, you’ll find an array of reds—from an easy-drinking claret to other Bordeaux blends with aging potential—and some nice whites, including a crisp, Chablis-style “Avenius” chardonnay and several dessert wines.

Local cheeses and charcuterie are available for purchase on the small back porch (heated in winter, open-air in summer), where you can swirl and sip with glorious views of the Blue Ridge Mountains. On weekends, the porch is reserved for “Case Club” members—loyal customers who buy at least 12 bottles of wine each year. Summer visiting hours are 11 a.m. to 5 p.m., Friday through Sunday, but are subject to change seasonally. Named after owner Rutger de Vink, this boutique winery turned the Virginia wine industry on its ear when it emerged on the scene in 2011, offering Virginia’s first $100 bottle—a big red, eponymously named “RdV.” It was a bold move by de Vink, but wine critics from Robert Parker to Jancis Robinson agree that the wine has lived up to its price tag.

“We’ve made a wine that can stand on the same table as a wine from Médoc or Napa,” de Vink says. “I don’t want to put anything in a bottle unless I can knock it out of the park.”

RdV is intentionally situated on a gravelly hillock in Delaplane that offers growing conditions similar to those in Bordeaux. The vineyard grows four of the classic Bordeaux grapes—cabernet sauvignon, merlot, cabernet franc and petit verdot—which are painstaking blended into one of two wines. Lost Mountain, its cabernet sauvignon-dominant, age-worthy premier cru, currently sells for $125, whereas Rendezvous, a more accessible and critically beloved blend, retails for $75. (In addition, a small selection of RdV’s “Friends and Family” bottling—a delicious, highly drinkable table red—is available to mailing list members and restaurants for about $35.)

The grounds are magnificent, with a modern farmhouse, state-of-the-art facilities and pristine caves. But it’s the wine itself that has reshaped public perception of Virginia’s wine bona fides. At $50 per person for a tour and tasting, RdV caters to folks who are serious about understanding wine and the winemaking process. Reservations can book up weeks in advance, with a maximum of four people per party (no babies or kids). Guests receive a glass of Champagne (yes, the real stuff) upon arrival before touring the facilities and, weather permitting, the vines. The 90-minute tour culminates in a tasting of both Lost Mountain and Rendezvous wines with local cheese and charcuterie. Reservations are available Thursday through Sunday at 11 a.m., 1 p.m. and 3 p.m. In 1995, Jeff White planted the first grapevines on the 212-acre farm that had been in his family since 1901. But it wasn’t until 2008 (after spending 12 years apprenticing under Linden’s Jim Law) that White opened Glen Manor for business.

It’s hard to avoid feeling both grateful and grounded sipping wine in this narrow, protected valley on the western edge of the Blue Ridge. Situated about 12 miles south of Front Royal, White’s operation is low-key with a relaxed vibe. Buses and large parties are prohibited, but groups of up to six people are welcome at the small tasting room’s main bar. The winery doesn’t sell food; however, you are welcome to bring a picnic to enjoy on the rolling lawn. Pets are permitted outdoors.

Glen Manor’s wines are standouts—similar to Linden’s in quality and minimalist style—and are often featured on wine lists at top-tier D.C.-area restaurants such as Proof and Restaurant Eve. Among the half-dozen wines that are currently offered, you’ll find a picnic-perfect rosé, a sauvignon blanc that’s consistently ranked among the best in Virginia and a critically acclaimed Bordeaux-style red called Hodder Hill.

“We’re very hands-on in the vineyard, so there’s very little to do once they’re in the winery,” White says of his overarching approach to winemaking. “Nothing is added to our wines—just grapes, yeast and barrels. Everything you taste is a reflection of the earth where it’s grown.”

From April to November the winery is open for tastings (fee ranges from $4 to $12 per person, depending on the wines offered) from 11 a.m. to 5 p.m. Wednesday to Saturday, and noon to 5 p.m. on Sunday. Virginia makes a pinot noir—and it is excellent. Surprised? So is everyone else. “We definitely went out on a limb, because it’s always been thought that pinot noir couldn’t be grown in Virginia,” Ankida Ridge owner Christine Vrooman says of the notoriously finicky grape. But after Vrooman and her husband, Dennis, came to own this small patch of land about an hour south of Charlottesville, they discovered that the protected, convex slope, moderate temperatures and rocky granite soil mimicked the growing conditions in Burgundy, France—home to some of the world’s best pinot noir.

So they planted two acres of vines in 2008 and released their first vintage in 2011. Now, at $44 a bottle, their pinot noir (made by their winemaker and son, Nathan) is a favorite among wine lovers and critics coast to coast, and recently found its way onto the menu of Fish by José Andrés at the MGM National Harbor. Ankida Ridge also makes a highly acclaimed—and similarly Burgundian—chardonnay, as well as a handful of other wines, including a sparkling crémant that will be released in the next year.

Drive the winding country roads to the small, private winery—whose name, derived from ancient Sumerian, means “where heaven and earth join” —and you can sample wines in the tasting room for $10 per person. Tours are available by reservation. Dogs, sheep and chickens roam the property, chasing away pests and cleaning up after the harvest.

Ankida Ridge offers a cheese plate for purchase and brings food trucks on location for seasonal events, but guests also are welcome to bring their own snacks. Bachelorette parties and busloads of people are discouraged (“It hurts me to pour our wines for people who are just looking to get drunk,” Vrooman says), though the winery does host occasional events that are open to the public. In warm months, it’s open on Saturdays from noon to 5 p.m. Check the website for winter hours.