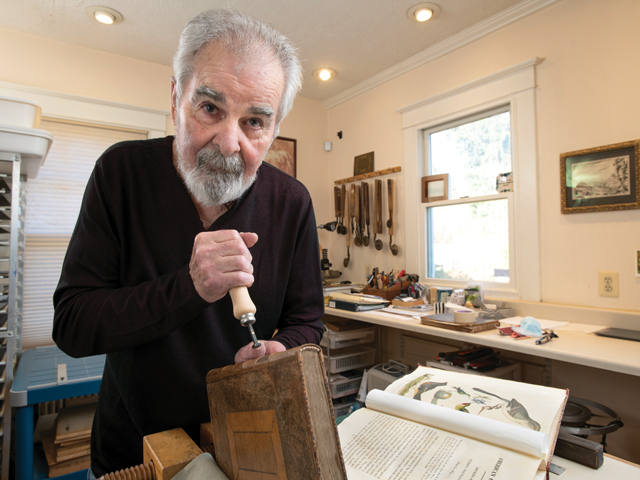 Book Conservator Tom Albro seems puzzled as to why his profession might be considered interesting. Yet there are few people on Earth who can tell firsthand stories about working to preserve George Washington’s diaries, Thomas Jefferson’s vast library, 12th-century documents and music manuscripts from the likes of Brahms, Beethoven or Bach.

If it weren’t for an article he saw in the early ’70s highlighting paper conservation at the Smithsonian Institution, Albro’s 28-year career at the Library of Congress might never have come to pass. Back then, he was driving a taxicab to put himself through school at American University, where he studied history.

“I didn’t even know that this field existed,” says the Arlington resident.

He was intrigued and wrote a letter inquiring whether the Smithsonian offered any sort of apprenticeship program.

“They didn’t,” he explains, “but they referred me to the Library of Congress, where a group of English bookbinders had been hired…to set up a training program in book conservation and paper conservation. I was fortunate enough to stumble into it.”

One of Albro’s favorite professional memories is when the library came into possession of the contents of President Lincoln’s pockets the night he was assassinated. “This was not something that required restoration but required boxing and rehousing,” he says. “That was quite a thrill.” (In case you’re wondering, the collection included a pocket knife, a handkerchief, a $5 Confederate note and several elaborately folded newspaper clippings.)

When it comes to book restoration, Albro says it’s tough to choose a favorite project, although working on George Washington’s diaries was a definite career highlight.

“Those are interesting because they’re both dramatic and mundane, in the sense that George was very much the farmer. He was really concerned about the affairs on the farm…especially when he was away as general of the armies in the revolution,” Albro says. “It’s amusing to think of him basically helping to construct the origin of the United States of America at the same time as he’s worried about the peaches and the wheat. I just think that humanizes him very, very dramatically.”

Albro’s time at the Library of Congress wasn’t solely significant for his professional achievements. He also met his wife, Sylvia, there. “She restores prints and drawings, art on paper, that sort of thing.”

He retired from his career position in 2000 and now works independently with institutions, collectors—anyone who needs professional bookbinding and restoration.

“The large majority [of commissions] are from collectors of fairly big-ticket items and institutions in the area,” he says of his freelance work. “The Library of Congress does have a conservation division, the National Gallery does and National Archives does, but there are places that don’t have the conservation services available, and so a lot of that comes in my direction.”

He says projects can vary wildly, taking anywhere from a few hours to 500, with fees ranging from several hundred dollars to around $5,000—“depending on how much damage there is, how big the book is and what the requirements of its restoration are.”

Tools of the trade include a bone folder—an implement formerly made of bone but now frequently made of Teflon—used for smoothing surfaces and folding fragile materials without leaving a mark. He also employs scalpels, tweezers, rulers and paring knives in his restoration work, and relies on Japanese paper and wheat starch paste to repair tears.

He says book lovers can protect their most prized volumes by keeping humidity levels in the 50% range, shielding books from direct sunlight and avoiding temperature fluctuations. But he recognizes that maintaining those conditions isn’t always possible. In some cases, natural disasters can make his work particularly challenging.

“If something’s been in a flood and laying in water for days or weeks, that’s probably going to be mush and not really able to be salvaged,” he says. “A book can come to [me] in a form in which the original material—the covers and everything—are basically not able to be used anymore. That doesn’t happen that often, maybe 5% of the time.”

For the most part, though, his years on the job have prepared him for just about any restoration hurdle one could dream up—including making a book from 1531 look as good as new.

“What I do is restore books to look pretty much the way they did when they were first bound,” he says. “That’s the interest of the collectors and the institutions.”

Rina Rapuano is a food, travel and features writer based in Washington, D.C. Find her online at @rinacucina (Instagram) and @rinarap (Twitter).