How co-owner Nathan Hatfield got his start. And what's in the oven now. 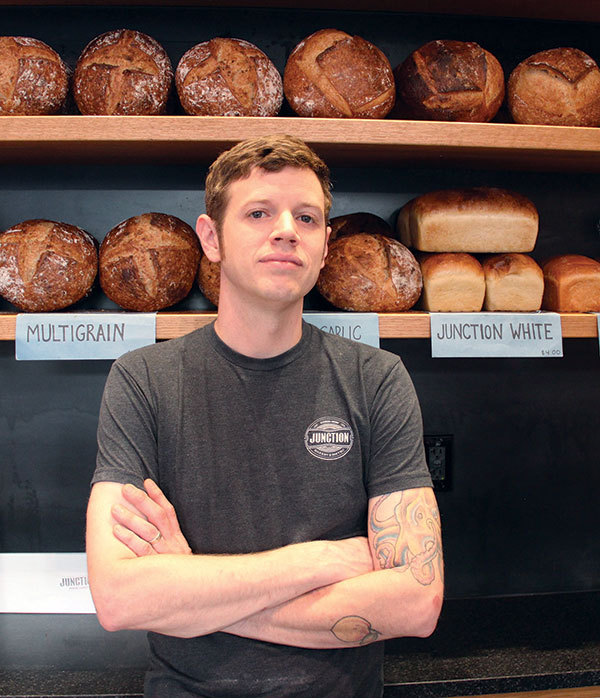 Nathan Hatfield got his start in the restaurant business like many chefs—he fell into it. The Fort Worth, Texas, native was working as a dishwasher in a New England eatery when its baker left. That’s when Hatfield, now 36, said bye-bye to college. By 2003 he was in Alexandria, where he spent the next nine years working for chef Cathal Armstrong—first at Restaurant Eve, and then at the market café Society Fair, where folks couldn’t get enough of Hatfield’s fruit-and-nut bread, pullman loaf (sandwich bread) and brioche. Most recently, Hatfield spent two years at Le Diplomate in the District before opening Junction Bakery & Bistro in Del Ray, in July, with restaurateur Noe Landini. www.junctionbakery.com

Who taught you the most about baking?

Master baker Jeffrey Hamelman in Norwich, Vermont. He’s the bakery director for King Arthur Flour. I took classes with him. The rest was just me messing up a whole lot of bread.
How did the dream of your own bakery become a reality?

My friend Tami [Hatridge, Junction Bakery’s general manager] was a bartender at Landini Brothers restaurant in Alexandria. Noe Landini told her he was thinking about opening a bakery so he could get bread for his places at a good price. We were introduced in the fall of 2015 and we had a piece of property by Christmas.

Long and early. I get there at 3 a.m. and start mixing and baking bread. At around 2 p.m., I transition into my chef job and start prepping for dinner.

What was the hardest thing to perfect?

Baguettes were the hardest—to get the shaping, scoring and crumb to coincide. It’s a tricky, tricky bread that likes to show you your mistakes at every turn.

Which items are the biggest sellers at Junction?

Classic and country breakfast sandwiches, and all the croissants.

What’s the most decadent thing on the menu?

The chocolate cake with hazelnut buttercream. It’s a super-moist chocolate cake. I got the recipe from the very first place I worked when I was in college.

Some Yelp reviews have complained about the prices.

They are unforgiving, but I’ve learned to ignore them. I take it with a grain of salt. People looking for a bargain or discount food have gone elsewhere. People who like quality have found us.