Why Applebee's is Coming to Ballston

The national chain is set to open on North Glebe Road on June 11. And not everyone is happy about it. 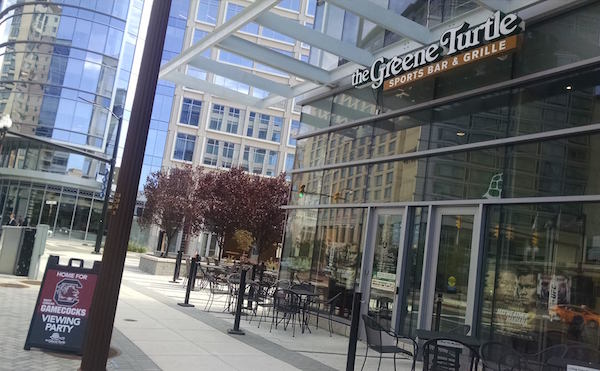 The former Ballston Greene Turtle space will soon be home to an Applebee's. Photo via facebook.com/greeneturtlearlington

Keeping up with Ballston’s ever-changing dining scene is no easy task. The neighborhood has seen significant turnover in recent years, with an influx of chef-driven newcomers such as Kapnos Taverna, Yona, Mussel Bar and SER moving in alongside popular D.C.-area chainlets like Taylor Gourmet and the latest expansion of the homegrown cheese emporium Cheesetique.

But all of that change has left some local residents scratching their heads over the latest addition to the landscape: Applebee’s.

The national restaurant chain is set to open a Ballston location in the former Greene Turtle space at 900 N. Glebe Road in Ballston as early as June 11, according to an Applebee’s spokesman.

Granted, it won’t be your average Applebee’s. The restaurant—which will occupy the ground floor of a 144,000 square-foot building owned by the Virginia Tech Foundation and anchored by Arlington’s Virginia Tech Research Center—will sport a new, urban-focused design, says Applebee’s spokesperson Steve Coe. It will be the third Applebee’s in the U.S. to experiment with the new look.

The design will also put more emphasis on the bar, Coe says, noting that the restaurant’s beer selection will feature 16 brews on tap, four of which will be local craft beers.

“The [Ballston] location was very attractive [to Applebee’s] for a number of reasons,” Coe says. “There are lot of Millennials in the area, and it’s an area that has a lot of office buildings as well as residential. The fact that the restaurant will be in the ground floor of a mixed-use building [was also appealing].”

According to the Ballston Business Improvement District (BID), Ballston claims just under 76,000 residents within a five-minute drive of the new Applebee’s location, and the average household income is $139,715. Twenty-nine percent of those residents are between the ages of 25 and 34.

Applebee’s is far from the first national chain to lock in on Ballston—Buffalo Wild Wings, P.F. Chang’s, Starbucks and Chipotle are all within a short walk—but when news broke about the forthcoming Applebee’s in early May, some residents weren’t thrilled.

“I think everyone let out a collective groan,” says Waycroft-Woodlawn resident Mike Kane, who has lived in the area for 11 years. He says he often walks with his family to local restaurants like Mussel Bar in Ballston and Whitlow’s in Clarendon.

“I work in Maryland … and I’m always having to defend Arlington as an exciting place,” Kane says. “And then you have [Applebee’s] move in and just prove their point. It screams flavorless suburb.”

When the news broke in early April that Applebee’s had set its sights on Ballston, commenters on the local dining message board of DonRockwell.com were swift to voice their disapproval.

“I don't like what it says about my neighborhood that Applebee’s is moving in,” one poster wrote. “I hope it closes soon too.”

But Ballston BID CEO Tina Leone says the Applebee’s move is an indication that the neighborhood is an attractive market.

“I knew [Ballston] was good, but the confirmation of that was last May when I went to the shopping center convention in Las Vegas,” Leone says. “We are being eyed and able to attract national attention.”

“While there may be some nationals in the mix, it is not the focus of our leasing strategy,” McManus says.

Construction on the mall project—which is located roughly two blocks south of the new Applebee’s—will begin this summer, with an anticipated completion date in 2018. Some letters of intent have already been signed for Ballston Quarter, but McManus says it is too early for participating restaurateurs to go public.

Ballston has seen heavy restaurant turnover in the past two years, and the area remains in flux. By the time longtime favorite Willow closed its doors on Fairfax Drive in September 2015, the neighborhood—one of the larger stops along Metro’s Orange Line corridor—had seen five other restaurants close in a little more than a year.

At the time, Willow’s operations chief Brian Wolken told Arlington Magazine that the restaurant had been unable to negotiate a new, affordable lease with its landlords amid increasing rents in the neighborhood.

And for now, those real estate prices show no signs of abating. Marc McCauley, director of real estate development for Arlington Economic Development, says that while chef-driven concepts have done well in Ballston, large retail spaces—like those on the west side of Glebe Road where Applebee’s will open—often demand established tenants with deep pockets who can shoulder the rent.

“We still see a very strong demand for these spaces from larger credit tenants because the spaces are larger,” McCauley says. “They are a proven model and know they can pay the rent and fill the seats.”

At the same time, McCauley points to the recent arrival of Cheesetique—which has set up shop in the former Pizza Vinoteca space on the west side of Glebe Road—as an indication that local and national chains can coexist in the area.

And what of the complaints that Ballston’s restaurant scene is over-saturated? McCauley says the market will likely play itself out and find a balance.

With a revitalized Ballston Quarter promising to bring more high-end retailers to the neighborhood, McCauley anticipates that Ballston will continue to grow in popularity as a dining destination, drawing diners from beyond Arlington to help fill seats.

Leone says she’s excited to see Ballston Quarter going after national chains as well as independent boutiques and restaurants. She says balance is important, and anticipates that the mix of national and local will appeal to a wider variety of patrons.

“I know there are some people who were rolling their eyes with Applebee’s, but it serves another part of our constituency,” Leone says.  “It serves the families and they cater to seniors as well … I’m eager to see how the new urban concept looks.”

Once its space renovations are complete, the Ballston Applebee’s will include seating for 240 in the main dining room, plus 20 bar stools, a patio area and a back room for special events.