And that touched a nerve, considering Halls Hill, during the Jim Crow era, had an actual “segregation” wall separating it from what was then the white neighborhood of Waycroft-Woodlawn. When Killgo was born in 1959, residents of her neighborhood weren’t allowed to use the hospital in their own backyard. That history of discrimination has seeded some ill will, she says. It didn’t help that the hospital also put medical waste containers—an eyesore—on the North Edison side facing High View Park.

“They let us know with their design that they don’t care,” she says. “I just want it to look as nice for my side as the other. Why should you allow one side of a property to be designed welcoming to a neighborhood and the other side is not welcoming? Arlington is changing. I can’t fight change. All I can ask for is fairness.”

Stanton concedes the hospital “fell short” on the waste container issue and is fixing it. But on the larger matter of lot orientation and aesthetics, the hospital is in a bind. Residents of High View Park pushed for twice as much distance from the street, even though the 50-foot setback on most sections of the Edison property is already double what the county requires.

“I get that people would like more,” he says. “But we’ve got 5 acres of land that we’ve got to maximize. This could be the last property we get for the long-term future of the hospital. This is it for us for the next 50 years.”

To smooth the transition from neighborhoods to medical campus, the hospital’s new complex is designed with two stories on the perimeter and then gradually tapers up, with the tallest structures (80 feet) placed the farthest possible distance away from the nearest houses—about the same distance as the tower on the existing hospital property. 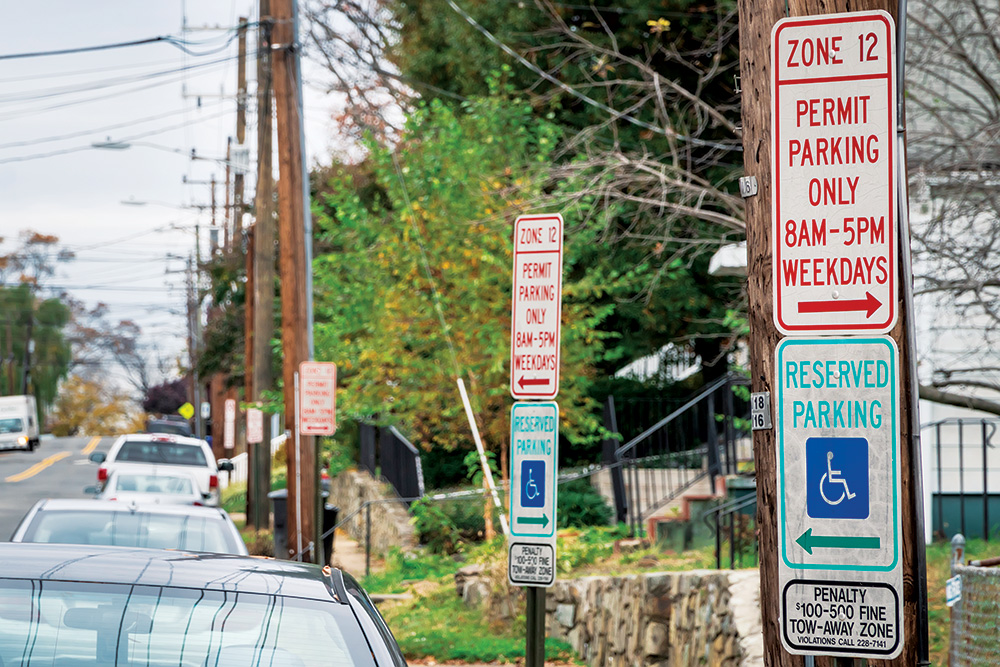 Street parking in Arlington can be tough to find. Photo by Thom Goertel.

Parking has been another sticking point. A new garage structure will contain roughly 1,700 new spaces for patients and visitors as well as employees who are currently parking in satellite lots. Hiring and retaining top-quality staff is harder, Stanton says, when employees have to take shuttles that add 20 to 40 minutes to their commuting times. Plus, the leases on those satellite lots could soon be lost, given the demand for buildable land in Arlington.

The latest iteration of the parking garage is smaller than the one originally proposed, with two to three levels below grade. Neighbors like Judah had hoped it would be completely underground, but Stanton says that kind of excavation would triple the cost and add another $50 million to what’s already an $80 million project. The hospital board felt “that’s not the right use of the money. That money should be spent on patient care,” he says.

The hospital has also found itself sparring with county planners. Jane Siegel, who chairs the Arlington Planning Commission, says the garage could have been designed more efficiently by putting parking spaces on the ramps between levels. “How do you balance the need of [the hospital] versus the need of the neighborhood? In Arlington, people park on ramps,” she says. “To privilege the experience of the parking public over the need of the neighborhood, I felt the wrong balance was drawn.”

Stanton counters that parking on ramps is “dangerous with respect to people exiting parked cars”—especially now that the parking ramps have been redesigned to be narrower and steeper in order to free up space outside of the garage for wider setbacks. “It’s like a balloon,” he says. “When you squeeze on one part, it creates issues elsewhere.”

In late November, the Arlington County Board narrowly approved the hospital’s revised plan by a vote of 3-2, giving it the green light to move forward. Stanton says the hospital will begin offering a $50-per-month incentive to employees who take mass transit, bike or find other alternatives to driving to lessen the impact of cars.