When it comes to what we eat, it’s all about balance, right? For a food columnist and restaurant critic, that can be tough—especially when assignments require slogging through 40 or 50 pizzas, or nailing down exactly which chili relleno is the gooiest in town. My solution? Whenever I can, I trade sauce for broth, choose superfoods over supersize and ditch the knish for fish. And by the way, eating healthy doesn’t have to mean eating in. Here are some not-so-guilty pleasures to try the next time you feel like going out. 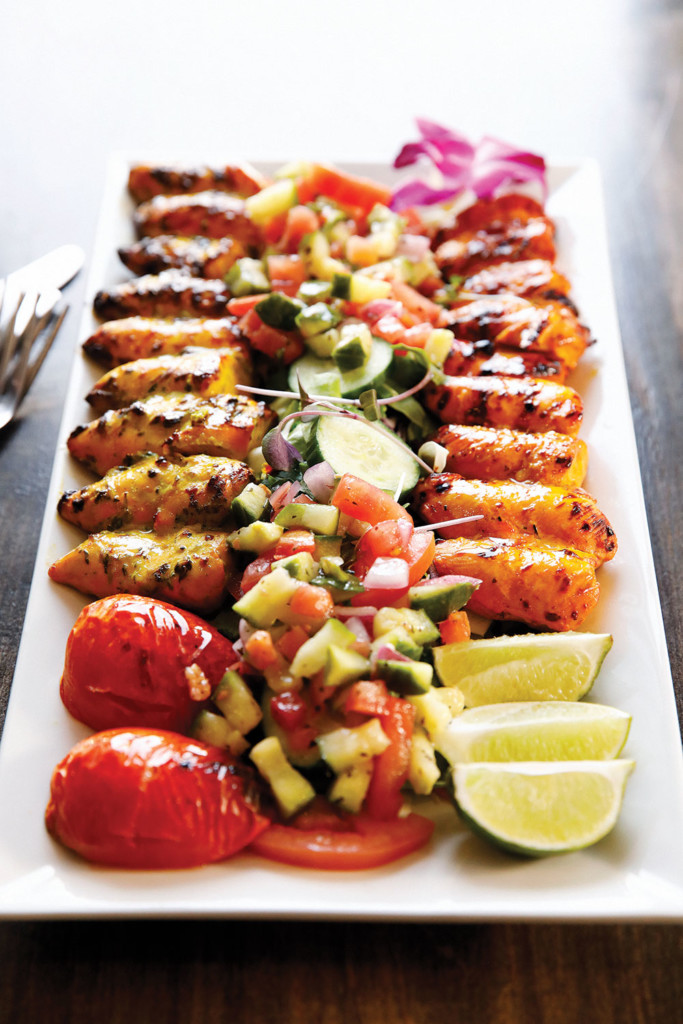 No one could ever accuse Seb Oveysi, the chef and owner of Amoo’s Restaurant, of being a jerk. But he’s definitely on board with the jerk concept. During a 2016 trip to Jamaica, he asked a taxi driver to take him for some great local food, and they wound up at a roadside stand. “This is the best jerk chicken in Montego Bay,” the driver swore. One bite and Oveysi was convinced. He talked the cook into giving up the recipe for a cool $100.

For Amoo’s interpretation of the dish, Oveysi marinates thick chunks of chicken breast with pineapple, guava, Scotch bonnet and habañero peppers, smoked paprika, cumin, cloves, thyme, onion, soy sauce and a touch of brown sugar. He then grills the skewers to succulence, basting them with saffron butter, and serves them with grilled tomato.

If you’re feeling especially virtuous, you can forgo the side of saffron rice and double up on mixed greens with an herb dressing. For extra zest, dab the chicken in the restaurant’s signature chimichurri, made with jalapeño, cilantro, parsley and lime juice. 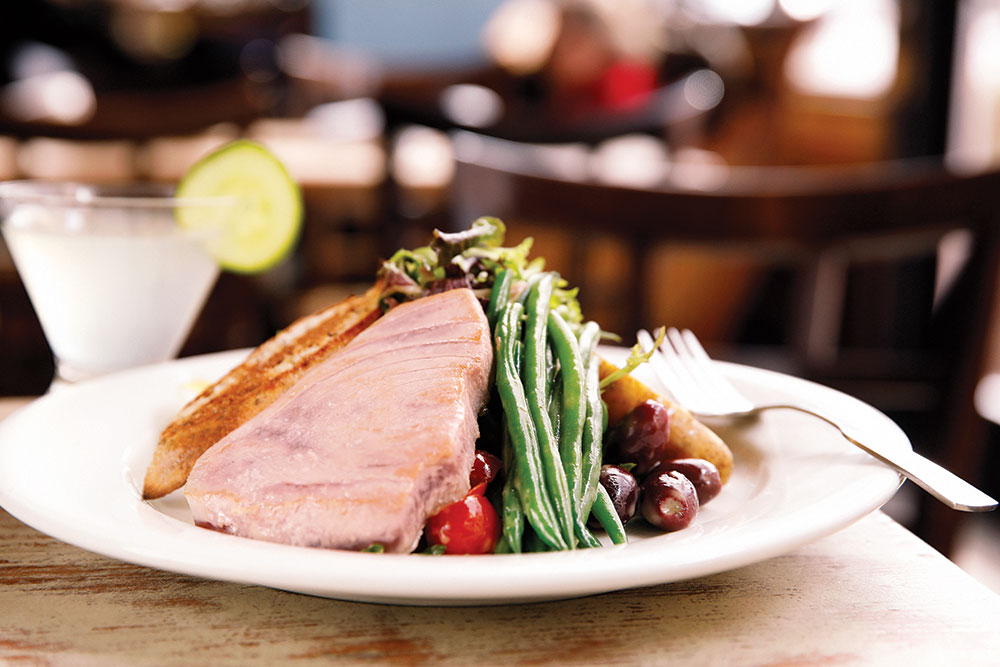 “Oh my God, what is that?” gasped the woman next to me, eyeballing my lunch at the bar of Busboys and Poets in Shirlington.

“The Niçoise salad,” I responded.

This pescatarian ensemble is a standout on a menu that also features loads of options for vegans and vegetarians. The star of the plate—a large slab of seared tuna, marinated in rosemary and olive oil—is propped up against a mound of mixed greens (red leaf and chicory) dressed with a lemony vinaigrette. Add to that the standard accompaniments of this classic French Mediterranean specialty: hard-boiled egg, fingerling potatoes, cherry tomatoes, black Niçoise olives and blanched green beans with just the right amount of crunch.

Founded in 2005 by restaurateur, activist and artist Andy Shallal, this local chainlet now has seven D.C.-area locations, each of which is part bookstore, bar, bistro and performance space. The menu describes it as “a place to take a deliberative pause and feed your mind, body and soul” and the atmosphere delivers. Eating a terrific salad, surrounded by books, in a place named after Langston Hughes (who, before he became a poet, worked as a busboy at D.C.’s Wardman Park Hotel in the 1920s) is my idea of a satisfying meal. 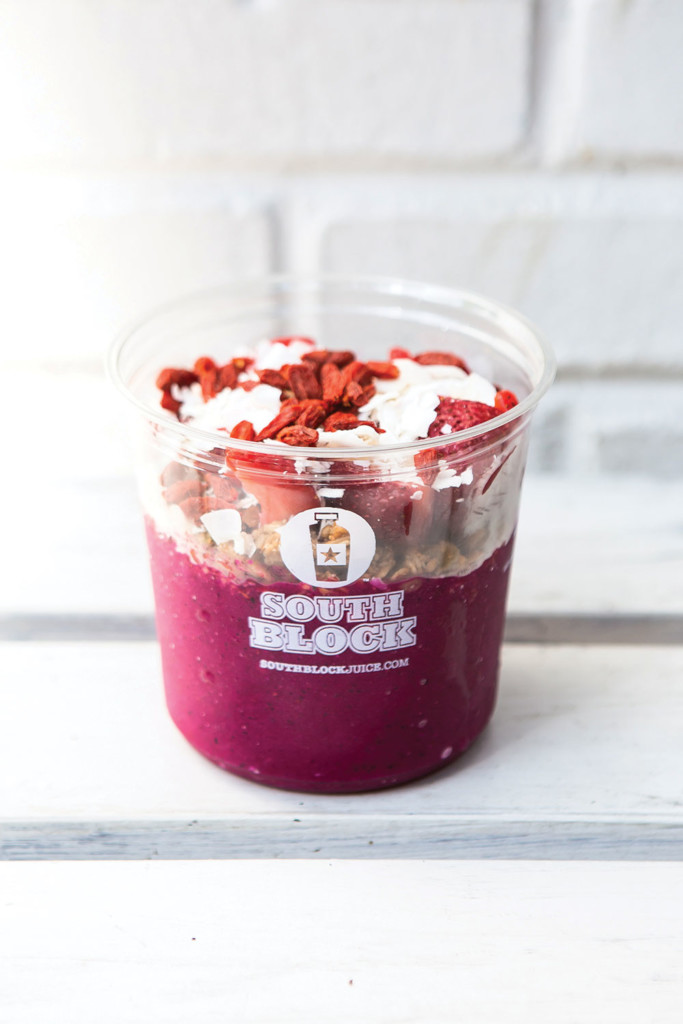 If Amir Mostafavi had gazed into a crystal ball in 2004, he might have heard a mystic whispering to him: Açaí a bright future in stores for you! (See what I did there?) That’s when the former graphic designer, inspired by visits to Southern California, launched his first juice bar, Campus Fresh, at George Washington University in the District. “This area needed a vibe that made you feel good,” says the entrepreneur, who was born in Iran and grew up in McLean. “It’s colorful, smells good and is good for you.”

By 2011, Mostafavi had his sights set on Arlington and took a small space in the South Block building in Clarendon, changing the name of his business accordingly. South Block offers a simple menu of smoothies and bowls, including an açaí (which, for the uninitiated, is pronounced ah-sah-ee) bowl made with a purée of imported Brazilian açaí, a superfood berry. My favorite option, however, features another superfood—pitaya (aka dragon fruit)—if for no other reason than the exotic fruit’s alluring magenta hue. For the Magic Dragon bowl, the pitaya purée is whirled into a sorbet-like consistency with coconut water, agave, strawberries and mangoes, then topped with granola, shaved coconut, goji berries and strawberries. In April, South Block unveiled a new storefront in Ballston Quarter. A 10th location opens in Rosslyn this summer. 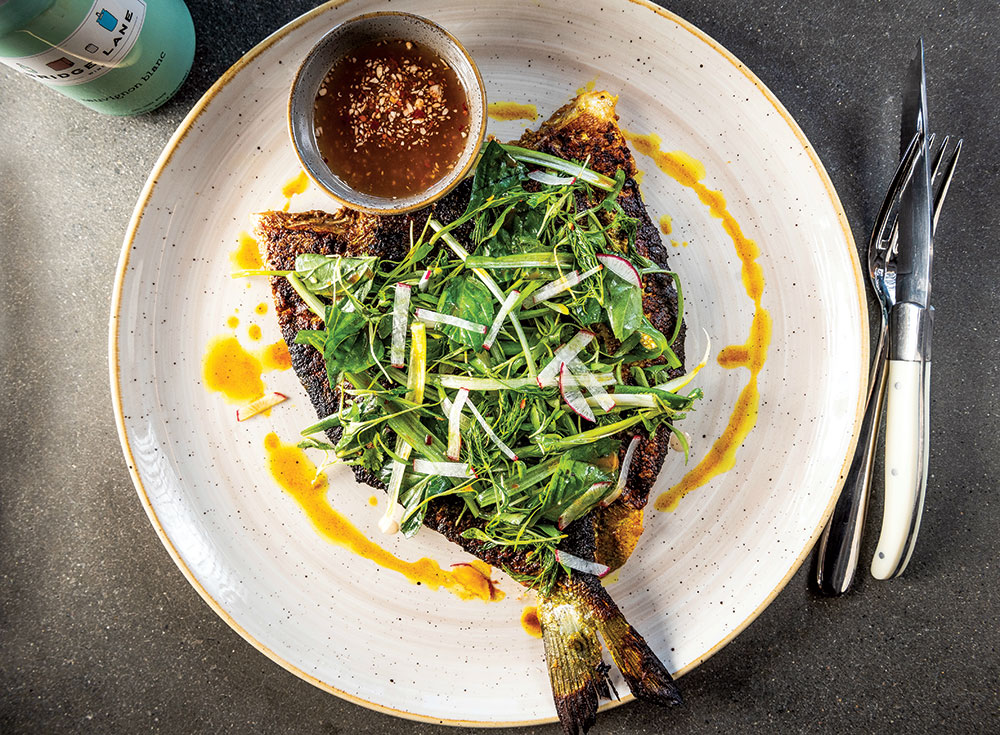 Truth be told, you stand a much better chance of luring me to a gym if it includes a spa and a restaurant helmed by celebrity chef Spike Mendelsohn. That’s how I ended up at The St. James, a massive (450,000 square feet) sports, entertainment and wellness complex that opened in September in Springfield. What exactly led Mendelsohn to this shiny new destination in an otherwise bleak industrial park? He liked the idea of blending his public policy advocacy—on issues such as making school lunches more healthful—with his restaurant entrepreneurship.

The menu at Vim & Victor, his 140-seat restaurant just inside the front entrance to The St. James, features what the chef calls “healthy-ish” cooking. Translation: You can still get a sloppy cheeseburger if you want one, but the nachos come loaded with cauliflower.

The dish that truly wowed me is a whole boneless, butterflied branzino (head removed) marinated in ginger, lemongrass, turmeric and lime leaf, then pan-seared, roasted and served crispy-skin-side-up with heaps of scallions and fresh dill. A side of nuoc mam, a Vietnamese dipping sauce made with fish sauce, lime juice and sugar, complements the branzino with a touch of tang, funk and sweetness. 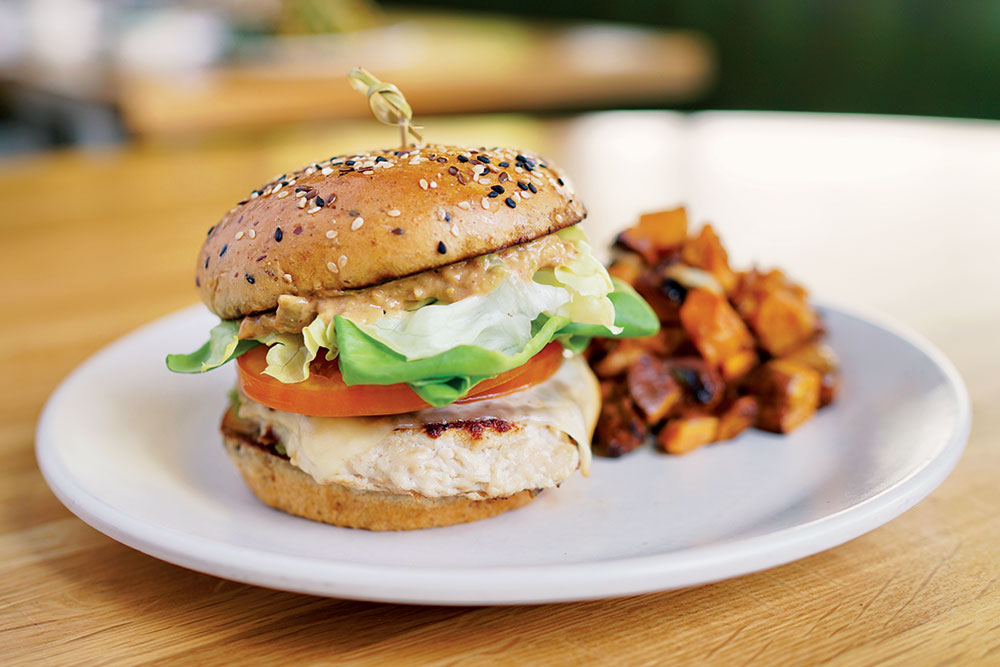 In July 2018, Oprah Winfrey became an equity investor in True Food Kitchen, a restaurant chain with 26 locations in 11 states, where the menus are based on health-and-wellness guru Andrew Weil’s anti-inflammatory diet pyramid. Dishes here, listed with calorie counts, are forward on vegetables, fruits, grains and legumes, with proteins and healthy fats represented more modestly.

Perched on a toasted flax-seed bun, the patty is nicely seasoned and tastes like pure poultry rather than fillers. It’s dressed with smashed avocado, smoked Gouda cheese, jalapeño remoulade, butter lettuce and sliced tomato. In lieu of french fries, it comes with a kale salad, lightly dressed in a lemon vinaigrette, and sweet potato hash. Clocking in at 690 calories, it’s an indulgence you can live with. 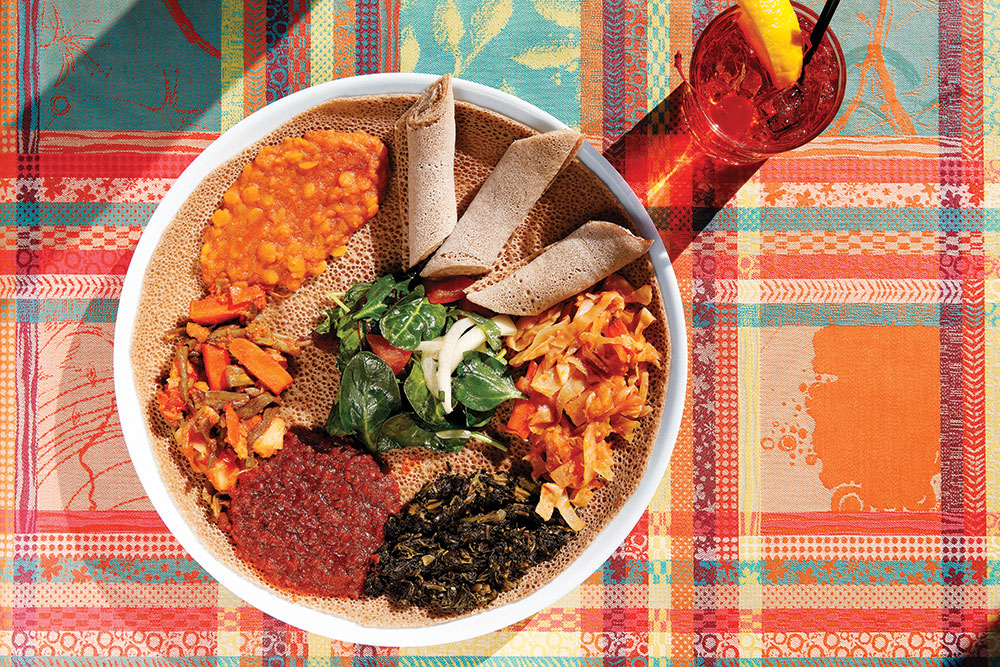 As an avowed carnivore, I like to convince myself that I’m being “good” whenever I choose vegetarian. My go-to places to do that are Indian and Ethiopian restaurants, because they are known for meatless dishes with bold flavors.

One such establishment, on Crystal City’s neighborly 23rd Street strip, is named after a staple of Ethiopian cooking. Enjera (or injera) is a spongy, porous sourdough flatbread made from teff flour (teff is a superfood grain) and wheat flour. You’ll usually find a large round of it serving as the base for whatever entrées and sides you order. Here, the vegetarian combo begins with misir wot, a thick, adobe-colored stew of red lentils, onions and ginger that brings the heat with the addition of berbere spices. Joining it on top of that flatbread are several mounds of other flavorful dishes: a mild yellow lentil stew (kik alicha); chopped collard greens (gomen); sautéed cabbage, potatoes and carrots (atakilt wot); gingery sautéed green beans and carrots (fasolia); and a mixed-green salad with a light vinaigrette.

It’s customary to rip off pieces of enjera and use them to scoop up the various stews and salads, eating everything by hand. But I use a fork to keep my lack of dexterity from requiring a post-meal manicure. Also, I’m left-handed, and using that hand is considered unclean in Ethiopian culture. 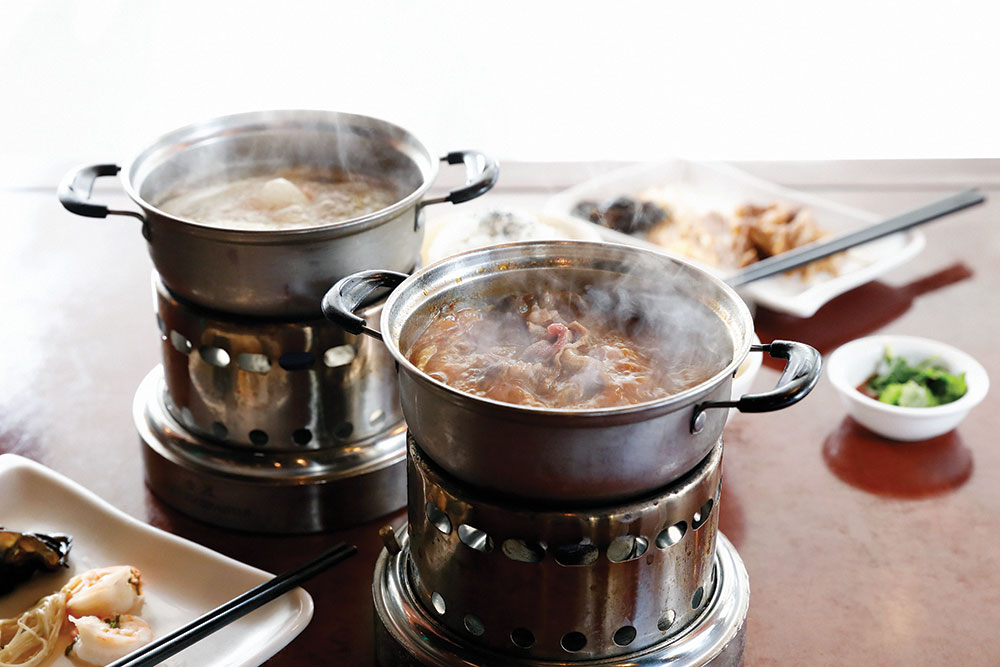 Sichuan chef Liu Chaosheng has built a mini empire in Virginia and Maryland (Hong Kong Palace, Uncle Liu’s Hot Pot, China Jade, Asian Origin) and I’ve been a fan of his Mala Tang restaurant ever since it opened in 2011.

Admittedly, when I’m trying to stay on the dietary straight and narrow, it takes sheer force of will to bypass the chef’s fried Chengdu beef dumplings, Sichuan wontons in hot oil, and dan dan noodles. But I persevere. Hot pot, another Sichuan specialty, presents a more virtuous option that’s quite simple. You order a pot of bubbling broth, either mild or mala (the latter, which means “hot and numbing,” is flavored with Sichuan peppercorns, “facing heaven” chili peppers, scallions and ginger) and then choose various proteins and vegetables to dip and cook in the broth. I’m partial to the surf-and-turf combo of raw sirloin and slices of raw sea scallop, plus Chinese veggies such as wood ear and enoki mushrooms and Napa cabbage. But the menu has an array of choices.

At the end of the dip fest, is a bonus: You are left with a lavishly flavorful—and, aside from a touch of hot chili oil, guilt-free—slurp-worthy broth, made even tastier by the things you’ve just cooked in it. 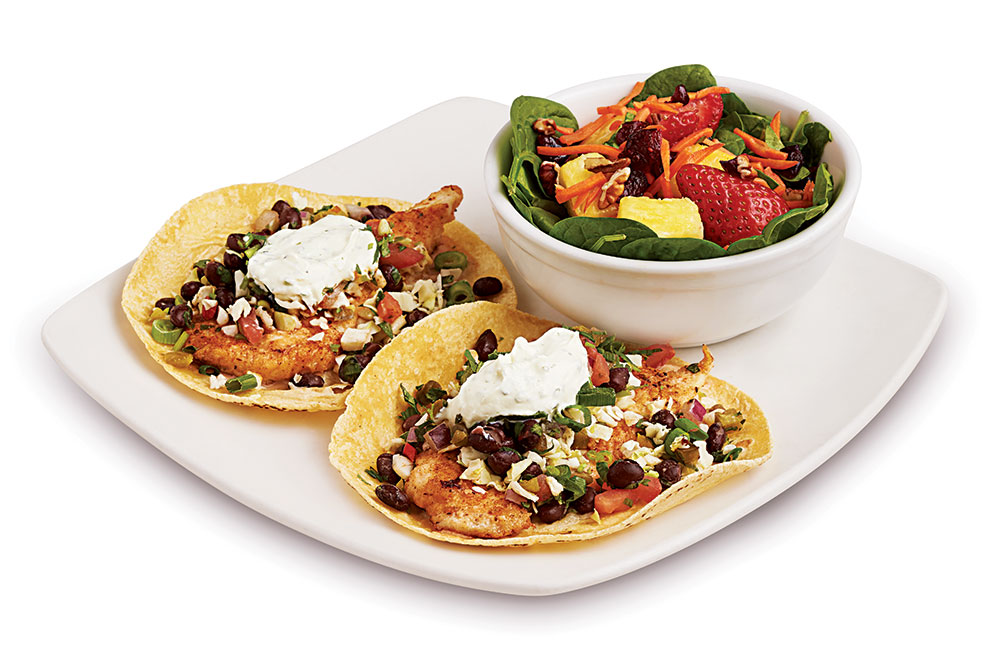 One of their winningest ideas came 10 years ago when they added an “Under 600 Calorie” section to the menu. “We thought [it] would appeal to older diners, but moms and families love it, too,” Von Hengst says, noting that those dishes, plus the diner’s plant-based options, now account for 10 to 12 percent of sales.

My eyes went right to the fish tacos, which come two to a portion with a colorful side salad of fresh pineapple and strawberries, pecans, spinach leaves, carrots and dried cranberries. Each warm corn tortilla is topped with a fillet of fresh California sole (grilled or fried—I love the grilled option), shredded cabbage, cilantro, scallions, Oaxaca black-bean salsa and a dollop of cilantro sour cream. (Pro tip: Add some salt and hot sauce.)

Scarf those down and you’ll still feel great afterward. But good luck resisting temptation as you leaf through the restaurant’s enticing menu of milkshakes and classic diner desserts. 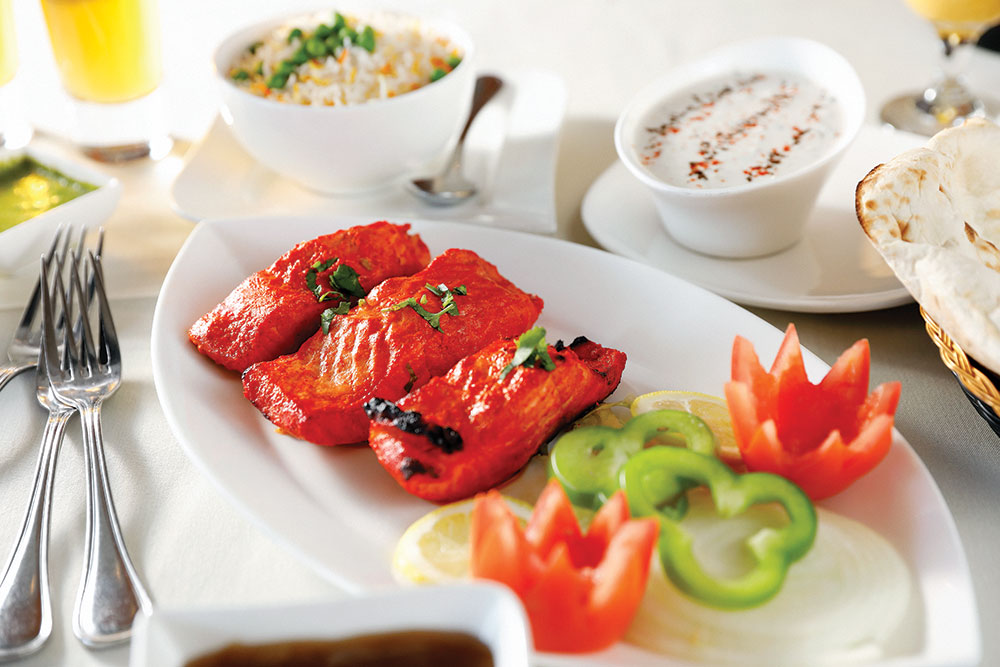 Indian cooking relies heavily on vegetables and legumes (lentils, beans, chickpeas, peas), but just because a dish is vegetarian doesn’t mean it’s light. Many of the offerings—curries especially—contain goodly amounts of cream and ghee, and you can quickly hit your caloric limit with carb-heavy legumes.

Instead, look to the tandoor, the high-heat clay oven that sears and roasts proteins to delectability. (The same oven bakes those lovely Indian naans you won’t be having!)

At Haandi, the salmon masala tandoori is the way to go. Chunks of fish—rendered bright red from a marinade of yogurt, vinegar, ginger, garlic, chili powder, cumin and coriander—arrive at the table on a sizzling platter, with a bed of sautéed onions and green peppers. It’s an enormous portion (ample enough for two, or good for leftovers) served with two chutneys—cilantro-lime and date—for even bolder flavor boosts. Be sure to order a side of cool raita, made of yogurt and shredded cucumbers; it’s a nice complement to the salmon’s slightly spicy preparation.

Once upon a time in 2007, three Georgetown undergrads put their heads together to brainstorm an idea for a business and BAM—the farm-to-salad-bowl hipster brand Sweetgreen was born. Through years of hard work and commitment, plus a boatload of venture capital (over $200 million), the brand now has some 90 outlets nationwide.

With its pristine subway tile, light pine wood accents, and rows of colorful chopped toppings and greens, the place certainly registers as a bastion of clean eating. The choices are abundant, and you can build a meal according to your tastes.

I fell for the hot sauce-laced Buffalo chicken salad, only to discover on a subsequent visit that it was a limited seasonal offering.

David Hagedorn is a food, travel and design writer, cookbook author and the restaurant critic for Arlington Magazine and Bethesda Magazine.