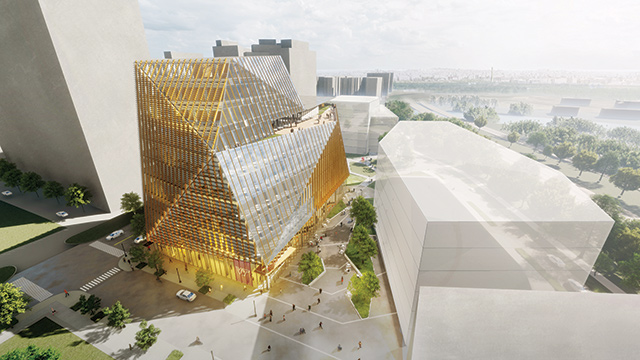 There was a time, not long ago, when Arlington’s economic outlook seemed bleak in the wake of government spending cuts and military base closings that left the county scrambling to fill millions of square feet of empty office space. Now the tech sector is sparking a renaissance. Buildings are filling back up, and new ones are under construction.

“As we come out of the pandemic, [investments in technology and education] become a factor in Arlington’s recovery and for the overall economic wellbeing and sustainability of our region,” says Kate Bates, president and CEO of the Arlington Chamber of Commerce.

Economic development officials say tech is the right match for an area blessed with a highly educated workforce, where the cost of living is too high to support a manufacturing center. It doesn’t hurt that D.C.’s political power center is right next door.

Northern Virginia’s Amazon bid also included funding for transportation projects like new Metro entrances, Route 1 improvements and a pedestrian bridge to Reagan National Airport. Part of the sell, says Telly Tucker, director of Arlington Economic Development, was convincing the tech giant that its employees would want to live here. “It was strategic for Virginia to invest in assets that benefited not only Amazon but the entire region,” he adds. “Everyone will benefit from that rising tide.”

But creating a talent pool for industries that, by nature, evolve at warp speed is necessitating some changes to academic norms. The ivory tower has never been famous for its adaptability. Universities are realizing they need to be nimble if they hope to remain relevant.

What does that look like? The new collegiate model finds computer science professors working with companies to push their research out into the real world; tech students earning credit and hands-on experience through internships; and businesses directly involved in curriculum development to ensure that future graduates have the skills they need, says Liza Wilson Durant, associate provost, strategic initiatives at Mason, whose office worked closely with AWS to design the nation’s first degree in cloud computing. Announced in 2019, that program allows students to start with an associate degree from NOVA and then earn a bachelor’s degree from Mason.

Mason also worked with aerospace and defense giant Northrop Grumman, headquartered in Falls Church, to create a groundbreaking cybersecurity engineering program that focuses on infrastructure like power grids and telecommunications. It became part of the university’s course offerings in 2015.

“What you’re seeing in the higher-education landscape is these companies are much more deeply engaged in the day-to-day work of the university,” says Durant, who is also a professor and associate dean of Mason’s College of Engineering and Computing. “They want to participate in the curriculum development to ensure they are able to find the talent they need.”

That doesn’t mean faculty are being cut out of their traditional roles, but companies are being invited in to shape electives in emerging fields. “Technology is changing so quickly,” Durant says. “We can’t have a program that doesn’t change.” 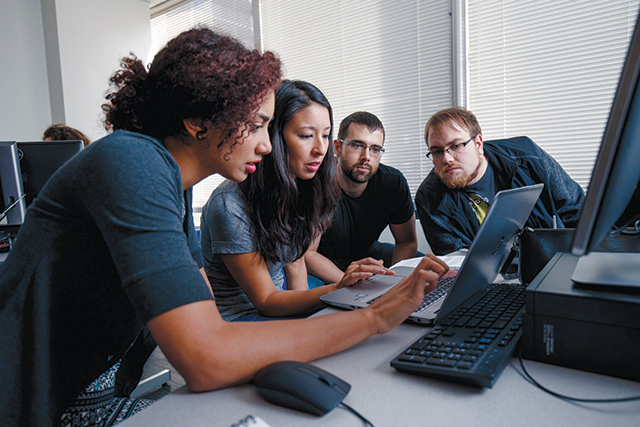 With the jobs landscape undergoing the most seismic shift since the Industrial Revolution and the supply of post-high-school students projected to flatten out in the next decade, colleges and universities also have a role to play in retraining or “upskilling” workers whose jobs have disappeared.

In July, Amazon announced plans to hire more than 100,000 U.S. veterans and military spouses nationwide by 2024 across multiple businesses, including Alexa and AWS.

Hesham El-Rewini, provost and senior VP of academic affairs at Marymount, says his institution is rethinking its degree programs to meet the moment. “Even before the pandemic, it became clear with advances in technology, and the proliferation of artificial intelligence and automation, that some occupations will grow, others will decline and others we cannot envision will be created,” he says. “People should be upskilling to prepare themselves for jobs of the future.”

To this end, Marymount, NOVA and other schools have begun emphasizing certificate programs that give quick bona fides in a particular IT field (such as data science, digital health or cybersecurity) that in the long-term can be combined with other certificates toward a degree. It’s a more flexible, a la carte way of building a résumé.

Many of the universities in this story are affiliated with Capital CoLAB (Collaborative of Leaders in Academia and Business), a partnership of businesses and academic institutions forging new pathways to tech employment. “Students can earn digital badges that show competencies of interest to regional employers like Amazon, Capitol One, JP Morgan Chase and others,” says Jonathan Aberman, dean of Marymount’s School of Business & Technology.

Andrew Flagel, president and CEO of the Consortium of Universities of the Washington Metropolitan Area, notes that this shift toward modular, “stackable” academic models allows students to piece together degrees by stacking certificates, life experience, military service and other modes of learning. Instead of marching through a set list of required courses for a degree, students can amass certificates and courses based on the skills they need for job readiness.