Old school academic models are being phased out, at least in the world of ed tech. Mason’s tentatively named Institute for Digital InnovAtion (IDIA) in Virginia Square, which replaces a university building that was already slated for expansion pre-Amazon, will facilitate a different approach by design. Blueprinted with hands-on learning and business networking in mind, the 360,500-square-foot building will devote a third of its space to industry partners—companies that will conduct research on site, recruit grad students to intern as software engineers, and receive incubator-style perks. Mason offers a free law clinic and other support services for start-up companies.

“The building will be designed to facilitate collisions,” associate provost Durant says of its planned open spaces and collaboration areas. “This space will enable people to have much more engagement and to hear about something someone else is working on.”

Since 2010, enrollment in Mason’s College of Engineering and Computing has doubled to 8,900 students. “It’s a function of the digital transformation of the economy,” Durant says.

Virginia Tech’s Innovation Campus at Potomac Yard promises a similar hybrid environment. Companies will have a different relationship with the school than the traditional stop-by-to-interview-graduates approach, says vice president and executive director Lance Collins, formerly the dean of Cornell University’s College of Engineering and a key member of the team that launched Cornell Tech in New York City. (Virginia Tech hired him away a year ago to shepherd the build-out of its Northern Virginia campus.) Under the new model, the introductions will come earlier, with future employers issuing challenges for students to hash out in group projects.

Academia teaches skills like coding, but the approaches are often too tidy, Collins says, compared with the complex scenarios that arise in the real world. Take the question of whether (and how) drones might be used for airport safety inspections. Computer science and robotics are central to the solution, but so are skills like listening to divergent viewpoints, managing conflict and untangling thorny ethical questions.

Collins says higher education has recognized a responsibility to teach those so-called “soft skills” (a term he considers a misnomer, as they are not easy to master) before students head out into their professional careers.
Steve Cooper, co-founder and CEO of Arlington-based NextUp Solutions, which provides training and outsourced software engineering services, is doing just that through technology apprenticeships. He brings in students from Virginia Tech and Radford University to work as junior software developers on projects for private sector, nonprofit and government clients. Students gain relevant experience while helping clients whose IT projects are running behind schedule, in part because there’s a labor shortage.

It’s a win-win, Cooper says. The software gets built. Companies and students have the opportunity to size each other up for potential employment down the road. And for students, that foot in the door can make a big difference in a market where every employer wants candidates with at least one year of professional experience. Businesses want to know, “What have you done?” Cooper says. Gaining applicable experience during college is “making them 20 times more employable.”

There’s another benefit, too. Hands-on learning increases diversity in the field, Cooper says, because hiring decisions become more about skills and experience—and less about connections and who professors recommend. “If you hire someone based on ‘I’ve built this technology in Python,’ employers don’t care what fraternity you were in.” 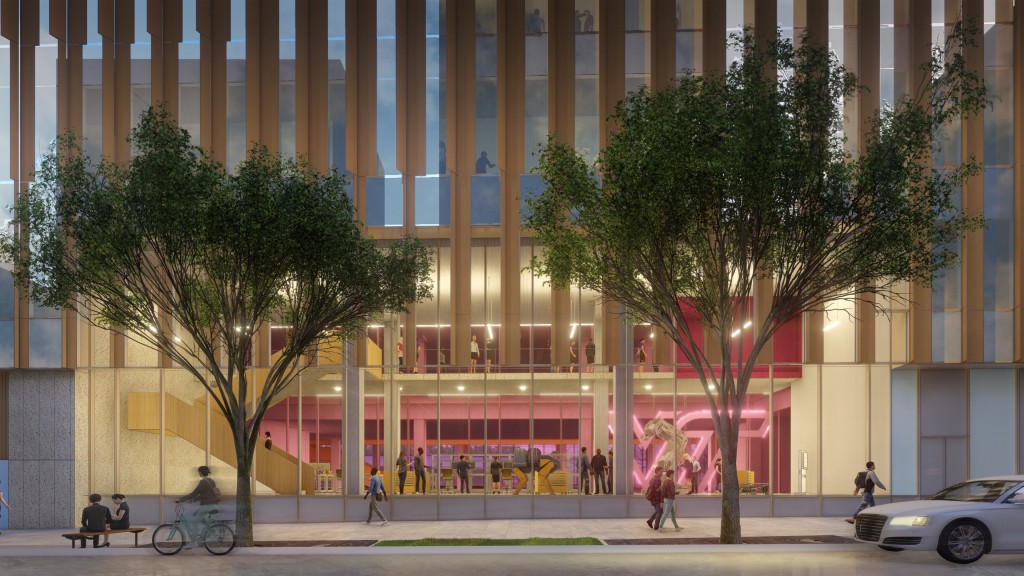 As Virginia Tech’s new campus comes out of the ground, Collins notes that building a program from scratch means there are no existing faculty to inherit—the university can hire new staff with diversity and inclusivity as founding principles.

“I hope all these new [university] facilities are going to bring us a new way to educate and prepare ourselves and not just more of the same,” Cooper says. “You’ve got to retool instead of simply stealing talent from one high-rise in Clarendon to another.”

Collegiate rivalries may be alive and well in sports, but in the tech space they are becoming quaint. Instead, universities are joining forces to produce qualified graduates through partnerships. “There are economies of scale for all of us to work together,” says Mason’s Durant.

In 2018, Virginia Tech created the blueprint for the Commonwealth Cyber Initiative, a state-funded network that now includes 40 higher-learning institutions and some 320 researchers dedicated to engaging students in experiential learning projects in cybersecurity. The current fiscal year’s $17.5 million funding allocation is supporting student internships in fields such as smart infrastructure and autonomous systems.

“This region can’t thrive as a tech hub unless we have the talent,” says Ken Ulman, the chief strategist behind the University of Maryland’s plans to open a Discovery Center in Crystal City (see sidebar on page 54). “The number of jobs being created demands that all of us in the region work together and make sure we are collectively providing the workforce of the future.”

Will the all-hands push lead to an oversupply in the job market? Virginia Tech’s Collins isn’t even remotely concerned. Behemoths like Amazon aren’t the only employers clamoring for tech talent, he says. The need extends across a vast swath of industries, including intelligence, construction, transportation, defense and health care. And the number of specialties under the tech umbrella continues to expand—cloud computing, cryptocurrency, biodefense, artificial intelligence and data analytics, just to name a few.

“As people use data in more and more robust ways, it’s really limitless,” Collins says. The real competition isn’t with other universities—it’s with other countries that want to knock the U.S. off its tech pedestal.
For more than 70 years, Marymount University’s main campus has occupied the same stretch of rolling green hills just off of North Glebe Road. Once it was the only college in town. Now there are many other players in Arlington’s higher-ed landscape.

Provost El-Rewini equates those new arrivals with progress. Students are gaining access to more internships. Companies are cultivating the talent they need to grow. Professors are finding support channels for their research. The local economy is buoyant.

“This is how we advance,” El-Rewini says. “At the end of the day, this is what we hope to do: Improve quality of life for people.”

Tamara Lytle is a freelance writer in Northern Virginia.

Location: North Potomac Yard in Alexandria, just south of National Landing
Price tag: $1 billion
Snapshot: The first of three planned buildings on a campus spanning 1 million square feet will open in 2024, at which point the program (based in Falls Church since 2020, with 75 students) will relocate to Potomac Yard. Once completed, this graduate school campus will host 750 master’s degree students and 200 doctoral students annually, with research concentrations in artificial intelligence, cybersecurity, quantum information science, next-generation wireless and other areas. Students from feeder schools like James Madison University and Christopher Newport University (as well as Virginia Tech) will be able to apply early and start earning graduate credits while finishing their undergrad degrees. Defense giant Boeing kicked in $50 million to fund diversity priorities on campus. Virginia Tech also maintains a 144,000-square-foot research center in Ballston.

Location: Virginia Square
Price tag: $250 million
Snapshot: Housed in a new building (set to replace an older one) on Mason’s Arlington campus, IDIA will open in 2025 with more than 360,000 square feet of space, serving more than 300 Mason graduate school students, faculty and staff, along with several tech businesses. As part of the Amazon deal, Mason is expanding its computer science programs to produce an additional 8,000 bachelor’s and master’s degree graduates over the next 20 years. IDIA will push technological advancements in education, finance, health, transportation, national security, social justice and other areas. A built-in incubator space will focus on growing start-up ventures, especially in the Rosslyn-Ballston corridor.

Location: Ballston
Price tag: $75 million
Snapshot: Opened in 2017, this campus extension of Arlington’s oldest university houses the business school, select graduate programs, student residences and a cybersecurity lab serving 150 doctoral candidates, among others. Marymount’s main campus, located 2 miles up the road, spans 21 acres with an undergraduate population of about 2,200 students. The university offers degrees in cybersecurity, cloud computing, data science and other IT fields, plus a number of specialized certificate programs. A doctoral program in business intelligence launches this fall.

Location: Crystal City
Price tag: Not available
Snapshot: Opening in the fall of 2021, this satellite center will occupy 8,000 square feet on one floor of an Amazon building, providing space for faculty and some students studying computer science, engineering, information studies and business, as well as space for symposia, collaborative projects with industry, career development and alumni functions. The University of Maryland has roughly 3,600 undergraduate and graduate students majoring in computer science. Its main campus in College Park is 11 miles away and connected to the Amazon campus by Metro.

Location: Rosslyn
Price tag: Not available
Snapshot: Opened in phases starting in 2017, the 40,000-square-foot satellite campus houses about 300 students working toward an executive MBA, master of science in business analytics or other executive education degrees. The executive MBA program has a lab in which students hooked up to biometric monitors are put in simulated high-stress situations to learn how they react under pressure. “Moments like these call for fresh thinking and approaches,” says Greg Fairchild, associate dean for Washington, D.C., area initiatives and academic director of public policy and entrepreneurship. “We have a responsibility to help [students] utilize [IT] skills to create a better society.”

Location: Rosslyn
Price tag: Not available
Snapshot: Opened in 2021 on one floor of the Arlington Tower, this 17,000-square-foot outpost of the Boston-based university devotes half of its space to graduate-level classes; the other half will house defense-based programs and research. Ramping up over five years, the Arlington location will eventually support roughly 100 students, faculty and staff. Some 88% of Northeastern University’s $180 million in R&D grants and contracts in 2020 came from the federal government, according to the Washington Business Journal. The university maintains a larger Innovation Campus in Burlington, Massachusetts, fueling Boston’s tech corridor.

Though you won’t see major changes on the outside, NOVA is adapting to the region’s technology industry growth and luring adult learners back into the classroom with flexible programs that mesh with work and family responsibilities. NOVA offers a number of certificate programs and is partnering with Mason to offer complementary degrees.