The Proposal to rename isn’t just a two-sided debate. Some have taken issue with matters of procedure—specifically, how quickly the school board expedited plans to change the name, and how little external input was factored into that decision. Critics see the move as an undemocratic breach of process that’s tantamount to railroading.

After unanimously adopting new criteria for public school nomenclature in June, the board determined (during the same meeting) that the name “Lee” failed to conform with its newly minted “principal legacy” provision, which mandates that a school’s namesake must have “contributed to society in ways that supported the success and well-being of the [community]” and in a way that “aligns with or reflects the APS mission, vision, and core values and beliefs.” Using that framework, the board concluded that Lee’s Confederate legacy rendered him unworthy of having a school named after him and voted to change W-L’s name.

Some county residents perceived that move as a unilateral decision that ran contrary to “The Arlington Way”—the long-standing tradition of thorough citizen input on major county decisions.

In July, three students and their parents, with support from several W-L alumni, filed a lawsuit with the Arlington County Circuit Court, alleging that the school board had ignored its own protocol by failing to allow adequate time for community input.

Though the June meeting had included a brief period for public comment, critics felt it wasn’t enough time for the substantive dialogue that this potentially divisive decision required.

“I’m not on one side or another [of the naming debate]. We just want to make sure the students’ voices are heard,” says W-L senior William Johnson, a plaintiff in the lawsuit. “Honestly, it felt like no one’s voices were being heard.” 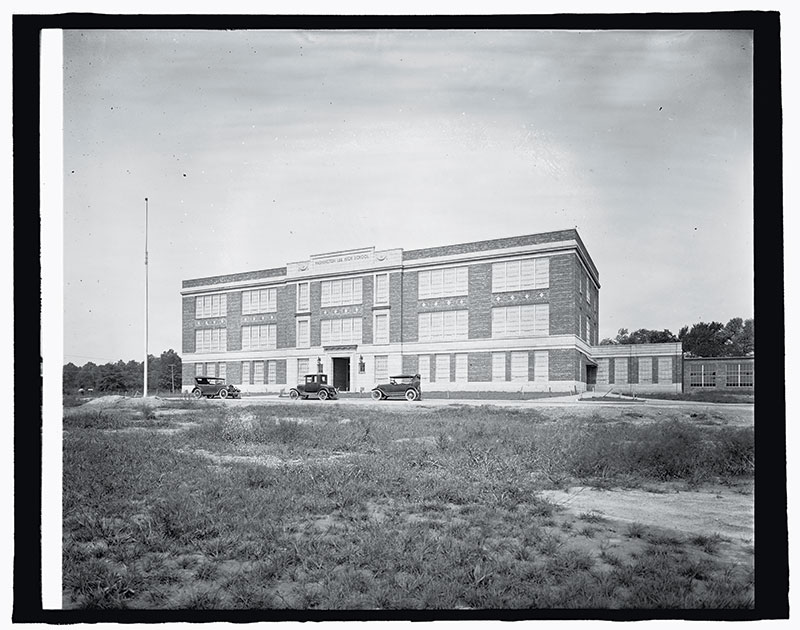 Washington-Lee High School in the 1920s. Library of Congress.

Washington-Lee High School opened its doors on Oct. 6, 1925, borrowing its name from Washington & Lee University in Lexington, the small liberal arts college founded in 1749 that received its first endowment from George Washington and later named Robert E. Lee as its president in 1865. To avoid confusion between the two schools, the Arlington high school adopted a dash in place of the university’s ampersand.

Both of the schools’ namesakes were prominent Virginians, slave owners and generals (W-L’s sports teams are the “Generals”). But those who find the “Lee” part offensive draw a clear distinction between the two men: Washington fought to create a new nation, while Lee joined the side that would have torn the country apart. “Robert E. Lee was a virulent racist and traitor to his country,” says Dana Raphael, a 2013 W-L graduate and now a member of the school board’s official renaming committee. “There is simply no place for Lee on a school building. [He] belongs instead in history textbooks, alongside the horrors that the Confederacy and slave-owners perpetrated.”

Says Douglass, Class of 2018: “You don’t get a mulligan for trying to destroy the country.”