Spring break, 1991. It was one of the worst moments of my life. And also one of the best. 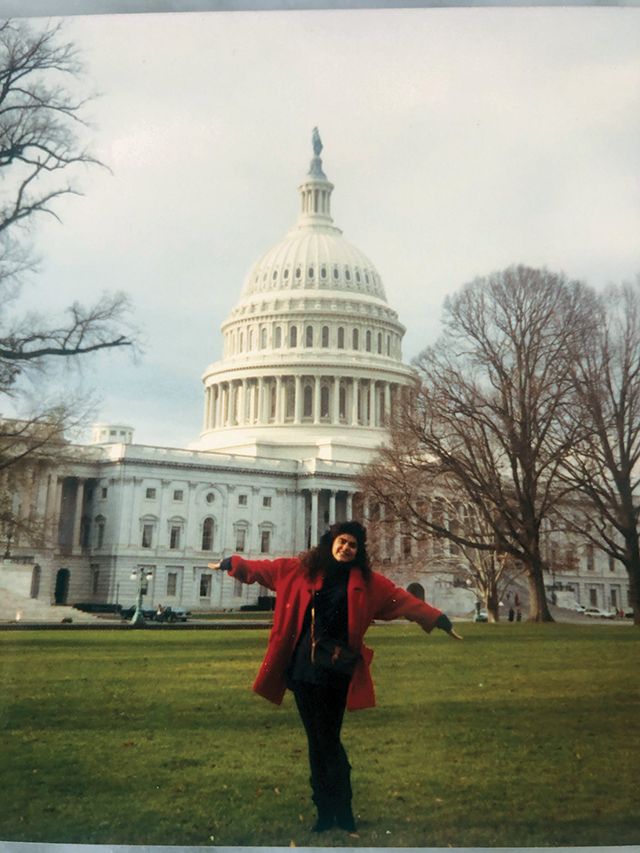 Ever since I was a girl in Iran, I loved the idea of America. I watched American movies and read American books. I coveted everything they represented: freedom, independence, equality. So when my parents sent me to an all-girl boarding school in California in 1984 (after my family had emigrated to Canada three years earlier), I thought I’d finally come home.

During college at Georgetown University, my ideas about America became more refined but my adoration didn’t wane. Even though I wouldn’t become a citizen for a few more years, in my heart I already belonged to America. And when my kindhearted friend Sofia asked if I wanted to go to Cancun for spring break, I jumped at the chance to experience the spring break I had seen in Hollywood movies.

By then it was 1991 and the Gulf War was in full swing, but the war was the last thing on our minds as we boarded the plane. Sitting in front of us was a pack of guys from New Jersey, already inebriated, on their way to making spring break decisions that would surely embarrass their parents. All were wearing sports logo-ed T-shirts (perfect for displaying their bulging biceps) and backward baseball caps, as is the way of the bro.

Upon arrival we quickly fell into our vacation routine: sleeping late, hanging out at the tourist-packed pool, then squeezing into a cab to go to dinner at Señor Frog’s, a smelly, sticky, testosterone-filled restaurant with yardstick tumblers of flavored margaritas bearing names like Frogasm and Red Headed Slut.

On the fourth day, one of the girls in our group decided we should go on a booze cruise. We’re going on a cruise? That’s a change from our nightly Señor Frog’s madness, I thought. How fancy!

I was very much mistaken about the evening’s events. The cruise was just Señor Frog’s, but on a boat.

When we got to the dock, we saw the horde of Jersey boys from the plane. They were in peak form—loud, rowdy and ready to tear it up. There were Jell-O shots as we sailed to a tiny island. Shortly after dusk, we gathered on the cold sand in front of a makeshift stage ready for the talent show, some of us tipsy and others completely wasted.

The emcee, a tall Mexican man with a youngish, clean-shaven face, asked in his heavily accented English: “Who wants to come up here and show us what they’ve got!?”

One of my friends suggested I volunteer, and in my buzzed state I must have thought it was a good idea, because I remember bouncing up onstage. The emcee said we’d be singing “New York, New York,” a classic Frank Sinatra song that was about to be butchered. This next part I remember clearly, and in slow cringe-inducing motion.

The three Jersey guys who’d joined me onstage were introduced and got a big round of applause. They did their rendition of “New York, New York,” each with his own flair of half-funny, half-embarrassing theatrics. When they finished, the crowd went wild.

I was the last to be introduced. 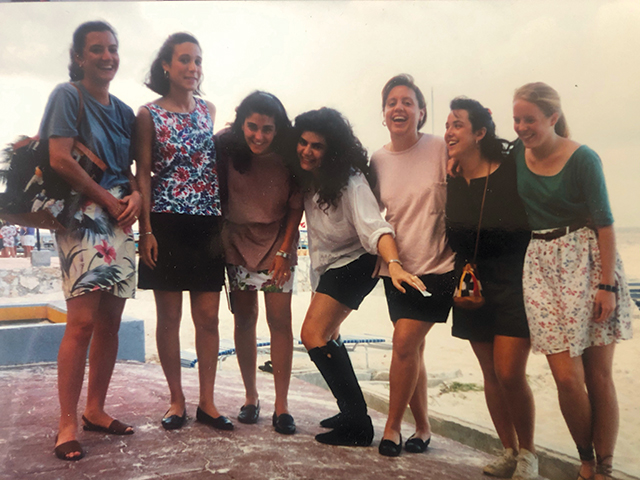 The writer (center) with her friends during spring break, 1991

The emcee asked my name and where I was from. At that point I’d been in the U.S. for six years and felt like the all-American girl. But I wasn’t technically American, so I said, “Hi! My name is Rebecca and I’m from Canada.”

The emcee looked at me and, without skipping a beat, said, “No, where are you really from.”

I hesitated for a few seconds, and then said, “Well, ummm…I am originally from Iran.”

There was an awkward silence and then a few unseen “boos,” along with a barely audible spatter of claps.

The emcee, feeling sorry for me, tried to lighten the mood by saying with a chuckle: “Guys, it’s Iraq we’re mad at, not Iran!” Big help, I thought. Thanks for that. “OK, Rebecca, show us what you’ve got!”

In what can generously be described as a terrified out-of-tune voice, I began singing—“Start spreading the…newssss. I’m leaving to-dayyyyyy…”—and robotically kicking my legs like a Rockette. Within seconds, I heard the first guy in the crowd shout, “Boo!”

He stretched out the word for as long as he had breath in his inebriated lungs. Then came the second and third “Boooooo!!”—each one louder than the last. Then another and another, until there was a thunderous chorus of mostly “boos,” interspersed with “you suck” and “get off the stage.”

It felt like the world was about to consume me whole. I had seen myself as belonging, and then suddenly a torrent of voices violently shattered that image. It was soul-crushing.

Rage blazed through me like a forest fire. I had a choice—be defeated or fight back. It was a split-second decision.

I stopped singing and zeroed in on the guys who had started the booing, locking eyes with the one closest to the stage.

With one hand, I brought the microphone up to my lips. With the other, I pointed directly at his face and shouted—and I mean shouted—“F*** YOU!!!!”

Once the words were out of my mouth, I felt a rush of power. I quickly scanned the audience, serially pointing out every other person I had seen instigating the hateful jeering. “F*** YOU! F*** YOU! F*** YOU!!!”

The crowd fell utterly silent. Then something surprising happened.

As I continued my prosecution of my tormentors, someone started clapping; then a second person, and a third.
Soon, the whole crowd had changed its tune and was cheering me on. I was still physically shaking from rage, but I felt exhilarated and vindicated. I had turned the tide.

The emcee, stunned but trying to get the train back on the track, rejoined us onstage. He asked the contestants to stand in a row and announced that the winner would be decided by the loudest applause. I didn’t win, but I came really close.

The minute I stepped off the stage my friends rushed over, horrified but also laughing at my reaction. As we boarded the boat, people in the crowd started approaching me to praise my performance.

Then the ringleaders of the group that had booed me came up and either apologized in their own childish ways (“Hey, listen, sorry about that, you’re cool”) or put their arm around my shoulder and told me approvingly that I was a badass.

I’m still not sure if I made the right decision that night. Things could have gone very wrong.
But the experience showed me what I was capable of when mistreated. That’s the gift this country has given me—the strength to stand up for myself, as a woman and as an American.

Rebecca Morrison is a freelance writer and host of “The Second Half,” a podcast about people’s stories. She lives in Arlington with her husband and two boys.