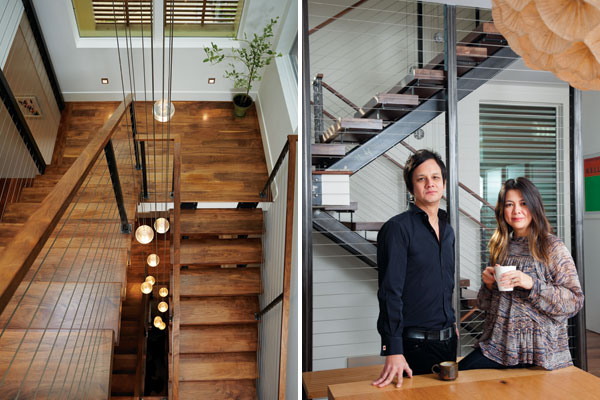 “We’ve always loved modern,” says Chris Mataka, who’s lived in Arlington with his wife, Geraldine, since 1998. “I just didn’t think it was a possibility. I thought it was a pipe dream.”

That long-held assumption shifted in 2008 when the couple attended an open house at a home built by Sagatov Design + Build and realized that contemporary design and living in Arlington weren’t mutually exclusive. Add to that a profitable condo sale and a bit of inheritance, and the Matakas were soon searching out lots with Yuri Sagatov, principal of the Falls Church firm. 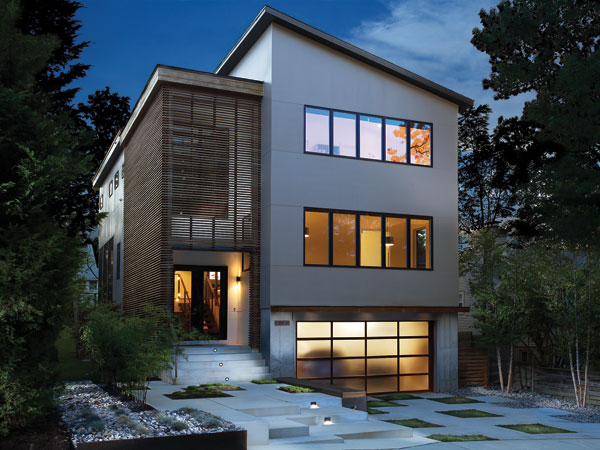 At night, the house glows from insides like a lantern. Photo by Barry Harley.

After losing several bidding wars, they finally found a teardown property in Lyon Village. The lot was narrow, but it had good southern exposure.

Seeking a “modern but warm” house for themselves and their three kids—Sebastian, 10, and twins Kiko and Sachi, 6, all students at Key Elementary—the couple worked with Sagatov to define their vision. Though his background is in IT, Chris recently became a partner at El Camino, a Mexican/Southern California-themed restaurant in D.C.’s edgy Bloomingdale neighborhood. At home, he says, “the kitchen was very important.”

The main floor is anchored by a central kitchen with a massive, concrete-topped island and a white-lacquered wall of cabinetry with built-in appliances. The open plan also includes a custom, 10-foot dining table, around which Chris and Geraldine, a partner/owner at a boutique law firm downtown, now entertain frequently. “We were used to small apartments,” Chris says, “where it was rare when everyone could sit down.” 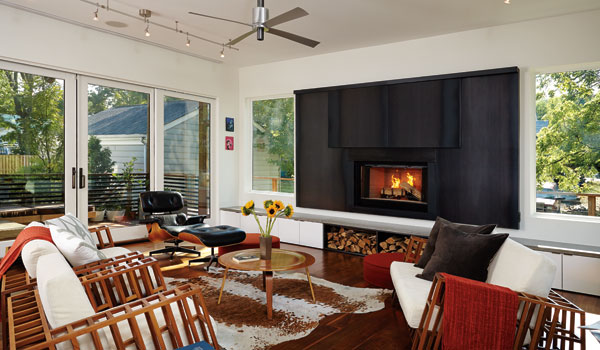 Another design priority, explains Sagatov, “was to create a sophisticated home using raw materials,” including a variety of natural wood species, concrete and metal. In the family room off the kitchen, a steel fireplace surround is outfitted with sliding panels that hide the TV. Steel beams provide the structure for an open staircase with walnut risers and landings.

Natural materials also carry over to the outside, where a cedar screen shades the glass stairwell and provides a warm, textured complement to the home’s smooth cement-paneled exterior. “Aesthetically, it balances the mass of the house,” Sagatov says of the screen. It also offers privacy while filtering plenty of light inside. 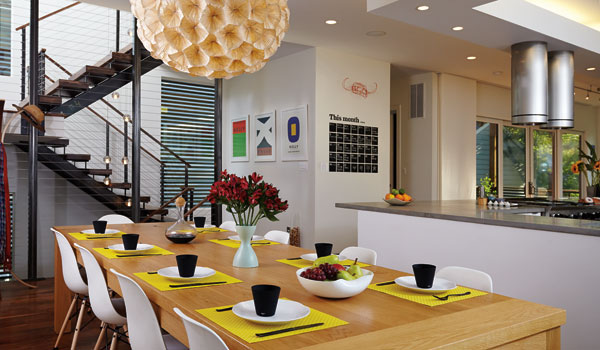 Sleek beauty notwithstanding, the home is also ultra-green, featuring a geothermal heating-and-cooling system, spray-foam insulation and tight air-control systems. With these efficient features, the Matakas’ utility bills (gas and electric) average about $160 per month. Sagatov wagers this is about half the cost of maintaining a conventionally built home of the same size.

The house is “very customized to that lot and its specific orientation” to take advantage of natural sunlight and shade, he says. “The design is really a reflection of what they were looking for.”