Kevin and Anne Boyce are true locals. They grew up in McLean and Arlington, respectively, and for 15 years lived within a five-minute drive of both sets of parents. When they and their three kids outgrew their house in Arlington, they knew they wanted to stay close to family. 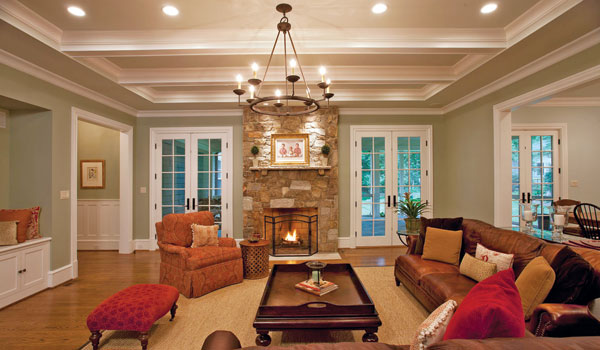 A central chimney connects to hearths facing both the family room and the adjacent screened porch. Photo by Ken Wyner

The house across the street from Anne’s parents (in the Sigmona Park neighborhood of Falls Church) had come up for sale in 2008, but it was out of the Boyces’ price range and was ultimately taken off the market during the recession.

Circumstances improved three years later, when the Boyces were in a better financial position and the owner of the house announced plans to move to a retirement community. 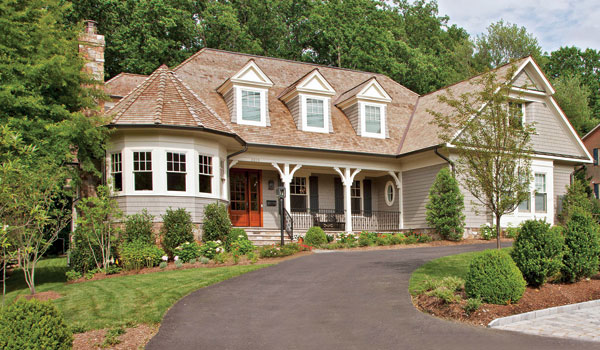 The homes’ Cape Cod-style architecture is reminiscent of the shingle-style beach houses on the Jersey shore where Anne and Kevin vacationed as kids. Photo by Ken Wyner

At that point Anne’s mother, Rosemary Melnick, a real estate agent with Century 21 New Millennium, brokered a new deal that worked out for everyone. The Boyces then set about tearing the old house down to make way for new construction.

“I don’t know how we got so lucky,” says Anne, a longtime oncology nurse at Inova Fairfax Hospital who’s currently on sabbatical. To build their new home, the couple hired Stephen Smith, owner of Arlington-based Ventura Group, who is married to Anne’s identical twin sister. Smith then connected them to his frequent collaborator, architect George Myers, with GTM Architects in Bethesda. 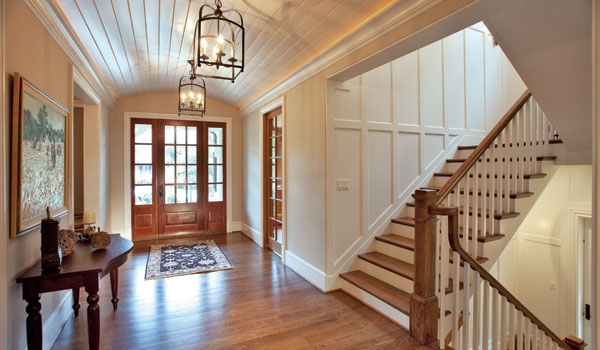 The floor plan of the Boyces’ new home is somewhat unusual in an area dominated by center-hall colonials with bedrooms upstairs. In a preemptive and practical move, the couple asked for a master bedroom on the ground floor—a design feature that would allow them to remain in the house long-term, even if age, injury or disability one day prevented them from using the stairs. “We’re going to live in this house until, like, forever,” Anne says.

Their 20,000-square-foot lot made it possible to accommodate that wish, along with a kitchen, family room and library on the same level. (The library doubles as a home office for Kevin, who is chief financial officer for Ellucian, a Fairfax-based company that provides software services to higher-education institutions.) The bedrooms for their 15-year-old twins, Tommy and Paul, and 11-year-old Allie, occupy the second floor. 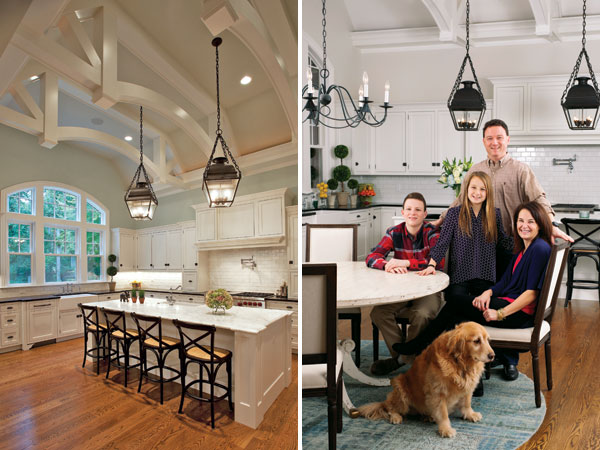 A huge screened porch runs the length of the family room and dining area, with back-to-back fireplaces facing both inside and outside. As a result, the porch gets used year-round, even in cold weather. (Anne says that making s’mores is a popular activity.)

She credits Smith and Myers for giving her family a house that they won’t outgrow and won’t have to leave, even as their lifestyles evolve. “I couldn’t have done it without them,” she says. “George is so laid-back and nice, and Steve is OCD about the details. They just work well as a team.”

Jennifer Sergent lives in Arlington’s Waverly Hills neighborhood. She is the creator of the design blog DC by Design (dcbydesignblog.com).