Julie and Alan King weren’t looking to move, let alone thinking of building a new home. But as Julie says, “I like houses—I would move every couple years if I could.” Hence, their real estate agent would call every so often if she saw something good. 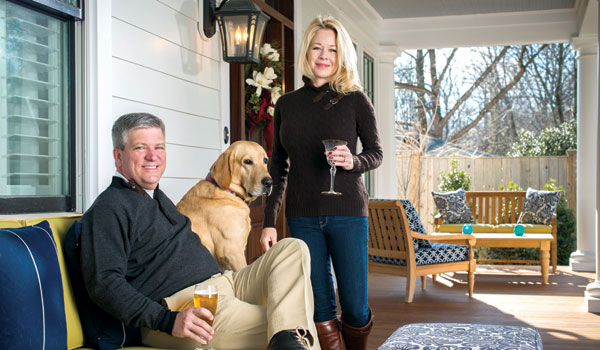 Alan and Julie King with their dog, Sam. Photo by Darren Higgins.

In the spring of 2012, Susan O’Connor of Keller Williams came across something really good: a property in Arlington’s Rock Spring neighborhood that was coming on the market and was certain to be snapped up quickly.  The house was in bad shape (“It was an old, run-down house—it took about five minutes to knock down,” Alan recalls), but its large corner lot (slightly more than a quarter acre) near Williamsburg Middle School was too good to pass up. This was an opportunity for the Kings to build from scratch in an architectural style they loved but were hard-pressed to find in Arlington: a traditional, Southern-style foursquare house with a wide, wraparound porch.

“Alan and I grew up in the South, and the porches just aren’t adequate here,” Julie says. 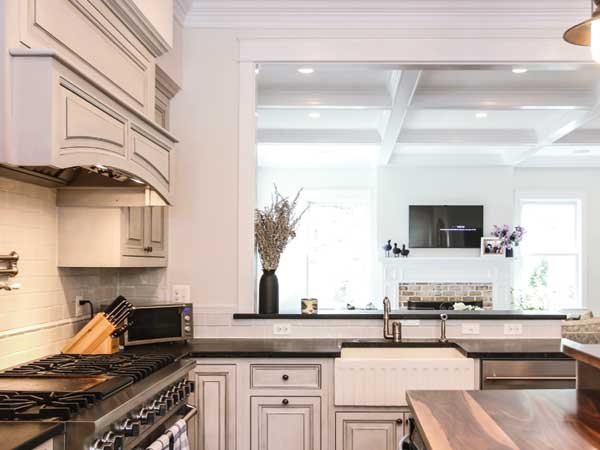 The kitchen features a walnut island and soapstone countertops. The walnut flooring was sourced from a mill in New Hampshire. Photo by Marlon Crutchfield.

Other priorities on their wish list included high ceilings, dark-walnut floors and huge French doors that open outward from the dining room onto the porch. To achieve their aesthetic while accommodating the functional needs of their busy family (the Kings have two daughters, ages 10 and 11), the couple turned to architect Dwight McNeill of the McLean firm McNeill Baker Design Associates and builder Daniel Steinkoler of Washington, D.C.-based Superior Home Services. 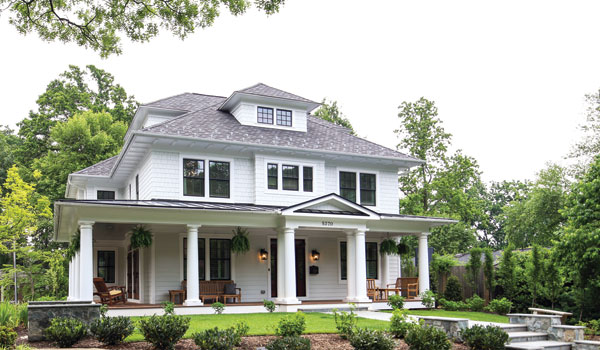 The Kings weren’t typical clients, McNeill recalls. Whereas many homeowners want as much space as possible on the inside, they were willing to sacrifice some of that interior square footage in favor of a more expansive outdoor realm. “Every time we brought in a schematic [drawing], Julie would say, ‘The porch needs to be bigger!’,” the architect says with a laugh.

Fortunately, the ample corner lot was big enough to support an 8-foot-wide porch with mahogany decking and 16-inch columns. The absence of railings makes the veranda appear even broader as it flows directly out to the rolling lawn. “It looks like an old plantation house,” says Alan, a tax partner at PricewaterhouseCoopers. 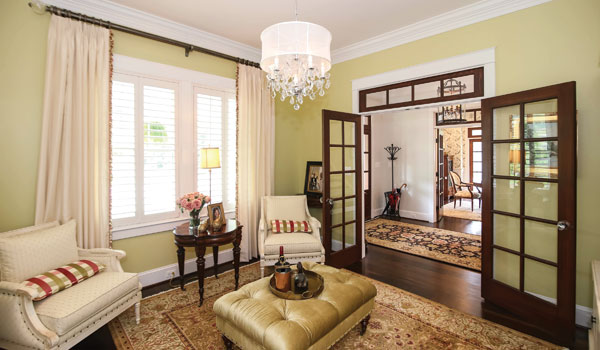 The Kings went with traditional furnishings from Ethan Allen and hardware from Caprio & Deutsch on Lee Highway. Photo by Marlon Crutchfield

Inside, the home is no less genteel, its Southern character marked by chair-rail molding, transoms above the doorways and crystal chandeliers with matching doorknobs. With a lower-level bar, an additional screened porch and a pool in the back, it has a laid-back elegance that makes it perfect for entertaining. “We have people over all the time,” Alan says. 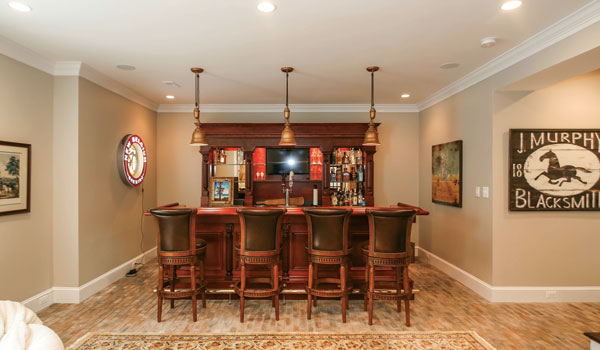 Designed by Fairfax-based craftsman Bud Mepham, the custom bar on the lower level is similar to the one Mepham built for the Goodstone Inn in Middleburg-one of the Kings’ favorite retreat. Photo by Marlon Crutchfield

Of course, there are also quiet mornings and lazy evenings when the porch offers just the right spot to hear birdsong over coffee, or to watch the fireflies with a glass of wine.