Why the 2018 Boston Marathon will go down as the "worst wet T-shirt contest ever." 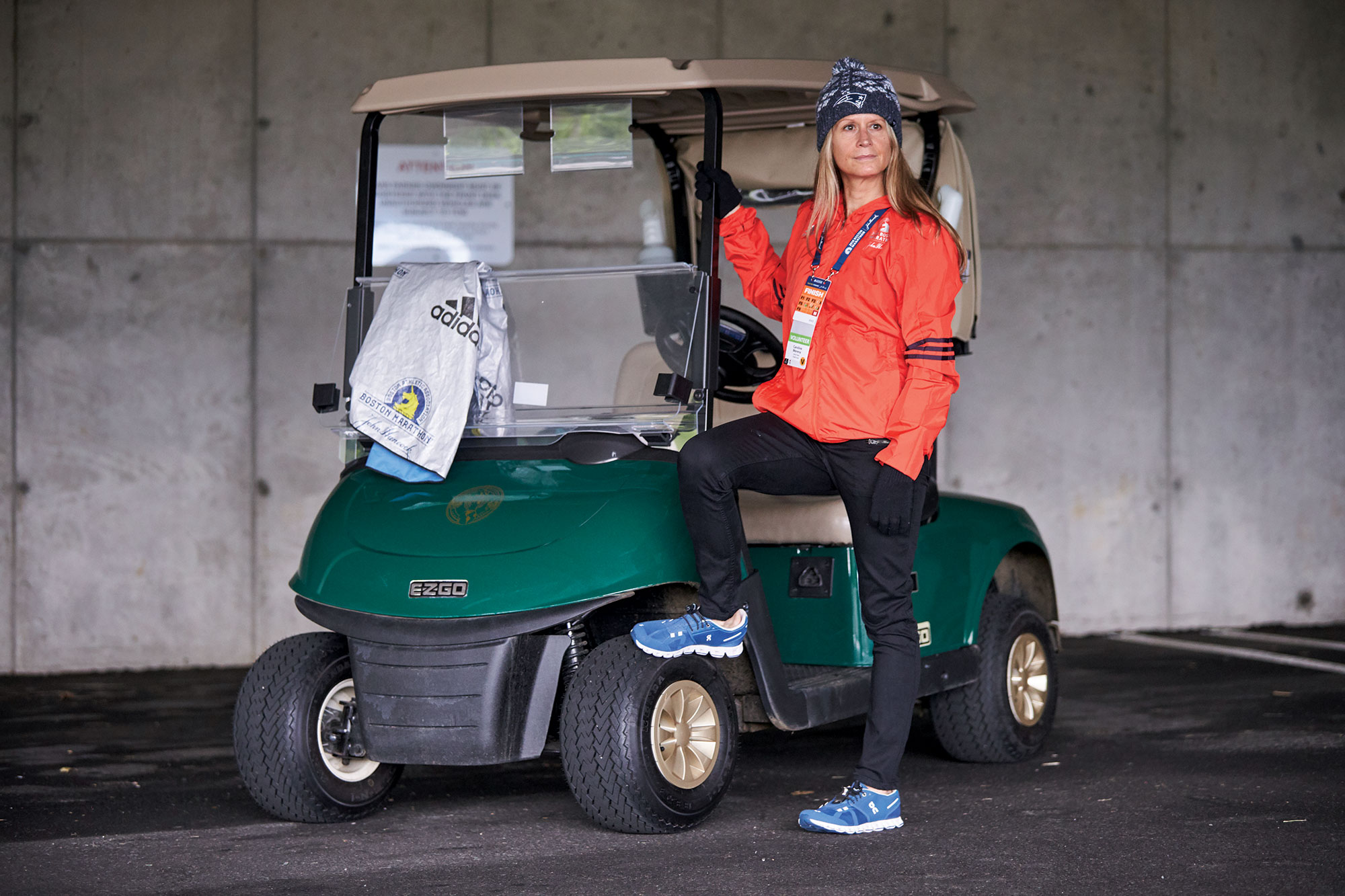 My introduction to volunteering at the Boston Marathon in April 2018 was a rough one. I’ve run the race about 15 times, but I’d never spent the day on the other side of the finish line. I had no idea what to expect as a volunteer, and the marathon ended up having the worst weather in the race’s 122-year history. It was 38 degrees and wet. The only change in the weather was when the sky opened up and it rained even harder.

Boston is a point-to-point race. The runners start in a town called Hopkinton and finish 26.2 miles later on Boylston Street in Boston. The finish line is empty at the start of the race (except for a few staff and volunteers) until the elite runners begin to arrive roughly two and a half hours in. I had assumed I would be working the bag check, but thanks to a social connection, I was assigned to the finish area as assistant to the finish line director. I was elated.

Four minutes after my arrival on marathon morning, I was speeding past tables of medals and Mylar cloaks, in a golf cart with a man named Ed. Halfway down the five-block, secure finish area, a volunteer at one of the food tables hailed us with a box-cutter emergency.

Ed sprang out of the cart, barked at me, “Go to 200 Berkeley, get three wheelchairs and take them to DQ!” and then vanished. I knew what none of those words meant and did not know how to drive a golf cart.

About an hour later, having become the Zen Master of golf cart driving, I had found DQ (disappointingly, it was not a Dairy Queen), delivered said wheelchairs and met a lovely EMT with a killer Boston accent. His volunteering advice to me was this: “Welcome to the Boston Marathon, hon, just do what makes sense.”

He had been near the bombs when they went off near the finish in 2013. He recounted the initial confusion, followed by the sight of Martin Richard, the 8-year-old boy killed in the blast. “It was very obvious he wasn’t going to live,” he said. I honestly don’t know what I replied.

I’m a huge running nerd, with 33 marathons behind me, and Boston is The Show. While I’m capable of acting like a normal person when I meet famous people like Oscar De La Hoya and Matt Damon, I tend to go all fan-girl around famous runners. Just ask 1973 Boston Marathon winner Jacqueline Hansen, who somehow became my friend when I was up for the race in 2016, and kindly tolerates me. I was beyond excited to be at the finish line with an all-access pass, no matter how cold I was.

Approximately two hours and 38 minutes after the start, I was thrilled to see Desiree Linden coming down Boylston Street, and was only a few feet away when she became the first American woman to win the race in 33 years. I watched a race official taking Des’ trophy out of its plastic rain bag as Joan Benoit Samuelson strolled past, exuding fitness at 60, on her way to congratulate the winners. It was amazing, like being in the dugout during the World Series.

And then Molly Huddle crossed the finish line.

One of the four American women favored to win, Huddle finished in 16th place, eyes huge and unfocused, stumbling. That’s when it dawned on me: If this was what the pros looked like, it was going to be horrible for the regular people. The elites waited on heated buses before the start, while the regular runners huddled in the river of mud and rain that was the pre-race Athletes’ Village. You cannot stay dry on a rainy run, and this rain was frigid, hitting them sideways and creating huge puddles on the course. I myself was wearing a rain poncho, ski pants and five layers of clothing—and I was still soaked to the skin.

The medical tent, pristine and empty at the start of the race, was quickly packed with shivering runners swaddled in blankets and staring at the ceiling in misery, the air filled with the din of their shaking cots.

“It was the march of the hobos,” said McLean resident Winson Cumberland, 47, who finished in 3:36. “People ran the whole race in garbage bags and then ripped them off for the finish line photos as they turned onto Boylston.”

The Boston Globe later reported that 2,500 of the nearly 30,000 runners required medical care, and 81 went to the hospital for hypothermia and frostbite. A week later, rumor had it that 10 were still hospitalized.

At the finish, people crossed in shower caps. They cried. They threw up—which the rain luckily washed away.

Julia Taylor of Arlington was smart enough to have booked a hotel two blocks from the finish, so she kept running until she was safe and dry in her room. Joe Martinez of Miami also was able to run straight through the finish and back to his hotel—that is, after a mid-race stop in a medical tent because his hands had frozen into fists.

Arlington resident Jennifer Requist, 45, had qualified to run the race for the first time and was realizing a longtime dream. Upon receiving her medal, she kissed it, gave it the finger and said, “I waited 15 years for you and you give me THIS day???”

I’ve heard people say the Boston Marathon Nor’easter year in 2007 was worse. It was not. I was there. Anyone who doubts me on this can spend four hours in 38-degree water and report back.

It takes a special kind of person to train and qualify for the Boston Marathon. You have to meet a standard, based on your age and gender, that gets tighter every year, just to have the privilege of competing. There is no quit in these people. Some 95 percent of the runners who toed up at this year’s starting line finished the race. In other marathons, 80 percent is a normal finish rate, even in good weather.

After a long day of helping where I could, the last runners finished about six hours after the start. We congratulated them and directed them toward medical help, medals and blankets, warning them not to stand still.

I heard the volunteer next to me say, as he gestured people along: “Food, warmth, your families—everything good in the world this way!”

Arlingtonian Caroline Merena has run 33 marathons and is a running coach at ArCTIC (Arlington’s Coaching – Training and Injury Center) in Courthouse. When she’s not on the trails in Arlington or running around D.C. you can find her at Potomac River Running in Ballston.