Football Is For Girls

In the world of flag, the Virginia Hurricanes are known as the team to beat. 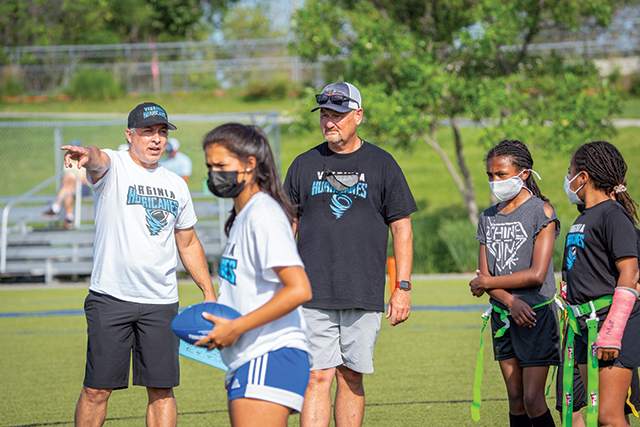 The cicadas are belting out their final chorus on a hot day in June as the Virginia Hurricanes take the field for flag football practice at Dorothy Hamm Middle School. It’s 5 o’clock on a Monday, the practice time that worked best for this group of 12-year-old girls, all of whom play other sports but still want to play “flag.” Coach Mike Rivera built a spreadsheet to figure out when all could meet and still attend their various other practices.

“Again,” Rivera calls. The players line up along what would be the 50-yard line, if the practice field were marked. The center snaps the ball and the girls move in formation. Hand off. Reset. Pass. Reset.

Rivera remains here in Arlington, coaching other people’s daughters year-round in both flag and girls’ basketball under the banner of the Hurricanes organization, which he founded.

With Russ Burd (Rivera coached his son years ago, then recruited Burd to join him as a flag defensive coach), Rivera has taken Virginia Hurricanes select flag teams to the NFL nationals—the championships for the official NFL flag football league—seven times.

They’ve won the national championship three times—twice for the 14-and-under (14U) age group, and once for the 12U age group. The 10U and 12U teams qualified for the upcoming nationals in Nevada in January 2022, and the 14U team will compete to qualify in November. It’s an empire of sorts.

“Don’t let her get behind you,” stresses Burd, who prefers to stay behind the scenes. “Turn!”

Burd and Rivera work with girls between the ages of 8 and 15—some 80 of them spread across the Hurricanes Select flag program that includes 10U, 12U, 14U and, more recently, 9U teams.

Flag football got its start in Arlington more than 15 years ago under the husband-and-wife team of Bart and Barbie Gray. When the Grays moved to Farmville, Virginia, at the end of the 2017 season, Arlington County Parks and Recreation took over management of the local league. Rivera and Burd coach teams in the Arlington league, but also run a travel program with select teams of girls who travel to compete in tournaments.

In Arlington, as in other strongholds across the country, flag continues to gain in popularity. In 2020, the National Association of Intercollegiate Athletics (NAIA) recognized women’s flag football as a sanctioned sport. Fifteen colleges now offer flag programs and scholarships.

“It’s really grown here,” says Rivera, a law partner specializing in SEC defense work at Bass, Berry & Sims. He and Burd, a telecommunications consultant, are a key reason for that. They coach teams four nights a week and, of course, on weekends.

Wherever they go, across the country, “people know the Virginia Hurricanes,” Burd says.

Both coaches are quick to credit the players for that reputation. “What these kids have done here? They’ve done a tremendous job,” Rivera says. “I don’t think a lot of people understand what an accomplishment it is. The Hurricanes flag program is a national powerhouse. The players compete at the highest level of flag and win consistently. The game has exploded, and there are many more girls’ teams now across the country. The Hurricanes are still at the top. We have been blessed with players who are good athletes and dedicated themselves to becoming great flag football players.”

But of course, coaching is a big part of the equation. Because the tournament games are short (two 12-minute halves), the coaches have to quickly analyze the other team and figure out how best to counter. Burd adjusts the defense while Rivera figures out how to score on offense. The team has dozens of plays; Rivera suspects their playbook is larger than any other team in the country.

And then, there’s practice. “When I call the play, players know what to do because of their detailed preparation,” he says. Repetition through practice is critical. It’s resulted in the Hurricanes qualifying for the national championship every year since 2014.

Sienna Merrill, a rising freshman at Washington-Liberty High School, has been playing for Coach Mike and Coach Russ since she was in fourth grade. A linebacker and running back in flag, Merrill also plays soccer (her main sport) and basketball. “I grew up watching lots of football, but I only saw boys playing on the screen,” she says. “When Coach Mike told me he was building a girls’ football team, I realized I had an opportunity that I never thought I’d have.”

She recruited a number of friends to join her on the team. Now, at national tournaments, they meet NFL players and cheerleaders and play on turf fields with TV cameras filming.

Team parents are supportive of the coaches and say they appreciate the high expectations. Rivera and Burd coach both of Sara Kelly’s daughters in flag, and one daughter has played on Rivera’s AAU basketball team. “He pushes them and gives them confidence to reach their potential,” Kelly says. “He holds them accountable, which is why they’ve been so successful.”

Rivera and Burd correct mistakes when they see them—an incorrect passing pattern, a missed defensive assignment. They note when players react too passively or don’t run hard. “That’s the only way to get better,” Rivera says. “We run a tight ship and they know it.”

A sports fan (he loves the New York Yankees and the Pittsburgh Steelers), Rivera watches professional sports on TV. But for excitement—outside of his own daughter’s basketball games—it’s flag football that has his heart. “I take the wins and losses much harder than they do,” he says.

The wins keep coming, even when they lose. In Orlando in January 2020, the 14U team was seeded last after pool play—a rarity for the Hurricanes, who lost each round-robin game by a single point or in overtime. A low seed meant they had to take on the top seed first: the Texas Fury. “That was all we heard about, Texas Fury,” Rivera says. “But the girls got together and said, ‘We can do this.’ ”

They beat the Fury, then the Tucson Turf, and finally Staten Island to claim the championship. The season ended in triumph and screams. “We went from as low as you can go to as high as you can go in a day,” Rivera says.
This year, the high continued when the 12U Virginia Hurricanes team went undefeated in the tournament and won the national championship in Tampa.

What does Rivera like best about coaching? “I like watching them get better,” he says. “I just love the game.”

Madelyn Rosenberg is the author of One Small Hop (Scholastic) and other books for children. She lives with her family in Arlington.

Related Stories:
Firefighting Is For Girls
Sydney Barta is Going for Gold
She Paved the Way for ATMs. And STEM for Girls.