Gelato With a Mission

Amore Congelato serves up artisanal cups and cones with messages about social justice. 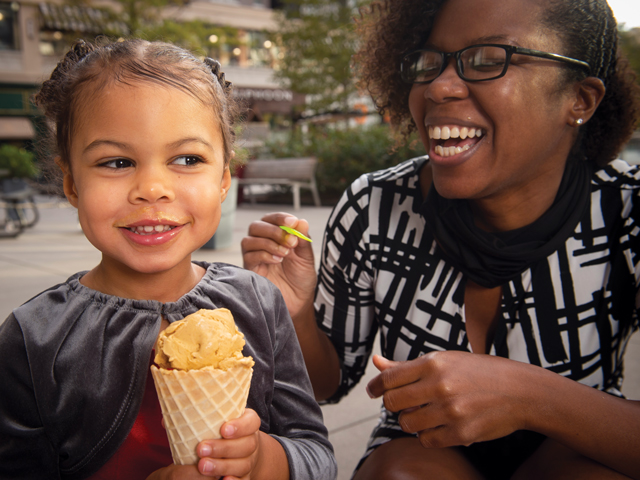 Thereasa Black and her daughter, Isabella. Photo by Lisa Helfert

Thereasa Black credits her daughter, Isabella, 4, with her decision to forgo a legal career and open a gelato shop instead. Amore Congelato arrived in Pentagon Row (now known as Westpost) in late-December 2019.

After four years of active duty in the U.S. Navy, ending in 2014, Black came to Washington, D.C., to attend law school at George Washington University. She graduated in May 2017 and passed the Maryland bar that same year. In 2018, she was deployed as a reservist, for 13 months, to a combat zone in Djibouti in East Africa. She and Isabella moved in with a cousin a month before she left.

“I threw [Isabella] a birthday party on the night before I left. I’m strict about sugar, but I made ice cream cake and she loved it,” says Black, 34, who cried every day that she was away from her daughter. “It took me a day to realize I could never deploy again and couldn’t work 80 hours a week as a new attorney. That’s when I decided to start my own ice cream business.”

While deployed, Black researched her intended career shift. She settled on making gelato because she considered it superior to ice cream—it’s naturally lower in fat and is denser. (There’s less air in it, so the flavor is more concentrated.) Upon her return to the U.S., she started experimenting with a small commercial gelato machine, took gelato-making classes and perfected her recipe. In lieu of cane sugar she uses organic date syrup, a natural sweetener fortified with vitamins and antioxidants that’s lower on the glycemic index. Some of her gelati are made with oat milk.

“Our gelato has 21 grams of protein per pint, and 47% less fat than other premium ice cream,” says the chalkboard menu at Amore, where the flavors include s’mores, banana pudding, salted-caramel pretzel crunch and chocolate turtle. Pints are $14.

Some may find that price high, but quality costs money. “I don’t use premade mixes. I make everything from scratch—the cobbler, the turtles,” Black says. “I couldn’t afford a big pasteurizer, so I make small batches.”

The packaging for Amore’s pints includes factoids, such as this one on her best-selling We Woke (chocolate espresso) gelato: “412,000 innocent people sit in jail daily. Many are there because they can’t afford their bail, in violation of the Constitution’s prohibition against excessive bail.”

“My mission,” explains the entrepreneur, “is to spread knowledge about social injustice.”

She says her own childhood in Lebanon, Pennsylvania, steeled her resolve to fight for change. “There were KKK rallies in my backyard. When I came to D.C. for law school was the first time people saw me, not my skin. I was finally able to be seen as Thereasa—not the Black girl in the class. I felt accepted.”

Amore Congelato means “frozen love” in Italian, but the feeling you’ll get from tasting it is warm and fuzzy.