Get These Burgers While They’re Hot

Gee Burger, a pandemic pop-up, gets the thumbs up from our dining critic. But the concept may not be here to stay. 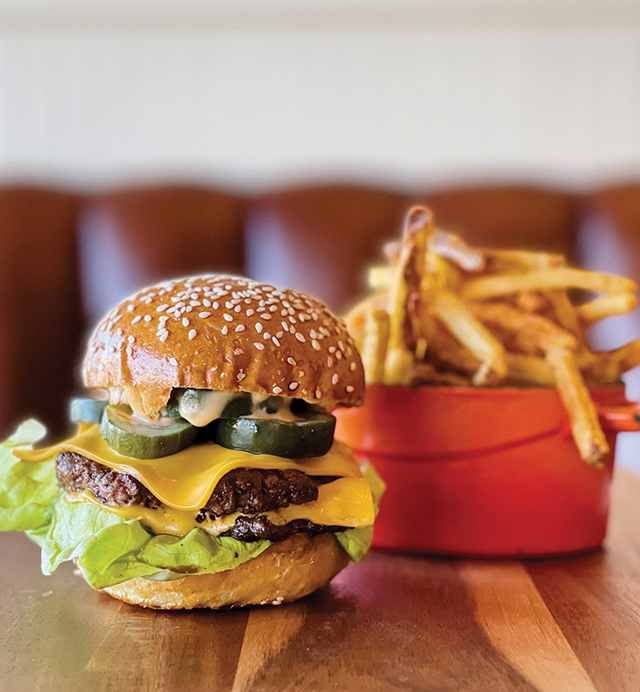 Banking on the notion that a burger is never a bad idea (agreed!), restaurateurs Ian and Eric Hilton and chef Brendan L’Etoile rolled out a ghost-kitchen burger concept in February. Gee Burger operates out of three of their Northern Virginia restaurants: Parc de Ville in the Mosaic District; Solace Outpost in Falls Church City; and Café Colline in Arlington’s Lee Heights Shops.

L’Etoile uses Allen Brothers 20%-fat ground chuck to make his burgers, which are served on toasted sesame seed buns from Uptown Bakers in Hyattsville, Maryland. Most of the offerings are made with two 3-ounce patties smashed on a flattop griddle. “We cook them that way because we don’t want to be in the temperature business, especially when dealing with third-party app deliveries,” says Ian Hilton. “There’s nothing more angering than a bad burger.”

No complaints on my end. I ordered the Oh, Gee! Burger, topped with American cheese, Bibb lettuce, house-made pickles and a secret sauce that, if I had to guess, includes mayo and kimchi. It’s plenty juicy and quite delicious.

Gee Burger emerged as a new source of revenue during the pandemic. “I have no idea what the life span will be,” Hilton says of the concept. “It’s something I’ve never done before and it’s kind of fun, but there’s a one in a hundred chance it becomes a new brand for us.”

Eat ’em while you can get ’em. Gee Burger is currently available for delivery though DoorDash, Uber Eats and Grubhub. Café Colline offers walk-in and takeout orders during select hours.

“We’ve All Been Through It This Year”
8 New Restaurants That Opened During the Pandemic
D.C. Restaurateurs Ian and Eric Hilton are Making a Big Play in NoVA