One reason girls so often favor subversive forms of sabotage (and fail to intervene on behalf of victims), Simmons says, is that they are ill-equipped to handle confrontation. Parents, teachers and coaches expect them to be “pleasers” and “nice girls,” even as they swim the piranha-infested waters of their teen years. They end up internalizing that message to mean that they must make everyone around them happy—often at their own expense.

“Girls learn somewhere around late elementary school that it’s not acceptable to be angry with your friends or to challenge or confront them openly,” Simmons explains. “So they resort to indirect and unhealthy ways to manage their feelings.” Rather than verbalizing their dissatisfaction with a situation, they might project their feelings of anger or insecurity by whispering behind others’ backs, spreading rumors, or ganging up on one girl whom they perceive as defenseless—for example, by creating a hate web site.

Katrina, a McLean mom and past PTA president whose two daughters have been victims of bullying, agrees that the paradigm needs to change. “As a mom, I went too far saying, ‘Be kind, always be kind,’ ” she says. “Girls need to have a backbone. They need self-preservation skills.”

Parents often tell their kids to “just ignore” a bully, but this “does more harm than good,” says Samantha Kramer, a counselor at Longfellow Middle School in McLean—particularly when the silence is perceived as acquiescence. Instead, she says, we should teach girls to say, “Please don’t say that to me” or “Please don’t do that to me.”

Experts are quick to add that the patterns girls develop as teens can stretch far into adulthood. “Girls’ not being able to tell their friends or their coaches or their parents how they really feel becomes a professional leadership problem 10 years down the road,” Simmons contends. She is now studying how the residual demons of adolescence affect women and their career success later in life. Women who fail to develop strong relational skills are  less likely to ask for raises or to take jobs that might involve confrontational situations. 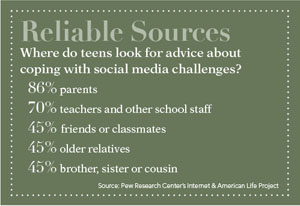 Although bullying is not a new problem, the rise of social media has created unfamiliar territory for parents and educators who struggle to keep pace with today’s weaponry of choice.

“Social media has allowed girls to explore their identities in very exciting new ways,” says Laura Sessions Stepp, an Arlington resident and Pulitzer Prize-winning journalist for The Washington Post. She’s the author of Unhooked: How Young Women Pursue Sex, Delay Love and Lose at Both. “[Girls] can remain connected to their friends, no matter where those friends are, but the dangers are extraordinary as well.”

Platforms such as Facebook, Formspring and Twitter have become almost addictive for girls who crave close friends and constant reassurance to maintain a sense of value.

“If someone ‘likes’ your post [on Facebook], you feel like you’re still a member of the community. You feel as though people still care about [you],” says Kara, a recent Arlington high school graduate. She is quick to acknowledge, though, the questionable value of a “like.”

“There’s a lot more pressure now to expand your social circle and to project a certain image,” she says. “You’re expected to be happy, funny, have lots of friends, to be pretty and involved.”

For many girls, Facebook and other social networking sites are one more mirror they have to gaze into every day. And the reflection they see isn’t always kind—or accurate.

“Because [the Internet] makes relationships public and tangible, it exposes girls to heightened levels of insecurity and anxiety about those relationships,” Simmons says. “They can see when they’ve been excluded. They can see their status in a way they never could before.”

For aggressors who would exploit those insecurities, social media has opened up a whole new arsenal of humiliation tactics. Sometimes it’s a camera phone “crotch shot” of a girl getting on a bus that is posted online. Or a text message rumor that goes viral.

Reckless comments on Formspring (which allows users to post anonymously) have been associated with several teen suicides. This fatal phenomenon has given rise to a new term in the counseling lexicon: “bullycide.”

“The ability to post anonymously is the real ugly,” agrees Lynne, a Falls Church mom. “Old-fashioned bullying takes thought and planning. With social media, it’s spontaneous and instantaneous. Kids don’t have that filter that allows them to step back and consider what they’re doing.”