Leaving a Six-Figure Job Helped Me Find My Happy Place

Stuck in a job you hate? Sometimes it take a colonoscopy and a crisis to start over. 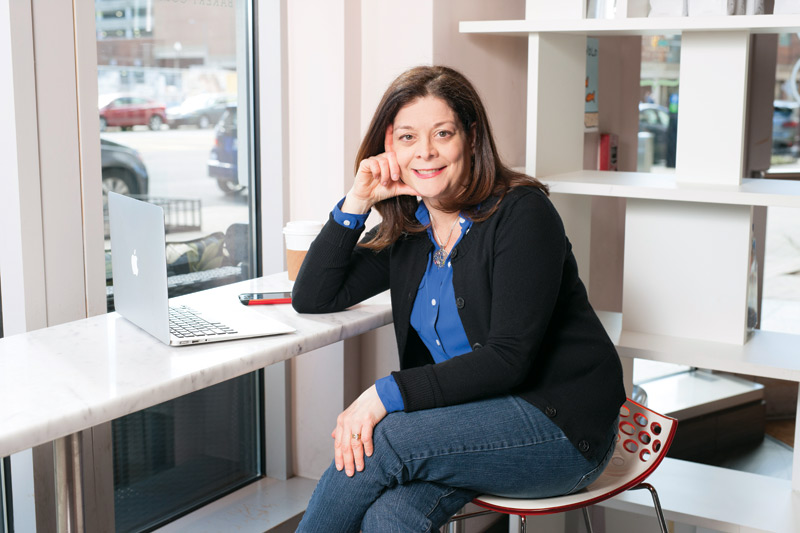 The writer at Buzz Bakeshop in Ballston. Photo by Stacy Zarin-Goldberg

Two years ago, I walked away from a six-figure career and found happiness. But it didn’t happen the way I had always imagined it.

I didn’t walk into my boss’s office and resign in the style of Johnny Paycheck (“take this job and shove it”)—even though I had imagined that sort of exodus on more than one occasion and in more than one job. Like the time my manager (herself a mother of three) sauntered into my office to chat about a big project, 10 minutes before I needed to leave for my daughter’s back-to-school night, and said, “You’ll thank me for giving you an excuse for missing it.”

Or the day a client demanded that I double-check the names and titles of 500 people in the span of an hour while simultaneously facilitating a webinar.

Or the case of the old-school boss who wouldn’t allow staff to work from home (or even from the Wi-Fi in the coffee shop next door) when our office went 48 hours with no Internet or phone service.
The dramatic departures I imagined making from each of those jobs were surely the stuff of country music legend, but that’s not how the story actually played out. Instead, relief from my 80-hour-a-week life as a government contractor came via an unexpected turn of events.

My husband, Wayne, went in for a colonoscopy. During his procedure, I worked feverishly from the waiting room and then surreptitiously from the recovery area, where I kept my laptop open so that I could hit “send” on an email I had just finished composing. It wasn’t until I heard the doctor say “very large polyp” and “schedule an appointment immediately” that I closed the laptop.

Suddenly, sending my client that 500-word blog post about the benefits of bioenergy didn’t seem all that important. I was scared by the gravity of Wayne’s diagnosis and the journey that lay ahead. As we left the hospital, the nurse grasped his hand and wished him good luck. I realized he was going to need me more than ever.

For two years, I had been the one leaning on him, hopping from one job to the next in search of career fulfillment. As my work/life balance grew progressively off-kilter, Wayne had taken on grocery shopping, cooking dinner, walking the dog, driving our 13-year-old daughter to lacrosse practice and helping her with homework—all while holding down his job of 25-plus years at the EPA.

It dawned on me that I had no handle on our family life. I never made it to school functions. I was forgetting to schedule things like pediatrician appointments and car inspections. (By the time I received a ticket, my inspection sticker had been expired for three months.) I wasn’t always present, even when I was in the same room with my family. My mind was often elsewhere, running down a mental list of checked boxes and deliverables.

Now here I was, four months into my fourth new job in two years, and still frantic. I didn’t feel I could take a leave of absence or use family medical leave. But when your spouse is diagnosed with colon cancer, the choice is simple. So I quit.

Amazingly, Wayne’s polyp ended up being early-stage cancer. He didn’t need chemotherapy or any other treatment beyond surgery, although complications would keep him hospitalized for 18 days. It was more than two months before he was strong enough to go back to work full time. (He would also need a second surgery in 2015.)

After he came home, I started working part time for a local business consulting firm. Initially, I worked two or three hours a day, using the remaining hours to focus on Wayne and all the other things (and people) I had been ignoring, including myself. I sat on the couch, read an entire book, took our daughter to the movies, strolled to Buzz Bakeshop for coffee and went for long walks on the Bluemont Junction Trail. I tried meditation (and discovered it wasn’t for me) and kept a gratitude journal for a few months (also not for me).

My stress level dropped and I started sleeping better, but I still wasn’t as happy as I thought I should be. The novelty of being able to do whatever I wanted quickly wore off as the reality of our lower combined household income sunk in. We had to cut back on discretionary purchases like meals out, sporting events and concerts.

Occasionally, Wayne would hint that perhaps it was time for me to look for full-time work. But every time I read a job description, I felt a wave of anxiety.

Friends would ask me what I wanted to do next, and I had no answer. At least not until I attended the funeral of my Uncle Mike, with whom I’d always been close. Whenever we had seen each other or talked on the phone, Uncle Mike would ask me about my job.

“Don’t you write anymore?” he’d ask, taking the conversation back to my early days as a newspaper reporter, when I made $20,000 per year.

“Don’t you miss telling stories? That’s what you always liked to do.”

He was right. After his funeral, I started writing again. Soon I had an essay published on a national parenting website. I’ve since accumulated more published clips, but I’m sticking to topics that truly interest me—things I care about.

That includes beer (Wayne is a home brewer); work/life balance (my recent job experiences provide much fodder for this topic); personal finance (a subject I actually know very little about but want to understand better); and Arlington, the place I’ve called home for 20 years.

Most weeks, I work about 35 hours. This newfound life as a freelance writer leaves me time to run errands and still be available to drive my daughter, a student at Kenmore Middle School, to JV lacrosse practice at Washington-Lee.

I’m not making six figures, but I am making enough for our family to once again enjoy some of our favorite things—like dinner at Lyon Hall and Ray’s the Steaks, concerts at Wolf Trap and tickets to Wizards and Nats games.

More importantly, Wayne is mostly recovered and back at work full time. He’s healthy. We’re in a different tax bracket. And we’re happy.