Lennie Cujé Sought Freedom During World War II. He Found It in Jazz

Born in Nazi Germany, he made his way to Arlington and went on to play with some of D.C.'s legendary musicians. 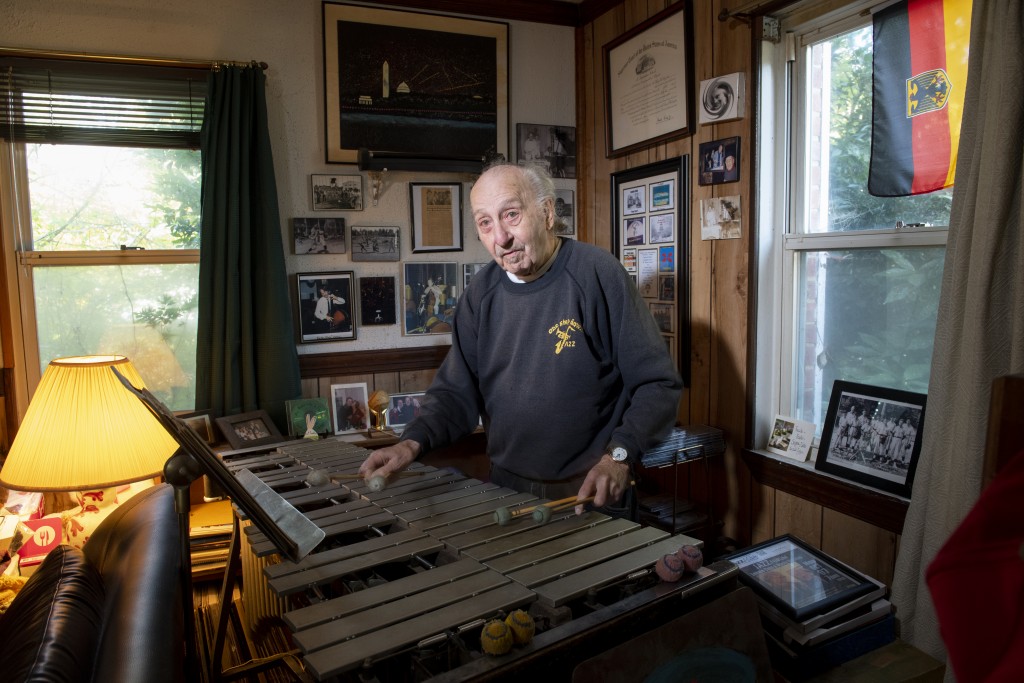 The walls of Lennie Cujé’s living and dining rooms are covered in memorabilia—photos of the many musicians he’s played with, signed notes from politicians, holiday cards and letters, special citations and more.

I’m leaning in to read an autographed photo of Bill Clinton that closes with “You are a true friend,” when Cujé draws my attention to another memento that he seems even prouder to show off. It’s a plaque given to him 20 years ago by students of what was then Washington-Lee High School (now Washington-Liberty), thanking him for sharing his music and his remarkable life with them.

Cujé, a renowned jazz musician, was born a few miles north of Frankfurt, Germany, into a musical family (his mother was an opera singer, his father an orchestra conductor) on Jan. 1, 1933, right before the world changed.

“I had 30 days of the old Germany before Hitler took over on January 30th,” he says. “I even got a medallion for being one of the first born in the Third Reich.”

Like most German boys of that period, he was conscripted into the Hitler Youth, where he received militaristic training and Nazi indoctrination. To him, the brutal tactics were suspect. “They drive you to the limit of endurance,” he says. “It’s almost sadistic. You get thrown in the mud in your uniform and then you get 30 minutes to get that cleaned up. It’s not a life. I didn’t know jazz then, but it was inside me already. Then I went to this music boarding school, which made it easier.”

During World War II, Cujé and his family were separated as the music school students were evacuated to the south of Germany. (His mother stayed behind in Frankfurt, while his father fought in Italy. Although they both survived the war, their marriage did not.)

By the end of the war, Cujé was a machine gunner for the German army. He was taken prisoner by the French but eventually was released to find his way home to Frankfurt, traveling some 300 miles with a friend. He was 12 years old.

On his way north, he heard jazz for the first time, emanating from a guardhouse radio at an outpost in the American occupation zone. To this day, he can remember the song: “Flying Home,” by vibraphonist Lionel Hampton.

“Freedom,” Cujé says, when I ask him what the song made him think of. “Freedom and improvisation, which I didn’t know. At first, I only knew Americans from bombings. But when I got to the American sector and there was that guardhouse and that music, that was it. And they gave me a pack of cigarettes and a chocolate bar.”

“At first, I only knew Americans from bombings. But when I got to the American sector and there was that guardhouse and that music, that was it. And they gave me a pack of cigarettes and a chocolate bar.”

In postwar Germany, Cujé led a catch-as-catch-can existence, selling items on the black market with a band of compatriots until 1950. That’s when his aunt Magdalena Schoch, who’d immigrated to America years before, sponsored the teen to come live in her house in Arlington. (His mother and siblings would follow a couple years later.)

Cujé enrolled in high school at W-L, where he became friendly with talented classmates Shirley MacLaine and Warren Beatty, even playing trumpet for one of MacLaine’s dance performances. “I had to learn to become a boy again,” he says. “I was suddenly among what seemed, to me, children, even though they were my age group. I was the first German many of them had seen.”

At the time, jazz was still largely an underground scene and associated mostly with Black musicians, but Cujé remained captivated by it. After high school, he was drawn to playing the vibraphone, a velvety mallet instrument—in the same family as the xylophone and marimba—that was a staple of jazz music.

He went to East Tennessee State University for college, where he studied music composition, and later found work in a pharmacy. It was one of many jobs he would hold over the years to pay the bills—a list that also includes cabdriver and construction worker—when the income from music was unreliable.

Returning to the D.C. area in the early 1960s, Cujé joined noted jazz musician Buck Clarke’s group on U Street NW. They went on the road, touring up and down the East Coast when they weren’t playing at the Republic Gardens nightclub downtown.

“I grew up musically on U Street,” he says. “At that time, to play jazz was not the thing to do. There was a big separation between Black and white, but the jazz always crossed over. So I got to know a lot of Black musicians. We’d be in Buck’s Cadillac, and it would be, like, five Black guys and one whitey—me. Some places we had to be careful. It was a different America. That’s where I got to learn to play jazz music, in the Black community and with Black musicians.”

“I grew up musically on U Street. There was a big separation between Black and white, but the jazz always crossed over.”

Cujé did a short stint in the U.S. Air Force during the Korean War, lived in New York and New Mexico for a time, and had a series of romantic relationships. I ask him how many times he’s been married. “Maybe three times,” he says. “It’s hard to be married to a jazz musician.”

During a low point after one breakup, his mother bought him a plane ticket to Germany to see his father, whom he hadn’t seen since the war. The visit settled him. “When I left Germany that time, I knew my home was here,” he says. “I had become an American.”

For much of the ’80s, Cujé was a fixture at D.C.’s venerable (now defunct) jazz club One Step Down, playing a regular Sunday night show with Steve Novosel, a renowned jazz bassist. He kept a standing gig in a posh Baltimore hotel well into the 2000s, where he got to know visiting Hollywood stars like Sharon Stone and Martin Sheen. But he’s not one to get starstruck.

“I didn’t know who these people were,” he says, “and it turns out they were famous.” By then, he’d met his musical savior, Lionel Hampton, several times, and had become friendly with the legendary Miles Davis, and many others like them.

At various points in his career, Cujé and his bandmates played for George W. Bush, Bill and Hillary Clinton, and Barack Obama. Between 2000 and 2013, he taught several workshops for students at W-L, the place that had taught him to be a boy again.

Now approaching 89, the once-itinerant musician has settled into a comfortable life in his aunt’s old house in Arlington’s Tara-Leeway Heights neighborhood (which she bequeathed to him upon her passing in 1987). His companion, Trish Russell, answers more than one phone call from his many friends while he and I are chatting.

Before I leave, I ask if he’d play the vibraphone that is still prominently set up in his living room. He kindly obliges, improvising a few mellifluous bars before agreeing to talk to another caller. This is clearly a man who always has another gig.

Kim O’Connell writes from her home in Aurora Highlands, where she is the No. 1 fan of her musical husband, son and daughter.

I Had Relatives on Both Sides of World War II. They All Loved Baseball

Through Tragedy and Triumph, Music Was a Constant for WETA Radio Host James David Jacobs