The memories remain, but the stuff has to go. 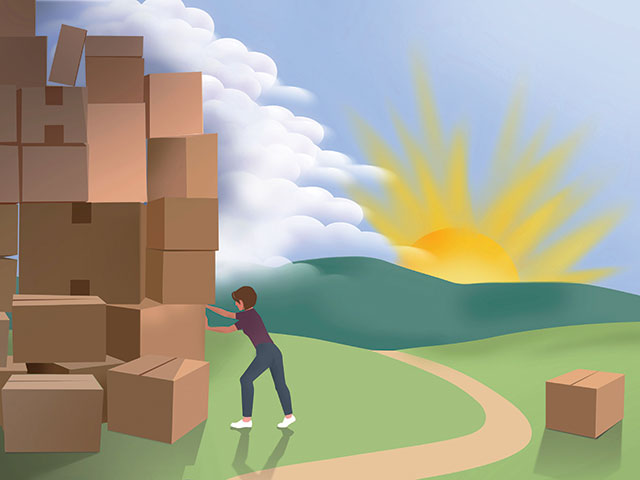 Last week I gave away two pillows I needlepointed in the 1990s. Later that day, I threw away my daughter’s newborn cap embossed with “Columbia Hospital for Women.” Yesterday I took a photo of a carving that sat on my dad’s desk when he was an Air Force judge, and then I disposed of the carving.

I’m not jumping on the Marie Kondo bandwagon. In fact I have yet to watch the Netflix series or read her book. It’s not that these items don’t bring me joy—it’s just that they don’t need to accompany me on the next step of my journey.

I’m downsizing and I take the charge seriously. I’m moving from a three-bedroom house, with a sunroom and a garage, in Arlington’s Rock Spring neighborhood, to a well-appointed two-bedroom apartment in Falls Church City with about one-third of the square footage. You won’t hear me whining. I’m delighted to give away the snow shovel and toilet plunger I’ve clung to for the last 14 years. I’ll happily wave goodbye to my suburban neighborhood (though not my friends) as I head to an apartment within walking distance of dozens of restaurants, shops and parks. I can shop at Harris Teeter without ever leaving the building.

But, my friends ask, what about all my stuff? Like everyone’s stuff, mine is filled with memories. Still, I have happily let go of my child’s third-grade essay about prairie dogs, my own high school yearbook, and souvenirs purchased from Abuja to Jakarta to Tokyo. They do bring me joy. But that joy can be committed to memory and photos. I don’t need to carry every object that has had meaning into the rest of my life. In fact, my life will be enriched if I jettison them.

I know this because I am halfway through the process of purging my house and I feel lighter and happier already. There is joy in knowing that my next home will be lightly decorated, that the closets will be only half-full, that I am not taking bookcases or chests with me. Those pieces of furniture are designed to hold things, display things, amass things and I don’t want to do that anymore.

I have always envied people who travel internationally with only one small carry-on bag. They are able to bypass the wait at baggage claim and never have to worry about lost luggage. I imagine they spend their travel days sightseeing rather than shopping. I aspire to join their ranks. I want to be one of those people who doesn’t need a spreadsheet and several months to move residences. I want to carry my memories in my head rather than in large crates.

And so I am preparing to move from the home in which my daughter survived middle school angst, where she returned from prom with wide-eyed wonder, where she awaited the news of college acceptances. It is a home that will be bulldozed to the ground and where a larger, newer one will go up—a mini-mansion that is sure to be filled with more stuff than I can even imagine. Where new memories will be made and preserved in stuff.

Parenting is a slow process of letting go. As we let go of the infant, we appreciate the increasing skills of the toddler, and then the delightful interactions with a preschooler. For every step we let go, we gain five more.

So it is with aging. Our bodies become less nimble, and often our minds do, too. But we can compensate by ridding ourselves of all the stuff that confines us, that holds us in place, that prevents us from soaring. We don’t lose the memories as we find new ways of retaining them that don’t require shelves. And we release ourselves—with joy—into a place where we can move more freely.

Show me a trash can and I’ll show you the world.

Tamar Abrams moved in March and has never been happier. She will retire in January from her job with the United Nations Foundation to spend more time writing, helping her elderly parents declutter, and preparing for her daughter’s wedding.

Clean House, Support a Good Cause

Where to Recycle Those Old Clothes