Chef Cathal Armstrong pays homage to his Dubliner grandparents at a new pub in Westpost. 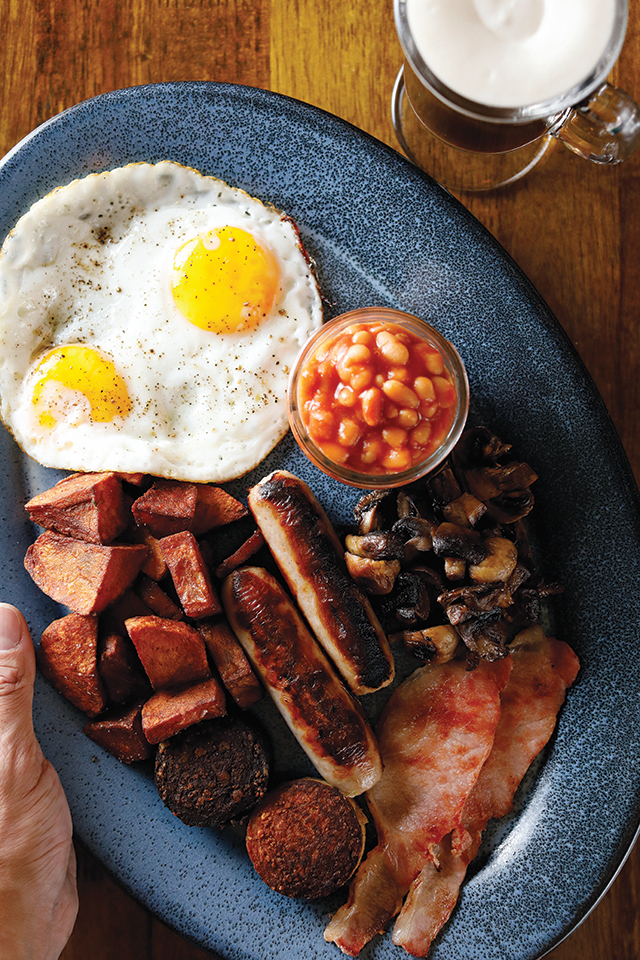 I would gladly adhere to the maxim that breakfast is the most important meal of the day if the meal in question were the Irish breakfast at Mattie & Eddie’s, the Arlington bar and restaurant chef Cathal Armstrong opened in March. That offering—available all day, no less—includes two eggs any style, baked beans, sautéed tomatoes (or roasted mushrooms when tomatoes aren’t in season), pan-fried potatoes, house-baked brown bread and a panoply of pork products, including black pudding, white pudding, bangers and Irish bacon. It’s a visual and gustatory feast that covers all the real estate on an earthenware platter large enough to hold a roast turkey.

Armstrong, 52, also co-owns Kaliwa at The Wharf in Washington, D.C., and Hummingbird in Old Town Alexandria. The latter neighborhood is where he garnered a reputation for superlative Irish fare at two previous spots: Restaurant Eve (2004-2018), where he applied high-style French technique to humble Irish dishes; and Eamonn’s, a Dublin Chipper (2006-2019), a fast-casual fish-and-chips joint.

An eight-time James Beard Foundation nominee for Best Chef Mid-Atlantic, Armstrong also wrote the book (well, a book) on Irish cooking. His memoir/cookbook, My Irish Table: Recipes from the Homeland and Restaurant Eve (Ten Speed Press, 2014), from which many of Mattie & Eddie’s dishes are derived, is on full display at the new pub. (Full disclosure: I co-authored said book with him.)

But that’s not why he opened the place. In truth, launching another restaurant was the last thing on the chef’s mind during the pandemic. He, like so many others, was just trying to keep his existing businesses afloat when the Irish bar Siné closed its doors in Westpost (the area formerly known as Pentagon Row), and the property’s landlord, Federal Realty, sought him out. They struck a two-year deal. “We signed on Feb. 22 [2021] and opened on March 24, so we did an eight-month project in five weeks,” Armstrong says. “They gave me a good deal, rent-wise, but that was as far as they were willing to go.” 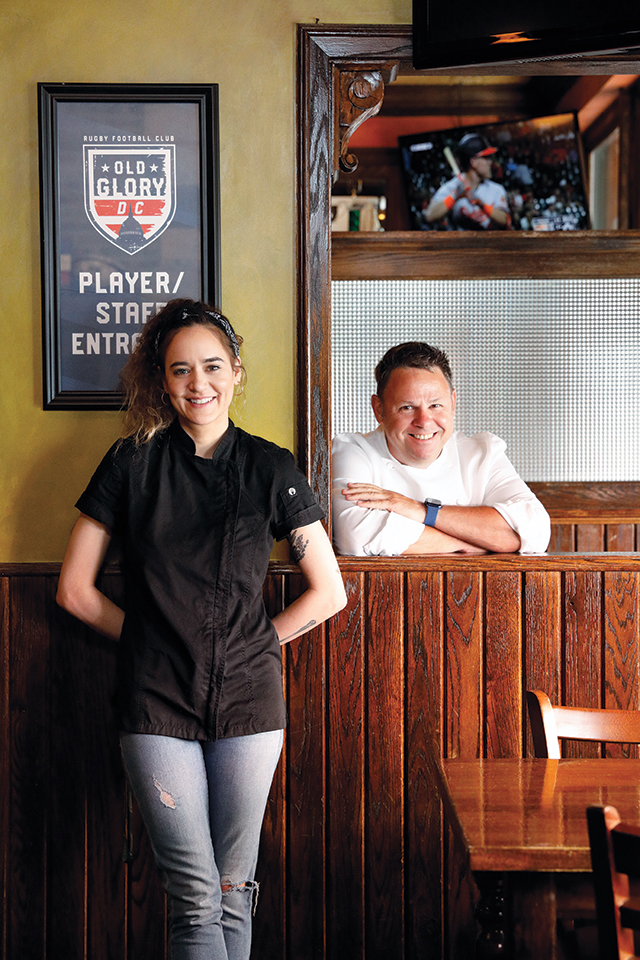 That means don’t expect much in terms of new décor when you visit Mattie & Eddie’s. The vast, 6,600-square-foot space still has a preponderance of dark wood paneling, private booths with worn-velvet banquettes, a large bar with several TVs, and plenty of bric-a-brac throughout its many rooms, which collectively seat 200. (Two patios accommodate 100 more outside.)

Armstrong did trade the former occupant’s hockey paraphernalia for rugby gear and invested in a thorough cleaning from top to bottom, bringing in a Guinness expert to dismantle the draft beer system and replace all the taps and lines. He’s also added live music, Thursday through Saturday from 7 to 10 p.m., and a “traditional session” of live Irish music on Sundays from 4 to 7 p.m.

In some ways, the pub’s well-worn patina imparts a comforting familiarity. The chef’s Irish upbringing often centered around the pleasures of the table—particularly Sunday dinners at his grandparents’ tiny three-bedroom house in Dublin’s inner city. That’s where Martha and Edward Armstrong (known as Mattie and Eddie to friends; Nana and Granda to their grandchildren) made curtains for a living and raised Armstrong’s father and five siblings. The chef designed his menu to emulate the kinds of dishes that came from Nana’s kitchen.

Twenty-eight-year-old Casey Bauer, who worked for Armstrong at Kaliwa, is the chef de cuisine at Mattie’s and does an admirable job, for the most part, of re-creating her boss’s specialties. Shareable snacks such as a chicken liver paté spiked with brandy, or a sardine spread packing some cayenne heat (misleadingly called “sardines on toast” even though the fish are not visually discernible) are nice accompaniments to a pint of Guinness or Harp, or a cocktail. I quite enjoy the Bloody Mary-esque Caesar cocktail made with vodka, Clamato juice, Crum’s Nectar hot sauce and celery salt.

For a first course, the smoked haddock soup, rife with flaked fish, steamed mussels and clams in a buttery, dill-accented broth, is so sublime I’d happily eat it in the middle of a heat wave. A heaping, lemony bowl of steamed mussels and cockles is similarly soul-satisfying and a good dish to share with a dining companion.

Moving on to mains, you can’t go wrong with Armstrong’s fish and chips, a dish he perfected for mass-marketing at Eamonn’s and serves with seven sauces—among them, Chesapeake (think Old Bay); hot chili; tartar; a ketchup-and-mayo-based Marie Rose; and curry. A flour and cornstarch batter made with club soda creates a delicate but durable coating that seals the cod so that it stays moist when deep-fried. For the chips, russet potatoes are stored for weeks (a practice that ups their starch level) before they are cut into chunky batons and shuttled through an elaborate cooking process that involves overnight soaking, blanching, refrigeration and then frying to order. The resulting fries are crisp on the outside, fluffy on the inside.

Armstrong’s knowledge of French culinary techniques, which he honed during the 10 years he worked for acclaimed D.C. chef Jeffrey Buben, is evident in his preparations. For his version of corned beef and cabbage, the beef is cured for 10 days in a spiced brine, then braised for several hours. A neatly trimmed (and gargantuan) square of it—plenty for next-day sandwiches—is served with bechamel sauce, boiled potatoes and cabbage confit that’s been slowly braised with butter. 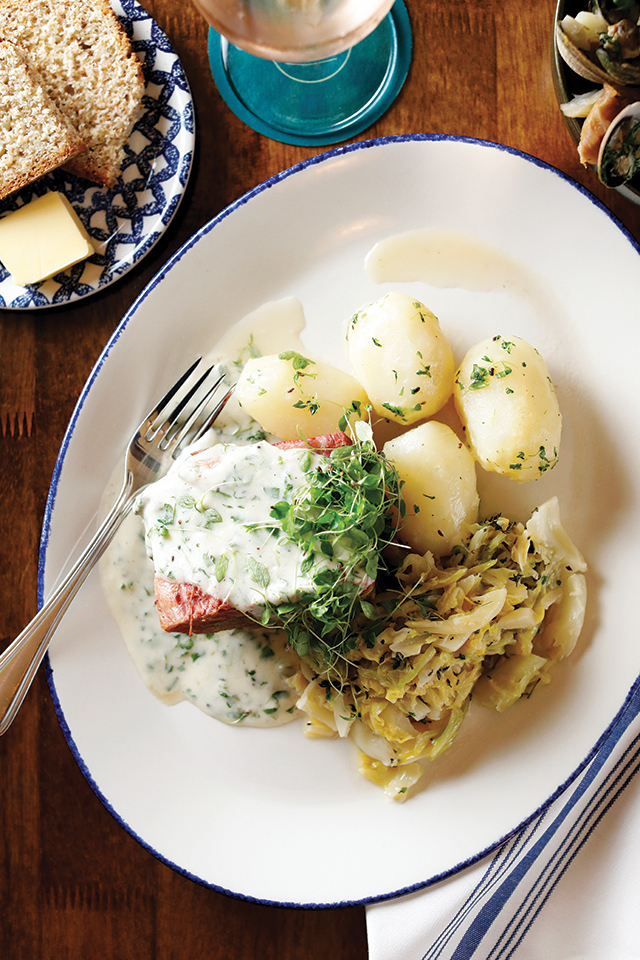 The lobster pot pie arrives piping hot in a crock topped with a shiny chapeau of puff pastry. When breached with a spoon, the flaky crust reveals a heady trove of claw and tail meat, carrots, potatoes and parsnips in a rich lobster sauce flavored with African blue basil.

The brown bread served with many dishes at Mattie & Eddie’s, with its delicate crumb and whole wheat depth, is so good it deserves special mention. Pastry chef Josh Jarvis oversees the bread and dessert program at Kaliwa and Mattie’s, where his pan-fried bread pudding (made with brown bread and batch loaf, an Irish sandwich bread) comes with a salty toffee sauce. The sauce is deftly cooked to the brink of burning, which enhances its caramel complexity.

As I return to writing reviews after a 16-month hiatus, I can’t help giving restaurants a wide berth when I spot shortcomings. I’m all too aware of the obstacles they still face, including high food costs, industry-wide staffing shortages, tremendous stress and, in many cases, staggering debt in the wake of pandemic restrictions. Diners may think everything’s back to normal, but it isn’t.

Not everything is perfect at Mattie & Eddie’s. An interior paint job would go a long way toward brightening up those drab interiors. Food-wise, I’m not sure why rosettes of Irish smoked salmon are served in a bowl of salad. A pork belly entrée billed as “crispy” falls short on that promise due to a flabby surfeit of fat, although its sidekick of colcannon—luscious mashed potatoes laden with butter, cream and kale—is splendid.

There are some service issues, too. But when bartender Mairéad Harnett delivers cheery “Hi, loves” and “Here you go, sweethearts!” in her County Limerick brogue while handing over bountiful plates of Irish breakfast and fish and chips, those quibbles seem to wither away. 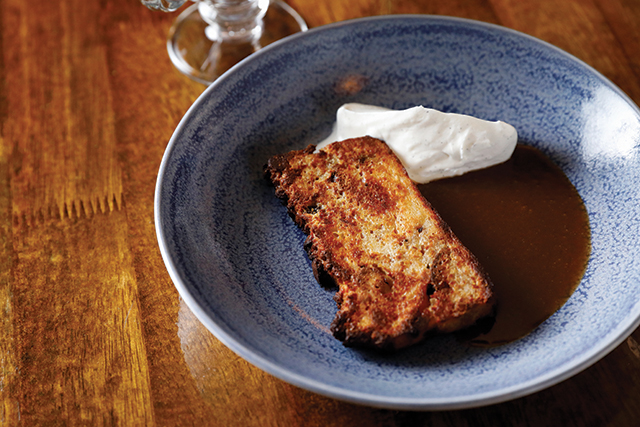 When in Ireland (or at least an Irish bar), go for an Irish draught ($8), such as Guinness stout, Kilkenny Irish cream ale, Harp lager, Smithwick’s red ale or Magners Irish cider. Also good is the selection of mixed pints (think Guinness and Harp, Harp and Magners or Guinness and DC Brau).

Related Stories:
8 New Restaurants That Opened During the Pandemic