Katherine and Gabe Thompson have created the kind of restaurant every neighborhood craves. 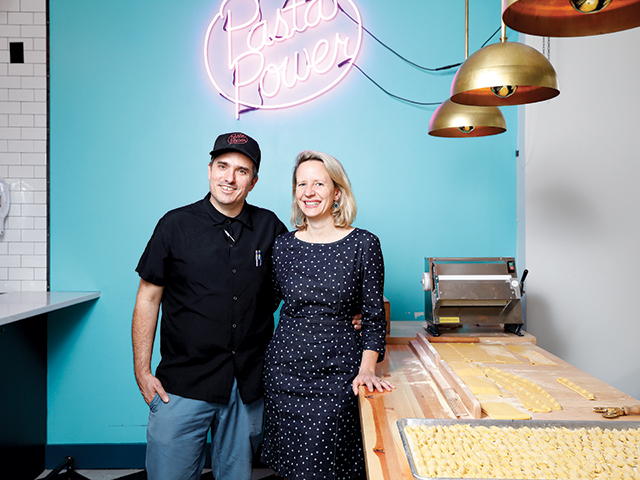 It’s not often that the very first bite of a dish kicks your neurons into rapid fire, grabs your taste buds by the lapels and screams to your brain that something extraordinary is happening. I had this experience at the restaurant chef Gabe Thompson and his wife, pastry chef Katherine Thompson, opened in August in Falls Church. During dessert. More than once.

Those neurons pinged over and over, like a pinball racking up points, whether the source of my delirium was Katherine’s ethereal panna cotta with cabernet pear sorbet, homemade gingersnap crumbles and pears marinated in lemon syrup and pear brandy; or her Madeira-laced olive oil cake topped with creme fraiche mousse and a compote of raisins soaked in Grand Marnier caramel syrup. Chocolate fans will melt over her chocolate-hazelnut torta, a three-layered delight of hazelnut dacquoise (meringuebased cake), Nutella and feuilletine (crispy crepe cookies), topped with fudgy ganache and served with hazelnut ice cream and candied hazelnuts. 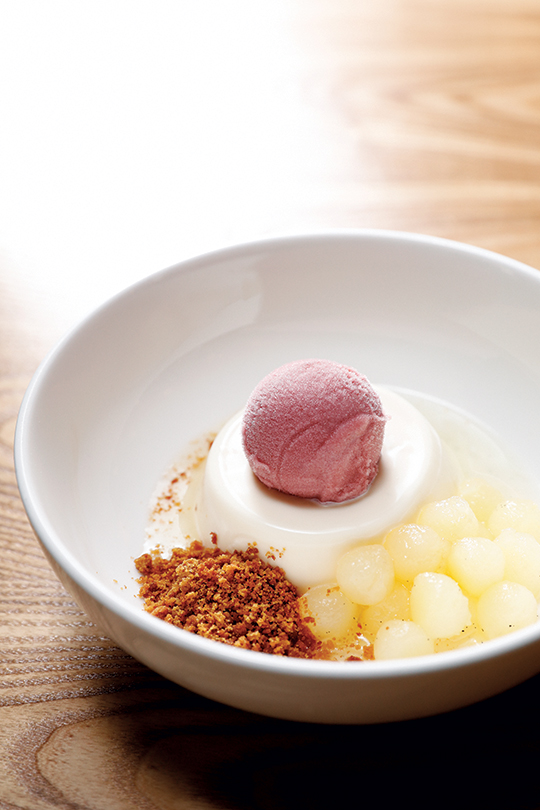 This is not to take anything away from Gabe’s superb savory cooking—which I will get to shortly—but if you’re the kind of person who doesn’t save room for dessert, you might consider starting with that course and working your way backward.

The Thompsons (he’s from San Antonio; she’s from Arlington) have sterling bona fides in the restaurant world. Both are culinary school graduates who sought success in New York City and found it—Le Bernardin, Per Se and other well-known Manhattan spots pop up on their résumés. The two met in 2007 through a mutual friend at Del Posto, married in 2008 and then teamed up to launch several restaurant projects of their own in the West Village— dell’anima, L’Artusi, L’Apicio, and a wine bar, Anfora. In 2014 they co-authored a cookbook, Downtown Italian. They also had two kids and decided it was time to leave New York.

In 2015, the family moved to Katherine’s hometown (they now live in Arlington Forest) after Gabe landed a job as executive chef at RPM Italian on K Street in the District. But their dream was to open another restaurant, close to home. They looked at the former Argia’s space in Falls Church City in 2017 and signed a lease there a year later. 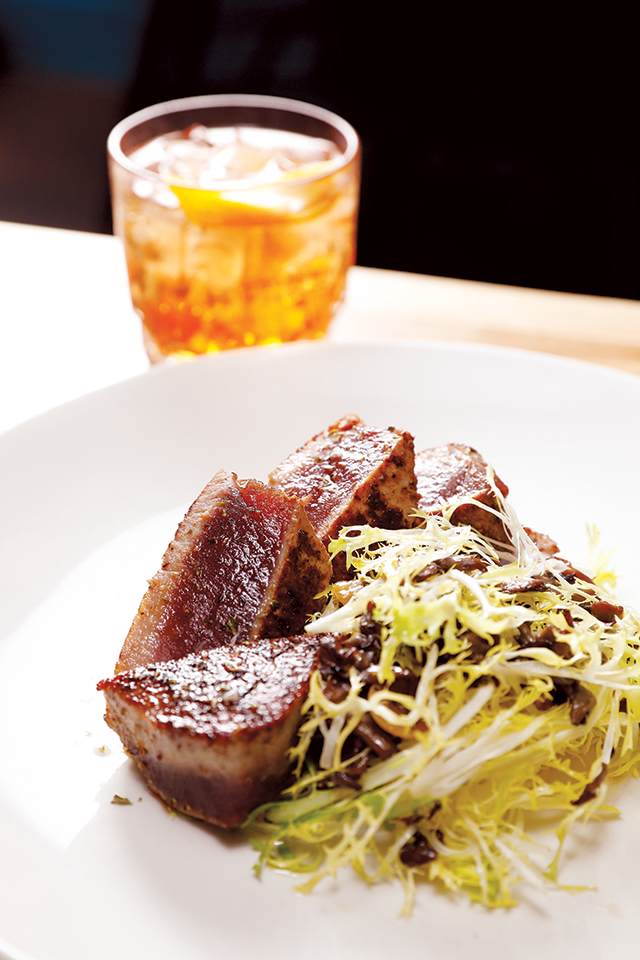 Thompson Italian’s rustic, American trattoria feel takes its cues from the couple’s former New York restaurants, with soft lighting, wainscot beadboard and cushioned banquettes. The restaurant is a relatively intimate 3,500 square feet with seating for 70 inside, 30 in the bar and 20 outside on the back patio. “It’s a nice size for us. Not too big, not too small,” Katherine says. “Falls Church is such a great community. People ride their bikes to us. There is momentum to support businesses here.”

In the dining room, three canvases by Katherine’s father, local artist Michael Lahr, double as soundproofing panels, joining forces with ceiling panels to keep the decibel level manageable. (Praise be the soundproofing, but the full dining room is still quite lively.) On the bar side, stylized concert posters hang opposite a neon “Pasta Power” sign. “Dad designed that, too,” Katherine says of the sign. “Free labor!” 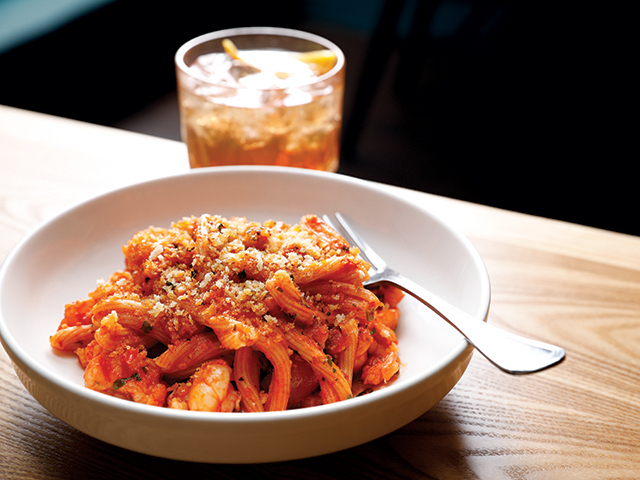 Gemelli with shrimp and breadcrumbs. Photo by Jonathan Timmes.

An evening at Thompson Italian begins with a warm greeting at the door and another at the table. The cocktails are seasonal, so the bracing quaffs that heralded the restaurant’s late summer debut have since given way to winter weather comforts like Sage Against the Machine, made with bourbon, sage, black pepper and angostura and orange bitters. Order garlic bread with your drinks; the focaccia slices are slathered with roasted garlic and baked until the Parmesan cheese forms a golden crust.

For starters, octopus slowly braised in olive oil and bay leaves, charred a la plancha and served with a salad of roasted potatoes, green olives, pickled peppers and almond pesto, offers a delightful balance of saltiness, richness and texture.

A fritto misto of calamari, hot peppers and lemon slices is a fine rendition of the trattoria classic, even if the lemon slices could have been thinner—that’s a lot of rind to eat otherwise. Similarly, the components of a bright, straightforward fall salad of apples, fennel, celery and red onions could have been sliced with more precision to look less like something you’d make at home. 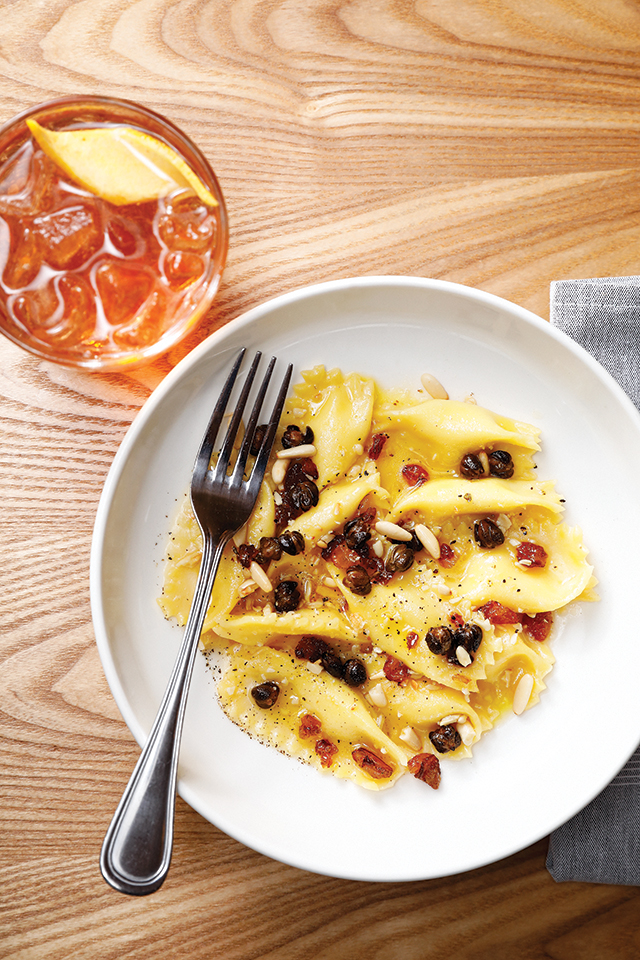 Gabe Thompson exerts plenty of “pasta power,” starting with making nearly all of his pastas in-house. The quality of a Bolognese sauce is always a good litmus test for Italian cooking, and his passes with flying colors—rich, slow-cooked and rife with ground Chapel Hill Farm Randall Lineback Ruby Veal and Roseda Farm beef, finished with butter and Parmesan. It clings perfectly to fresh pappardelle noodles that have just the right amount of chew.

Another winner is the twisted housemade gemelli with a piquant tomato and Calabrian chili sauce, shrimp and breadcrumbs.

The star of the pasta list, though, is ravioli filled with cauliflower, mascarpone and Parmesan cheese and topped with toasted pine nuts, raisins and capers. This dish is a beautiful blend of sweet and savory.

Among the meat and fi sh courses, the standout is the market fi sh, which, in my case, was medium-rare tuna, seared in a blackened porcini and oregano crust, sliced and served with sautéed hen-of-the-woods mushrooms, celery purée, frisée lettuce and a drizzle of olive oil. (The chef finishes many dishes with estate olive oils from Tuscany, Sicily or Abruzzo.)

Another entrée finds whole boneless chicken breast, its crispy skin deftly rendered of fat, sitting atop a stew of tomatoes, kale and chicken sausage. It’s interspersed with large focaccia croutons that soak up the juices, making this lovely provincial dish hearty and rib-sticking. Just don’t eat all of it, because you have to save room for dessert, right?

If my descriptions of Katherine’s panna cotta and olive oil cake failed to tempt you, perhaps her cannoli will. The thin, crispy cylinders of fried pastry dough are filled to order with ricotta cream, tiny chocolate chips and housemade candied orange peel, then dipped in chopped pistachios at both ends. “They’re a bitch to make,” she admits. But they are oh so easy to devour. 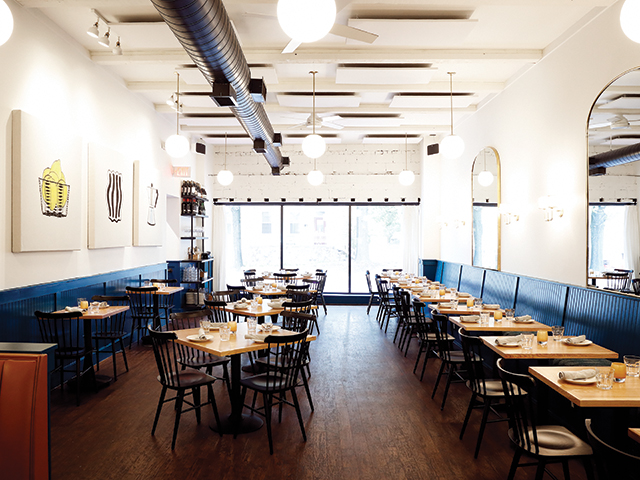 Chef-owners Gabe and Katherine Thompson oversee Thompson Italian’s libations list with the same eye to detail as their food menu.

Bartender Hector Haran has put together a fi ne seasonal cocktail menu that might feature a cucumber-infused gin and tonic in warm weather, and a cranberry-rosemary number with vodka and prosecco in the fall.